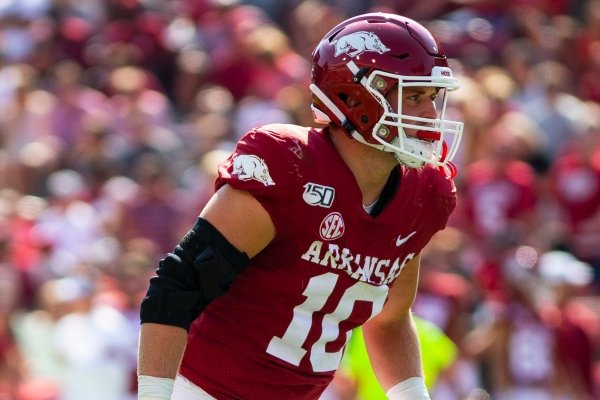 FAYETTEVILLE -- The University of Arkansas added a couple of linebackers and another defensive end to its injury list after Saturday's 55-34 victory over Colorado State.

Coach Chad Morris said sophomore Bumper Pool, the starter at weak-side linebacker, is day to day with a clavicle sprain on his left side. Pool left Saturday's game after the Razorbacks recovered a fumble on the first play of the second quarter.

Junior Hayden Henry, who had one of the game's biggest hits, did not return after suffering a shoulder injury on the play late in the fourth quarter. Henry blasted Colorado State running back Marvin Kinsey, forcing a fumble that LaDarrius Bishop scooped in stride and returned for a 25-yard touchdown to cap the scoring.

"He got his shoulder kind of banged up a little bit," Morris said at the end of his Monday news conference. "We hope he is [going to be OK]."

Freshman defensive end Zach Williams, who posted two tackles against Colorado State, will be out for a couple of weeks after injuring his knee against the Rams, Morris said, projecting the Little Rock native could be back after the Hogs' open date Oct. 5.

Williams goes out just as senior Jamario Bell is expected to rejoin the unit. Bell has missed the past two games with a knee injury he suffered in the 20-13 season-opening victory against Portland State.

Pool had a team-high 15 tackles entering Week 3, but he now ranks third on the team behind safety Kamren Curl (22) and linebacker De'Jon Harris (21) with 19 tackles.

"We anticipate him being back," Morris said. "We'll wait and see how it goes."

Pool appeared to be hurt late in the first quarter after landing on his shoulder.

"He landed on it, and then the adrenaline was still running," Morris said. "Then once we created a turnover, I think he got real excited and pumped his fist and when he did he kind of felt like, 'OK, maybe the adrenaline wore off a little bit,' so that was it."

[Video not showing up above? Click here to watch » https://www.youtube.com/watch?v=1NViqipWdAU]

Senior kicker Connor Limpert was named SEC special teams player of the week by the league office Monday for his performance in Saturday's victory over Colorado State.

The left-footer from Allen, Texas, went 2 of 2 on field goal tries, including a 54-yarder that tied for the second longest of his career.

Limpert had five touchbacks on his 10 kickoffs, and the Rams executed fair catches on three other kicks. Limpert averaged 57.2 yards per kickoff.

"It was awesome, man," offensive coordinator Joe Craddock said of Limpert's 54-yarder in the second quarter. "I sent Connor a text Saturday night. I said, 'That was big time.'

"I'm going to be honest, I was a doubter. I didn't know if he could hit it. He drilled it. I think the ball hit the Hog Pen back there. It hit the fence. I mean, he killed it. I think it would have been good from 60-plus."

Limpert is the first Razorback to be SEC special teams player of the week since De'Vion Warren on Oct. 28, 2017, after he had five kickoff returns for 141 yards against Ole Miss.

Ralston was San Jose State's coach from 1993-96, and he served as a special assistant to the athletic director during Brennan's tenure as a Spartans' assistant coach from 2005-10.

"A lot of us around here are sad about the passing of Coach John Ralston," Brennan said. "He was such an amazing human being and obviously a tremendous football coach.

"My first tour of duty at San Jose State, he was in this building with us every day. He had this incredible way of grabbing all the young coaches like me and saying, 'Hey, come in here, let me talk to you for a minute.' He would just drop some nugget of wisdom that was really special."

Ralston coached Stanford to a 34-28 victory over Arkansas in Little Rock in the 1970 season opener, when the Razorbacks were ranked No. 4 and the Cardinal were ranked No. 10.

[Video not showing up above? Click here to watch » https://www.youtube.com/watch?v=izEryfs_BjM]

Starkel completed 20 of 35 passes for 305 yards with 3 touchdowns and no interceptions. Clary had numerous key blocks, including on all three of the Razorbacks' touchdown runs.

Harris had a game-high 12 tackles, including one for lost yardage.

Morgan notched 4 tackles, including an 8-yard sack, and was active on special teams throughout the game. Limpert went 2 of 2 on field goals, 7 of 7 on extra points and had 5 touchbacks on 10 kickoffs.

Colorado State Coach Mike Bobo ruled out quarterback Collin Hill for this week's home game against Toledo, though the Rams are still awaiting results of an MRI on his left knee.

Hill, who has undergone two ACL repairs in the same knee, was hurt again Saturday when Arkansas safety Joe Foucha tripped over a pile and rammed Hill's planted left leg with his left shoulder.

"He's going to be out this week. There's swelling in his knee," Bobo said at his Monday news conference.

[Video not showing up above? Click here to watch » https://www.youtube.com/watch?v=oU_gab3CFCM]

The Razorbacks will take on Texas A&M at 11 a.m. on Sept. 28, the SEC office announced Monday. The game will be broadcast on ESPN. The Ole Miss at Alabama game that day was chosen by CBS for the 2:30 p.m. window.

The Hogs are the designated home team for the game against the Aggies, which will be their sixth in a row at AT&T Stadium in Arlington, Texas.