Arkansas is Central for Spartans' travel 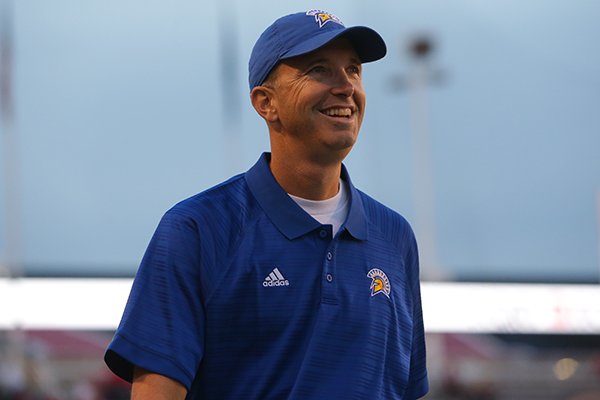 San Jose State coach Brent Brennan is shown prior to a game against Utah on Saturday, Sept. 16, 2017, in Salt Lake City.

The Spartans will travel more than 16,000 miles, including trips to West Point, N.Y., to play Army and Honolulu to play Hawaii.

"I think it's just line up and play," San Jose State Coach Brent Brennan said. "What other choice do I have? I don't get to say, 'Hey, I don't want to play this game in New York.'

"Five times zones, two time zones, it doesn't matter to me. I don't think it matters to our team. For us, it's like, 'Hey, let's go.' We're building a program here, and so every opportunity to play for us matters."

San Jose State (1-1) will make its lone stop in the Central time zone when it plays the University of Arkansas (2-1) at 6:30 p.m. Saturday in Reynolds Razorback Stadium.

The Spartans, 0-6 against SEC teams all-time, are playing Arkansas for the first time. Their most recent game against an SEC team was a 35-21 loss at Auburn in 2015.

"It's a great challenge for us going on the road to an SEC school," Brennan said. "It's a long way from home, and you get all the things that come with that. You get a different kind of a fan base and a great crowd. You're going to get some humidity.

"Everybody has a ton of respect for that conference and obviously what they've done. The kids that are in our program now, they've seen a ton of success come out of that conference on a national stage.

"It's going to be a great venue, and we're playing a great opponent in Arkansas. These are the moments you kind of dream of growing up, and I think we'll play our best football."

The Spartans were off last week after playing their first two games at home with a 35-18 victory over North Colorado and 34-16 loss to Tulsa.

"I think this is the earliest bye that I've been a part of as a coach," Brennan said. "But I still think there's value in it for us. It gives us a chance to assess what we did right and wrong over the first two weeks. It gives us a chance in all three phases of football to look at what we're doing schematically and how that matches up with what we want to do.

"It also gives us a chance to get a little bit of a jump-start on recruiting."

San Jose State senior starting quarterback Josh Love left the Tulsa game in the fourth quarter with an undisclosed injury, but Brennan said he'll be ready to play against Arkansas.

"Nick came in when Josh went down and did some good stuff," Brennan said. "But Josh is our starter, and there's no question or confusion about that."

"We felt like he made a huge jump between his second year and last season, and then I feel like he's made another nice jump this year. Obviously, we're only two games in, but that's what it looks l like to me in terms of the decision-making process and where he's going with the football.

"Nick didn't get here very long ago, so he's figuring it out as he plays. I thought he did some great things throwing the ball against Tulsa. Using his legs is obviously something he does well."

Brennan said Love and Nash complement each other with their skill sets.

"I think it gives us a little bit of a 1-2 punch that can keep people on their toes," he said. "Not being sure exactly what they're going to see series to series in the football game."

Spartans senior linebacker Ethan Aguayo, another former walk-on, is averaging 17.0 tackles per game to lead the nation. He had 20 tackles against Northern Colorado and 14 against Tulsa.

"Just a really hard worker, does everything right, and spends a lot of time watching film and preparing for the opponent," Brennan said. "He's just a great kid, and I think that's why you see him being in the right place and being able to finish some of those tackles."

Mike MacIntyre, who is Ole Miss' defensive coordinator, was San Jose State's head coach in 2012 when he led the Spartans to an 11-2 record and landed the Colorado job.

"I think the biggest thing when you're going through a tough season is keeping your team together and continuing to keep focused on the process," said Brennan, who played receiver at UCLA and was an assistant at San Jose State and Oregon State. "The process of improvement, which is hard to do.

"I think young people nowadays have to deal with a lot more outside factors that are extremely critical of them, and in our quick-fix society everybody wants it yesterday. But football doesn't work that way. Football is a game of process and it's a game of development."