Clary gets top mark at center 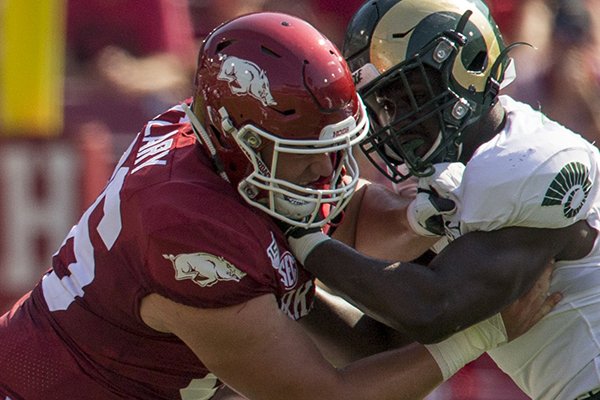 FAYETTEVILLE -- University of Arkansas junior center Ty Clary had the best game of his career in Saturday's 55-34 victory over Colorado State.

The 6-4, 285-pounder had key blocks at the point of attack on rushing touchdowns by Rakeem Boyd and made the Pro Football Focus national offense of the week unit. He was the only SEC player on the offense.

Pro Football Focus wrote, "Clary led the nation's centers with his run-block grade while not allowing a QB pressure."

Clary was asked about being selected to the national team.

[Video not showing up above? Click here to watch » https://www.youtube.com/watch?v=C2lryfgmJgI]

"That's nice," Clary said. "Sometimes they don't always give you very much love. So when you do get it, it's definitely nice."

Coach Chad Morris had high praise for Clary after the game.

"I think Ty Clary is improved tremendously," Morris said. "His leadership ... in the huddle before going out or fixing to make our play call, he's in complete control. That's a credit to him."

Among many solid plays by Clary was his work on Rakeem Boyd's 59-yard touchdown run in the first quarter. Clary fired off and helped right guard Ricky Stromberg put a defensive tackle off balance, then took out linebacker Cam'Ron Coleman in the hole, allowing Boyd to break through untouched to the second level.

[Video not showing up above? Click here to watch » https://www.youtube.com/watch?v=nwIUZTnh068]

Defensive end Jamario Bell returned to practice Tuesday and looked to be operating at full speed in individual drills early in the workout while wearing a brace on his left knee.

Linebacker Hayden Henry (shoulder) did not participate in the open part of the practice, and cornerback Montaric Brown (leg) was dressed but did not engage in team drills.

[Video not showing up above? Click here to watch » https://www.youtube.com/watch?v=QiIhbxNBzQk]

The first defensive unit featured De'Jon Harris at middle linebacker and D'Vone McClure on the weak side. Jonathan Marshall took first-team reps at tackle for McTelvin Agim, and LaDarrius Bishop was working at first-team cornerback with Jarques McClellion in place of Brown.

The linebackers with the second group were Grant Morgan in the middle and Andrew Parker on the weak side.

Myron Cunningham worked at first-team left offensive tackle in place of Colton Jackson, who gets time off in practice during the week after suffering a foot injury in training camp.

Arkansas and San Jose State are among six colleges that have two graduates with Super Bowl wins as head coaches.

[Video not showing up above? Click here to watch » https://www.youtube.com/watch?v=wReF-tUIH_M]

Arkansas is the only team from a Power 5 conference in that club. The former Razorbacks are Jimmy Johnson and Barry Switzer with the Dallas Cowboys under owner Jerry Jones, another former Arkansas player.

The former Spartans are Bill Walsh with the San Francisco 49ers and Dick Vermeil with the St. Louis Rams.

Johnson and Switzer were Arkansas assistant coaches and players under Frank Broyles. Carroll was an Arkansas graduate assistant for coach Lou Holtz.

"It's what we've got to do. We're not going to make excuses. It's what I get paid for, to get the next man ready to go."

Nick Starkel went 2 for 4 in the opening team period against the top defense. Starkel completed both of his passes to Treylon Burks. Safety Kamren Curl tipped his first throw for an incompletion, and cornerback Jarques McClellion broke up his slant for De'Vion Warren.

Ben Hicks also went 2 for 4 during the open team period, but he was almost 4 for 4. Walk-on Karch Gardiner made a good catch on his first throw, and Tyson Morris caught a screen pass. Tight end Blake Kern dropped Hicks' third pass, then cornerback Britto Tutt got a hand in to break up a slant for T.Q. Jackson, who had his hands on it.

"The town was pretty pumped up about that," Bishop said.

Ashdown and Razorback fans were both excited by Bishop's 25-yard fumble return for a touchdown.

"After that touchdown celebration, everybody was blowing my phone up saying, 'So proud of you,' " Bishop said. "It really lifted me up."

Brown recovered a fumble earlier in the game, so both Arkansas takeaways were posted by the Ashdown duo.

The Razorbacks are one of only seven FBS teams with two defensive touchdowns through three games.

The Razorbacks have had six fumble return touchdowns since their last pick-six, on Santos Ramirez's 24-yard interception return for a touchdown in a 31-10 victory over No. 11 Florida on Nov. 5, 2016.

Arkansas is tied for eighth in the nation, and tied for second in the SEC, with four fumbles recovered. Mississippi State has recovered seven fumbles, while Alabama is tied with Arkansas.

After Connor Limpert struggled at Ole Miss -- missing a 43-yard field goal and having a 36-yarder go over the crossbar after it hit the right upright -- he blasted a 54-yarder against Colorado State.

"It's all about trust," Limpert said about his relationship with Coach Chad Morris. "He has always had faith in me no matter what, so I believe in him and he believes in me."

The 54-yard field goal matched the second longest of his career. Last season, he hit a 55-yarder against Vanderbilt and 54-yarder against North Texas.

"Right after it came off my foot I knew it was going to be good," Limpert said. "You can just feel it at that point."

Quarterback Nick Starkel and tailback Rakeem Boyd both received honorable mentions for the weekly Earl Campbell Tyler Rose national player of the week award. The award is given weekly by officials in Tyler, Texas, to a player who was born in Texas or played high school or college football in Texas.

Boyd, a native of Stratford, Texas, rushed for a career-high 122 yards and two touchdowns in the Hogs' victory over Colorado State last week. Starkel, from Argyle, Texas, completed 20 of 35 passes for 305 yards and 3 touchdowns.

Defensive end Gabe Richardson and center Ty Clary will join Coach Chad Morris on his radio show tonight. On the Air with Chad Morris is on from 7-8 p.m. live from the Catfish Hole Restaurant in Fayetteville.

Colorado State Coach Mike Bobo announced Tuesday that quarterback Collin Hill suffered a torn anterior cruciate ligament in his left knee in the Rams' 55-34 loss at Arkansas on Saturday. He is out for the season.

It is the third torn ligament in the left knee for Hill, a 6-5 junior, who also suffered the injury in 2016 against Utah State and in 2018 while playing basketball.

Hill stayed in the game Saturday for two more plays after Arkansas safety Joe Foucha tripped over a pile and landed on his planted left leg.