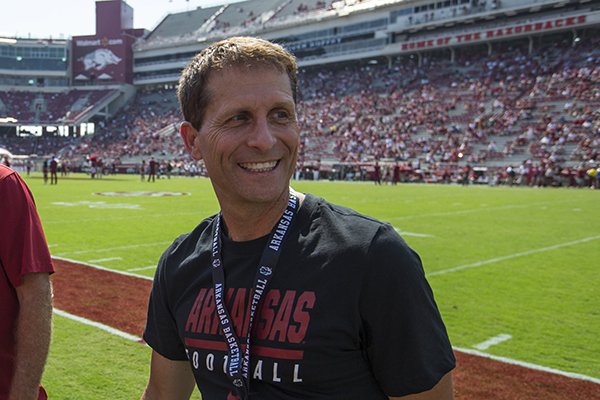 LITTLE ROCK — Football penciled in for Arkansas’ open dates and confident the Nick Starkel-led Razorbacks can handle San Jose State, the window is now for review of the SEC basketball schedule that appears kind to Eric Musselman’s first Razorback team.

The premise that professional oddsmakers are adept at identifying deserved betting favorites validates introduction of their opinion that Kentucky is the team to beat in the SEC. The Wildcats are 3-1, followed by Florida at 9-2 and Auburn at 7-1.

Arkansas is one of the five other conference teams that play each of those three only once, and both Kentucky and Auburn are at Bud Walton Arena. Missouri, South Carolina and Texas A&M play two of the three at home, while Mississippi State is at Florida and Kentucky.

In addition to the single matchups with the teams believed to be the league’s best, Arkansas has five games against the three teams considered the SEC’s worst at 33-1 by BetOnLine — a home and home with both Missouri and Texas A&M and Vanderbilt at Walton.

The Razorbacks’ odds are 25-1, same as South Carolina, but the Gamecocks have only four games against the three longshots and play all three favorites in their first five SEC games.

Not sold on the supposed home-field advantage in football, basketball is different. Whether it is knowing precisely the oomph needed for a 3-pointer from the hog’s snout in Fayetteville or the curled-up end of the distinctive A at Alabama, or feeling comfortable with the background, or the proximity of supportive fans, teams shoot better at home.

Among the top 15 shooting teams, only Georgia Southern and Montana were better on the road than in the friendly confines. Gonzaga was the national leader at 52.6 percent, including 54 percent at home and 51.3 percent on the road.

Arkansas has five players on campus who were not available last year, but only two are eligible this year and neither is likely to have the impact of newcomers at Kentucky, Florida and Auburn whose recruiting classes are ranked 2, 8 and 20 in a sport where the transition from high school is far easier than in football.

Winning consistently with newcomers is a given at Kentucky and a reminder that addition of a couple of extremely talented players is enough for immediate success.

According to 247Sports Composite, Kentucky’s recruiting class is second to Memphis with five-star players ranked 10, 11 and 24 among the players in the 2019 class.

Florida barely averaged 68 points per game last year, less than 280 other teams, but the Gators ‘ five-star athletes are ranked No. 12 and No. 26 in the class. At guard, newcomer Tre Mann will join sophomore Andrew Nembhard, the only player to start every Florida game last season.

If any of the five-star players are still in school after the NBA draft, their names will be noted.

The accomplishments of Musselman, and first-year coaches at Alabama, Texas A&M and Vanderbilt will be measured against those of SEC coaches hired in recent years, starting with Bruce Pearl who guided Auburn to its first-ever Final Four in his fifth season and tied for first in the SEC the previous year.

For anybody who cares, the week of Oct. 5 is tentatively designated for a rehash of Arkansas vs. Texas A&M and a look ahead at four consecutive SEC games and Nov. 16 should be devoted to the chances of the Razorbacks winning one of the last two to earn a bowl bid or to avoid a second consecutive 0-8 SEC record.