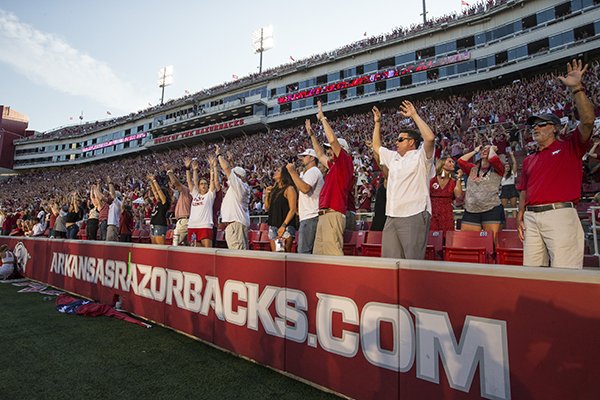 The Donald W. Reynolds Razorback Stadium crowd is shown during a game between Arkansas and Colorado State on Saturday, Sept. 14, 2019, in Fayetteville.

A longtime friend, Stephen Caldwell, wrote to make a few suggestions on how the University of Arkansas could make the football game experience better for ticket buyers.

Understand, sagging attendance is a national concern as alternative options to watch a game emerge.

With every game on TV or the internet, schools are faced with a generation or two that would rather not sit in the sun, which hampers the use of their cellphones.

Alabama’s president was whining last week that an 11 a.m. game was going to hurt the Crimson Tide’s attendance.

Alabama is still an official sellout, but when a fan stays home instead of watching the Tide beat the heck out of a directional school, expensive food or drinks are not purchased.

Caldwell’s first suggestion makes total sense: cut a seat or two out of each row and add the extra room to the other seats so people can actually fit into their allotted space without sharing deodorant with their neighbors.

If memory serves, long ago when War Memorial Stadium in Little Rock wanted to increase its seating, someone made the decision to make the seats smaller to add more seats.

The seats at War Memorial are way too small, and the leg room was designed for an average person in the 1940s and 1950s who was shorter than they are today.

Reynolds Razorback Stadium’s seats need a couple of more inches, too. It would reduce capacity by a couple of thousand, but it would make a sold-out crowd much more comfortable.

Of course, everyone would like reduced concession prices. Paying $6 for a bag of sugar (cotton candy) is outrageous, but that likely isn’t going to happen because the UA puts concessions out for bid rather than run them in-house.

That started years ago after an employee took hundreds of thousands of dollars.

It never sat right that the employee would roll wheelbarrows full of nickels, dimes and quarters into a bank every Monday and have the money converted into big bills.

Apparently, this went on for many Mondays and days after basketball games. The person took more than $700,000.

For some reason, turning all that change into folding money was never a red flag at the bank.

Anyway, the person was caught and the decision was made to hire a food contractor and take a percentage of the gross.

The UA has input on prices, but the contractor that is hired by IMG is out to make a profit, so don’t expect much change in that area.

Caldwell’s final suggestion was good for the fans and terrible for the media: In September, don’t have any games start before 6 p.m.

No doubt it was hot Saturday. About half of the fans on the east side — where you stare into the sun and there is no shade — left at halftime, and it had less to do with the game than the unbearable heat.

Of course, schools no longer dictate kickoff times and haven’t since they sold their souls to TV.

If Alabama can’t change an 11 a.m. kick, then no one can set a kickoff time but TV. And the Crimson Tide probably play fewer early games than any team in the SEC.

The morning games are for teams who aren’t winning and won’t draw big ratings.

That’s why Arkansas-Texas A&M is kicking off at 11 a.m. TV doesn’t believe the Razorbacks have a chance against a team with a real defense.

Let me remind my friend about something he has forgotten, although he grew up in a newspaper family and spent several years for this paper as a sportswriter: Night games make for tough deadlines.

Other than that, great ideas.