Morris, Hogs have to pick moments to put hammer down 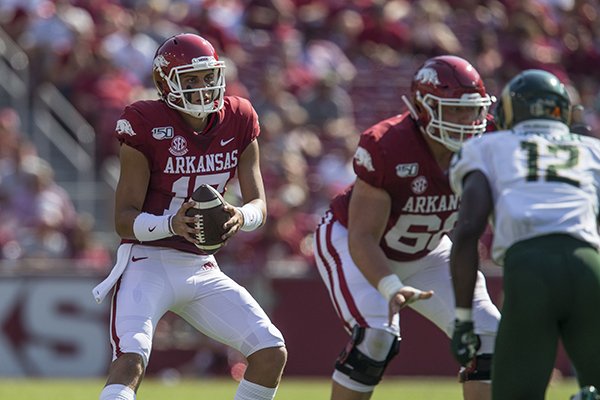 Arkansas quarterback Nick Starkel takes a snap during a game against Colorado State on Saturday, Sept. 14, 2019, in Fayetteville.

FAYETTEVILLE -- Sloganeering new coaches tend to buzz in buzzing buzzwords they later wish they had buzzed off.

"Uncommon," was Bret Bielema's buzzword upon his Arkansas arrival from Wisconsin.

Alas, as defeat became all too common in his 4-10 record from the final two games of 2016 through a 4-8 overall/1-7 in the SEC 2017, Bielema met the common firing fate of losing SEC coaches.

On to Arkansas came Chad Morris. He buzzed in rallying the reeling Razorbacks faithful promising a hurry-up no-huddle offense that would "stay in the left lane and hammer down."

As a 2018 2-10 overall/0-8 SEC season ensued it became apparent armadillos stood a better left lane freeway chance than the Razorbacks he inherited.

Morris wisely disappeared the rhetoric. Logic dictated not struggling uptempo three and out all the faster and overloading his already beleaguered defense.

Though always asserting the uptempo offense he coordinated at Clemson and head coached at SMU is an eventual Arkansas goal, Morris silenced the slogans in 2019. Better stressing fundamental improvement than an offense trying to sprint before it could toddle.

However, upon inserting graduate transfer quarterback Nick Starkel starting the second half of the 31-17 SEC loss Sept. 7 at Ole Miss and during last Saturday's 55-34 entirely Starkel quarterbacked victory over Colorado State in Fayetteville, Arkansas' offense periodically operated at an uptempo pace.

It's not mere coincidence the pace picked up with Starkel, the first quarterback in Morris' Arkansas year plus three games that he and the Razorbacks seem to have developed a mutual mesh.

However, Arkansas trailed 10-3 at half to Ole Miss with Ben Hicks quarterbacking and still lost 31-17 even with Starkel's second half "spark," the Hogs lauded postgame in Oxford.

So Morris will seek grooves to hammer down rather than ceaselessly hammering what's likely to nail his Hogs.

"We want to play fast, and we're going to continue to play fast," Morris said Monday. "When you're able to be efficient on first down it allows you to play a lot faster and more in sync. But you don't want to play fast and go three and out, either. That's not very good for your defense."