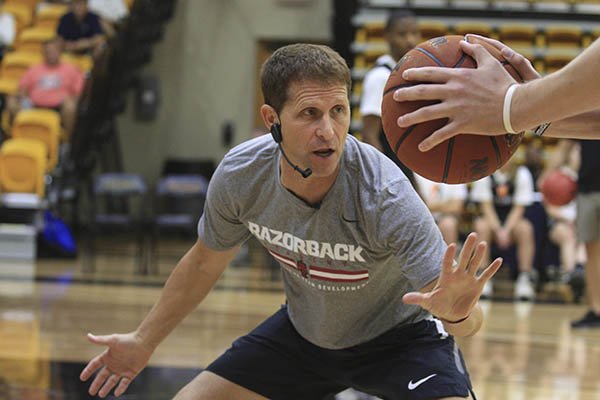 CONWAY -- Eric Musselman may be new to Arkansas, but when it comes to building relationships he is an old hand.

The University of Arkansas men's basketball coach made it a point that he wants a strong connection with the state's high school coaches while speaking to the Arkansas Basketball Coaches Association on Tuesday afternoon at Hendrix College.

"I think anywhere you coach you want to have a great relationship with the high school coaches in that state," said Musselman, who was named the Razorbacks head coach on April 7. "It's important to have a rapport with everybody whether they have a player that particular year or not. Our philosophy has always been to open our doors for any coach that wants to come to a practice."

Musselman, 54, spent four years as the head coach of the Nevada Wolf Pack before being named to replace Mike Anderson at Arkansas. He compiled a 110-34 record, won three Mountain West Conference championships and reached the NCAA Sweet 16 in 2018 while at Nevada. His college coaching resume also includes stops at Arizona State and LSU as an assistant coach or associate head coach.

Musselman said his office has sent out letters informing the high school coaches what days and times the Razorbacks would practice and that "30 to 40 coaches" already have taken advantage of those invitations.

"I think they love the game," Musselman said. "They're thirsty to pick up things. There have been days when we've had as many as six coaches come to our practices, both men's and women's coaches."

The eighth annual clinic featured five speakers, including Bill Self of Kansas.

Issac McBride, the All-Arkansas Preps Boys Basketball Player of the Year for 2019, signed with the Jayhawks in the fall. The 6-1 guard led Baptist Prep to three state championships in his four seasons with the Eagles.

"He's adjusting well," Self said of McBride. "There's a learning curve, as there is with all freshmen. He's obviously been through it, but considering we really haven't started practicing and have gone through just limited stuff, we're all real pleased with him. He tries really hard, he's competitive, and when he gets on a roll he can score with the best of them."

Musselman said his team "has holes," but he is pleased with the excitement his players have shown.

"We have a lack of size," Musselman said. "Rebounding is a concern. We can't turn the ball over. We value the basketball from an offensive standpoint, but as far as buying in and effort and energy, we couldn't ask for anything more from what our guys have given us thus far."