SEC building some of the top defenses in college football

By: Gary B. Graves, The Associated Press
Published: Wednesday, September 18, 2019 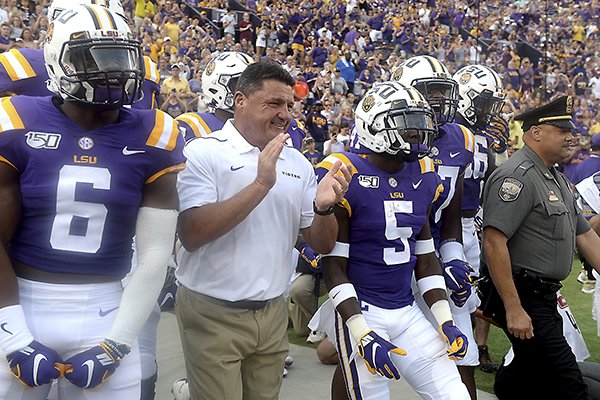 While defenses are still a work in progress around the Southeastern Conference, they still rank as some of the best in college football.

Florida leads the nation with 16 sacks, including 10 in the opener against rival Miami. Missouri, Tennessee and Georgia combined to shut out overmatched opponents 150-0 last weekend, helpful tuneups toward taking on schools their own size this week.

The Gators rank 33rd at 300.7 yards. Not bad considering they have played without cornerback CJ Henderson and lost defensive end Jabari Zuniga, both with ankle injuries.

"We knew what we wanted to accomplish coming into the year," linebacker Jonathan Greenard said, crediting defensive line coach David Turner. "We wanted to establish ourselves as the No. 1 defensive line in the SEC. Once we understood that and the coaches understood what we trying to do as well, that's how he coaches us. He coaches really hard and emphasizes the small details."

It's also working at Missouri, which ranks fourth nationally in FBS total defense (218 yards allowed per game) to lead a trio of SEC teams in the top 20 nationally — Georgia is tied for ninth and Texas A&M is 18th. Five more are in the top 40.

The Tigers' early standing might be surprising considering they ranked 10th in the league last season, though not as much as Alabama rounding out that impressive group at No. 40. Then again, the second-ranked Crimson Tide are grooming new personnel at some positions following a larger-than-usual exodus of talent to the NFL along with injuries.

The bar still remains high in Tuscaloosa, especially since they're trying to bounce back from their championship-game humbling by Clemson.

"It's always going to be the same," Alabama defensive end Raekwon Davis said of the expectations. "We play to a standard. We just have to do it."

SEC defenses seem to be getting it done differently than in previous years.

Alabama (3-0, 1-0) hasn't had its typically dominant defense, allowing 308.3 yards per contest. That hasn't mattered much since the Tua Tagovailoa-led offense is still putting up huge numbers.

Defensive end LaBryan Ray has joined linebackers Dylan Moses and Joshua McMillon among starting defenders now out indefinitely, leaving the Tide with possibly four freshman starters on defense. The upside is they've beaten South Carolina in SEC play along with ACC member Duke, and the youngsters get a chance for seasoning in Saturday's nonconference meeting against Southern Mississippi.

That matchup should create an opportunity for the statistics to be skewed somewhat, a common occurrence against lower-tier schools that adds a caveat to reading too much into many teams' performances. On the other hand, those so-called cupcakes allow teams to break in new players and schemes ahead of the grueling conference schedule, which this week features No. 8 Auburn (which ranks 31st at 292 yards allowed) at No. 17 A&M among five matchups.

The Tigers' defense begins with one of the league's top front lines, led by Derrick Brown and Marlon Davidson. Davidson is off to a fast start with 4.5 tackles for loss and 2.5 sacks.

A lot of attention this week will be focused on the nonconference showdown between No. 7 Notre Dame and third-ranked Georgia (3-0), which boasts the nation's fifth-best run defense at 60.7 yards allowed per contest. The Bulldogs' pass rush is also pretty stout with 12 sacks to tie for ninth nationally. Coach Kirby Smart credits an energetic outside linebacking corps including Azeez Ojulari and Nolan Smith.

"It's just the dynamic in that room," Smart said. "They get along so well. They compete really hard, and they're playing at a high level. They're producing more sacks than we've had in a long time."

Ninth-ranked Florida (3-0) made a statement for its defense with double-digit sacks against Miami (Florida). The blitz-happy Gators added five more against UT Martin and only an early sack against Kentucky, but they shut down the Wildcats in the fourth quarter to spark a 29-21 comeback victory.

No. 4 LSU emerged from its victory at Texas with injuries that led to several players not playing against Northwestern State. The Tigers allowed two touchdowns as a result to create other concerns, though coach Ed Orgeron sounded optimistic about improvement.

"We've got to get better, and I know we will," the coach said. "We've got to get some guys healthy. We've got to stop making some mistakes that we're making. The pressure I'm feeling is to get the defense up to speed with the offense so we can get to where we want to go."

That seems to be high on everyone's to-do list in the SEC.