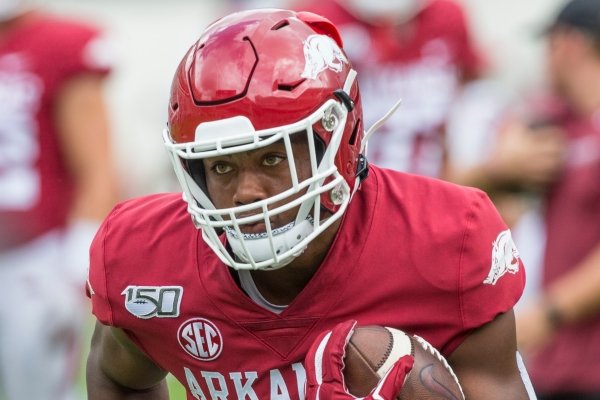 Chad Morris spoke for about 6-7 minutes prior to Wednesday’s workout. Here are a few notes from the pre-workout media session and 20-minute viewing period:

• Morris opened his comments today by stating that the energy in the building has been very high this week coming off the Colorado State win. Players are working very hard and are focused on improving a little bit each day. That is the team’s only focus right now, he said.

• Asked about his excitement to play a night game in Razorback Stadium on Saturday, Morris said he believes the crowd will be lively and energetic. Coaches and players love being in those atmospheres, he added. San Jose State will be Arkansas’ first night game in Fayetteville since LSU last November.

• On the injury front, sophomore linebacker Bumper Pool practiced for the second consecutive day. He wore a green no-contact jersey on Tuesday, but was in a standard white defensive jersey on Wednesday. Morris said he expects Pool to “be OK” for Saturday’s game. Linebacker Hayden Henry (shoulder) was doubtful to practice today, Morris stated, but he was present and in uniform minutes later. Henry will be re-evaluated again on Thursday.

• Freshman receiver Trey Knox, who wore green on Tuesday, was back in standard red today. He did not go through the thud work early in practice yesterday. The shot to the hip he took late in the Ole Miss game in Week 2 is probably still lingering a bit. Treylon Burks, who we saw walking into Walker Pavilion as the open portion of practice ended Tuesday, was not present at practice today. His status is unknown. Redshirt sophomore receiver Koilan Jackson was also absent.

• Ty Clary is the team’s offensive captain this week. Clary is coming off the best game of his Arkansas career, according to Morris and offensive coordinator Joe Craddock. The Fayetteville native was named to the Pro Football Focus national team of the week a couple of days ago following his play against Colorado State. The team’s permanent captains are McTelvin Agim, TJ Smith and De’Jon Harris.

• On Arkansas’ defensive ends, Morris said Jamario Bell has done well in practice this week. He was back on the field Tuesday wearing a brace on his left knee. He added that Bell was a bit fatigued following yesterday’s workout, but that is to be expected after missing time. He looks to be moving fine from what we’ve been privy to.

• Mataio Soli, who has worn a bulky club on his right hand since fracturing a bone late in the win against Portland State, will have to play with it for most of the season, Morris said. John Chavis commended the freshman on Monday, saying he doesn’t complain about the wrap, which prohibits him a bit from getting off as many blocks as he’d like. He just goes about his business, Chavis said.

Offensive lineman Colton Jackson was not present for today’s workout, making it two days in a row. Coaches could just be allowing him to rest the foot that has bothered him since camp. Starting cornerback Montaric Brown, who Morris said Monday is dealing with a “muscle strain,” was at practice in a white jersey and appeared to be full go.

Chase Harrell, who wore a green jersey during the open portion of practice Tuesday, upgraded to a red jersey Wednesday. He has been dealing with a minor shoulder injury sustained in the season opener against Portland State. Harrell caught his first touchdown pass as a Razorback on Saturday vs. Colorado State.