What Chad Morris said on his weekly radio show 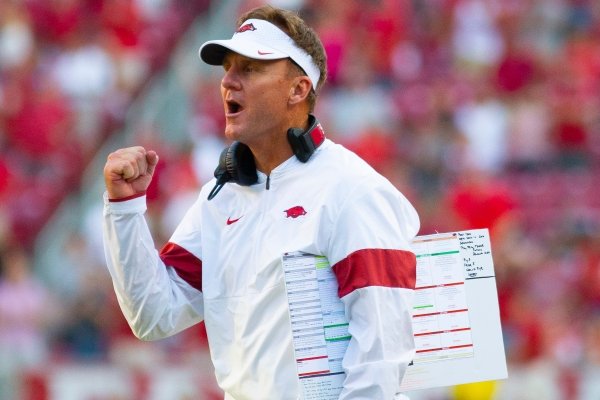 Arkansas will try for its first two-game winning streak of the Chad Morris coaching era on Saturday. All the while, the Hogs will also focus on the future.

“It’s a big weekend for recruiting,” Morris said Wednesday night on his weekly radio show, On the Air with Chad Morris.

“We are going to entertain about 350 when you count moms, dads and brothers. We want to give them a good environment.”

Winning is the best environment. The 2-1 Hogs play host to San Jose State at 6:30 p.m. on Saturday. They will try to win their second straight game, something they did not do in the first year under Morris at Arkansas.

“(A winning streak) builds on momentum from last week,” Morris said. “But it’s not so much that we won last week (in a 55-34 victory over Colorado State), but it’s how we captured the victory.”

The Hogs were tied at 34-34 entering the fourth quarter, but dominated with three unanswered touchdowns to down the Rams. Radio show host Bo Mattingly, subbing for Chuck Barrett, asked if it was a “defining moment” for the program.

“Year one, we put in the culture and we would not deviate from it. Year two, we now rely on a belief in the culture. It’s mental and physical. It really kicked in.”

Morris said the Hogs are facing some physical challenges this week. However, injured linebackers Bumper Pool and Hayden Henry both practiced on Wednesday. Both are probably still doubtful, but Morris was encouraged by the practice of both after they missed Sunday and Tuesday workouts.

Morris said back-up linebackers Grant Morgan and D’Vone McClure both are ready to step in if Pool and Henry can’t play. Those two have gotten the majority of practice time beside De’Jon Harris, the mainstay at inside linebacker.

“We’ve had an incredible week of practice,” said Morris, noting it matched a good week after the loss at Ole Miss.

“Last week we had our best week of practice,” he said. “It started in the locker room after Ole Miss.”

The only real problem this week has been “some illness” in the team, but all should be recovered by the weekend.

“We got punched in the mouth,” Richardson said. “But we responded. We were in better shape.”