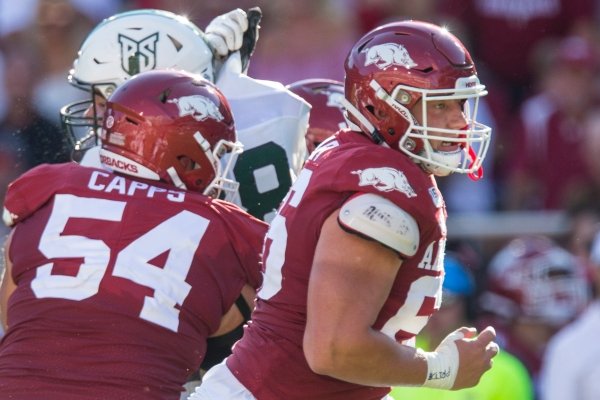 Folsom rushed into the Arkansas backfield on a blitz and pressured quarterback Nick Starkel as he let go of a third-down throw that found receiver Mike Woods for six yards to the Colorado State 24. The play resulted in a first down and sustained an impressive drive that ultimately resulted in freshman Trey Knox's first touchdown catch.

But junior center Ty Clary, a Fayetteville native who led his hometown Purple’Dogs to consecutive Class 7A state championships in his final two years of high school, was furious, and he voiced that frustration to starting right guard Myron Cunningham before the next snap.

Folsom was Cunningham’s assignment, and his momentary lapse allowed what could have been a free shot on Starkel, who went on to throw for 305 yards and three touchdowns in his first start with the Razorbacks. Clary’s quick tongue lashing was not lost on Arkansas’ coaches, who brought it to the media’s attention on Monday. They viewed it as a sign of growth.

“One of our guys kind of screwed up the pass protection and Ty went over there and jumped him pretty good,” offensive coordinator Joe Craddock said. “It’s starting to mean more to Ty. I think he’s really taking a leadership role and doing a really good job of bringing other guys along and being a communicator, letting everybody know the calls that we’re in and doing a really good job of picking it up.”

On Tuesday, Clary said he wouldn’t have chewed on one of his fellow linemen last season. He didn’t feel it was his place to do so as a sophomore. That was more in senior lineman Hjalte Froholdt’s wheelhouse.

“This year I feel (coaches) have given me a little more responsibility, and just with a little bit of age that if that stuff happens, you’ve got to nip it in the bud,” Clary added. “You can’t let it happen anymore. He came up to me later and said, ‘Hey, thank you. I needed that. Don’t let me get away with anything.’

“I definitely think this is the closest the O-line has been. We’re brothers. That helps a lot and I’m excited to see what we can do this year. I have high expectations, for sure.”

On the first play of Arkansas’ opening possession, Clary put a Rams defensive tackle on his backside as Starkel let loose a 38-yard ball to freshman receiver Treylon Burks on a corner route. It marked the beginning of what Razorbacks coaches labeled the best game of his college career.

Clary, on Monday, drew more praised as he was named to the Pro Football Focus national team of the week for his well-rounded performance against Colorado State. He held the highest run-blocking grade of all of the nation’s centers and did not allow a quarterback pressure in 38 pass-protection snaps.

The honor was gratifying, he said, but he does his best to not allow accolades to preoccupy his mind.

“Sometimes they don’t give you very much love, so when you do get it it’s definitely nice,” Clary said with a smile. “I feel like last game I was into the gameplan and I think I played aggressive and played without worry about my assignment or other alignment.”

Clary’s issues snapping the ball have been well-documented since his first start at center at Auburn in 2018. Questions seeking an update on his comfort level in that aspect of his job are commonplace in Clary’s visits to the interview room. He worked tirelessly, he said, on growing more consistent with his snaps this offseason.

“That’s been a big thing,” added Clary, who has the word 'PRIDE' written on the tape covering his right wrist and hand. “It’s all about the start of the play. The quarterback has got to get the ball, so I know if I’m confident I’m going to get him the ball and I’m going to get it to him accurately, then I can block better.

“Confidence has been a big difference,” Clary continued. “Just being in the system for another year, that makes a big difference. I think I had a good offseason, and I’ve got great teammates that really helped me out.”

Aside from fine-tuning his shotgun snap technique, Clary dedicated himself to the weight room and conditioning after last season, spearheading an increase in strength and flexibility, which is vital for an interior lineman. Simply, Arkansas coach Chad Morris said, he now has a greater understanding for how to take care of his body.

“This is not something that just happened during the last fall camp,” Morris added. “He continues to improve and be a leader in that offensive line room. It’s great to see that. I think he matured an extra year. He’s more comfortable with our system.

“He’s more comfortable with coach (Dustin) Fry and what we’re asking him to do. And I think overall his comfort level has allowed him to relax and play fast.”

When Arkansas’ staff first arrived on campus, Clary was a player it pointed to who would need to become a central figure not only on the offensive side of the ball, but in the locker room. One-quarter of the way into his junior year, he’s answered that call.

“I think Ty Clary is improved tremendously,” Morris said after the win over Colorado State, Arkansas’ second of the season. “His leadership, in the huddle before going out or fixing our play call, he’s in complete control. That’s a credit to him.”

True freshman Ricky Stromberg, projected to start at right guard against San Jose State after starting at left guard against Ole Miss and Colorado State, entered fall camp with his sights sets on just making the Razorbacks’ travel roster. But, thanks to what coaches describe as a mean streak and a bit of guidance from Clary, he has already become a key piece of Arkansas’ offensive line early in his career.

“I honestly just listen to him,” Stromberg said. “If I need something on the line, he tells me what to do. I kind of just follow in his footsteps, follow in his shadow, kind of. He’s kind of like a big brother to me, honestly.”