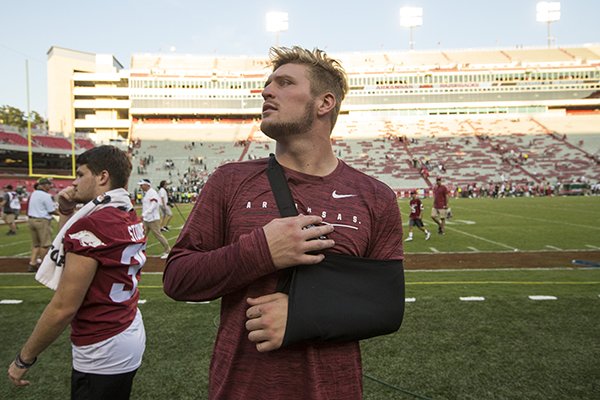 Arkansas linebacker Bumper Pool is shown following the Razorbacks' 55-34 victory over Colorado State on Saturday, Sept. 14, 2019, in Fayetteville. Pool was injured during the first half of the game.

Pool and Henry both have left shoulder issues, while Brown has a strained leg muscle. All three came out during Saturday's 55-34 victory over Colorado State and are questionable for Saturday's 6:30 p.m. game against San Jose State (1-1).

Pool and Henry did not engage in "thud" drills with their fellow linebackers on Wednesday. Pool suffered a strain near his left clavicle and came out of the game after the first play of the second quarter. That led to more playing time for Henry, who came out with a left shoulder injury after his big hit on running back Marvin Kinsey forced a fumble late in the game.

"Bumper worked out yesterday and will go again today," Coach Chad Morris said during his pre-practice meeting with reporters.

[Video not showing up above? Click here to watch » https://www.youtube.com/watch?v=M6_4ah2UaUY]

Brown did not go through team drills Tuesday, but he appeared to be moving and back-pedaling well during group work on Wednesday.

Redshirt freshman LaDarrius Bishop had a pass breakup and a 25-yard fumble return for a touchdown after subbing in for Brown on Saturday.

"I think [Bishop] came in and did a good job," Morris said. "He'll continue to provide some depth there for us. He'll continue to improve. He's just a young player that has got a big future ahead of him."

[Video not showing up above? Click here to watch » https://www.youtube.com/watch?v=3ourcTd0h_4]

Bishop said he's got to continue working on technique, such as on his breakup, when quarterback Patrick O'Brien's deep pass hit him in the back of the helmet.

"I just need to work on a few more things, technique wise and getting my head on a swivel on that ball," Bishop said.

Arkansas will play its first home night game against San Jose State with a 6:30 p.m. kickoff after the first two games at Reynolds Razorback Stadium against Portland State and Colorado State started at 3 p.m.

"We feel like the crowd will be really strong and into the game," Coach Chad Morris said. "A lot of energy in the stadium. As a coach, as a player, you always love those evening games.

"Everybody has a chance to tailgate and have a good time through the course of the day. Get in the stands that night and support your team."

Chad Morris said he expects defensive end Mataio Soli will have to wear a heavy wrap on his right hand most of the season.

Soli broke a bone in his right hand in the opener against Portland State and has worn the wrap while starting the last two games.

"He keeps playing hard for us," defensive coordinator John Chavis said. "Is it frustrating for him? Yeah. When you've got a big, ol' ball on your hand it's a little more difficult to get off blocks, but he's doing a good job.

"The good thing is he's not said a word about it. He just goes, and I'm excited about him. There's no doubt he's going to be an outstanding football player before it's all over."

The SEC Network broadcast team of Dave Neal and D.J. Shockley made reference a couple of times Saturday to Arkansas players calling linebacker Hayden Henry "The Animal," for his ferocious nature on hitting ball carriers.

Coach Chad Morris reiterated that notion this week when speaking of Henry, who is nursing a shoulder injury after slamming into Colorado State running back Marvin Kinsey and forcing a fumble that cornerback LaDarrius Bishop returned for a 25-yard, game-clinching touchdown.

"He plays with such a relentless pursuit to the ball," Morris said. "He's all over the field. He knows one speed and it's wide open. He has no fear of contact. This is a young man that he's a force.

"He loves the Hogs, he loves this game of football and he just wants to go play ball. That's what you love about a linebacker like him."

"It's just very, very sad for him and his team," Morris said. "After watching the play ... Joe was just sick about it too. Joe, with him being tripped and going down, it's just very unfortunate.

"This young man is a great talent. He's one of the better passers that we would see all year long. Very sad for this young man."

Freshman Trey Knox had a green (no-contact) jersey for parts of last week and this week after taking a shot to his right hip late in the Sept. 7 loss at Ole Miss.

"My hip was a little stiff, but I'm progressing, getting better every day, so I should be fine," Knox said.

Since that victory, San Jose State has lost twice each at Auburn and Minnesota and once each at Iowa State and Tulsa in the Central Time Zone.

San Jose State will play at its third different venue in Arkansas when it faces the Razorbacks on Saturday.

The Spartans have a 1-1 record in previous games in the state.

San Jose State lost 21-7 at Arkansas State in 1995 at what was formerly Indian Stadium and is now Centennial Bank Stadium in Jonesboro. The Spartans beat Arkansas State 33-14 on Aug. 31, 2002 in a season opener at War Memorial Stadium.

The Razorbacks remained in the top 15 in turnover margin after winning that statistical battle 2-1 against Colorado State.

Arkansas owns a plus 1.33 margin per game, which is tied for 15th in the country with five other teams. Alabama, at plus 2.33 per game, and Mississippi State (+1.67) rank higher in the SEC. The Crimson Tide is tied with three other teams behind FBS leader Notre Dame (+ 3.0), while the Bulldogs are tied for seventh.

Arkansas is 87th in team passing efficiency and 61st in pass efficiency defense.

"In my small interactions with him, he just seems like a really good guy," Brennan said of Morris. "He seems like he's about the players and doing the right thing by them. And he's in a great spot where he can build a program, and I know he's excited about doing that."

Morris coached at SMU for three seasons before taking the Arkansas job.

"My mother and father-in-law are SMU alums, and my wife grew up going to games there. Pony Express and all that good stuff," Brennan said. "That's a program we've always kept an eye on, so we watched Chad's progress over time there."

"A great ball coach," Morris said. "He'll have those guys ready to go."