Turn down the volume and call those Hogs 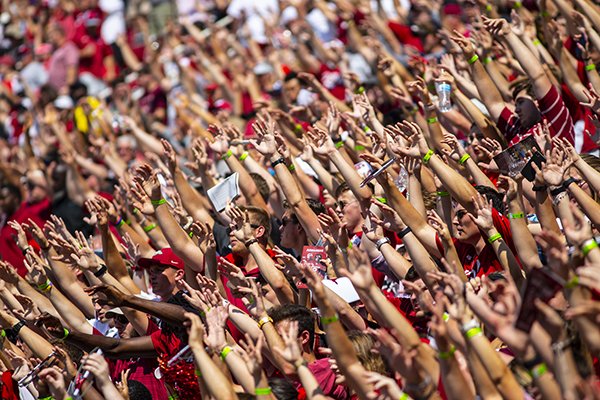 Several more people have sent emails with suggestions on how to make the University of Arkansas football game-day experience better.

Good news for the UA — and yes, officials there are paying attention because it was officially brought to my attention — is that it did not go over budget on the north end zone expansion, the area sometimes known as the Razorback Riviera.

There were strong rumors that the project would exceed the $160 million budget (for about 3,200 new seats, none for the students), but Hunter Yurachek was hired and the final cost, to this point, was $158 million.

Anyway, back to the game experience. Some suggestions worth considering are about the piped-in music, long TV timeouts and losing.

The piped-in music is very, very loud, and primarily for the students’ enjoyment.

The crowds — using that word loosely — are arriving later and later. Some, no doubt, want to miss the very, very loud music, which continues during the game.

Once last weekend, the music was playing while the official was trying to announce a penalty.

The suggestion was to let the band play more, and it’s a good band (my grandson Fisher enjoyed it more than the piped-in music).

Another thought is to get the fans involved with more Hog calls. It is a one-of-a-kind cheer that could never be used too much.

Cut out the babble by sportscasters and get back to the game. Those bleachers are hard.

As for the losing, well, there has been way too much of that since Bobby Petrino exited the place. Bret Bielema did go 8-5 once, but that’s still too many losses.

Arkansas has a historic loss — the 1969 Shootout with Texas (more on that later) — and doesn’t need anymore.

Tickets and concessions are expensive, and there are long lines for the stands and restrooms.

The seats are small — although you can pay extra for a stadium cushion that helps keep encroachers in their seats — the place is loud, and the team is losing.

Everything except the losing is fixable in a reasonable time.

The team winning more games cannot have an exact timetable, the talent had fallen off way too much.

The 1969 Shootout between Arkansas and Texas — attended by President Richard Nixon — was considered by many as the game of the century.

It was so big that ABC moved it to the last game of the regular season, and its gamble paid off when No. 1 faced No. 2.

Newspapers from coast to coast sent their reporters and columnists to cover the game.

Lifelong friendships between the Hogs and Horns resulted from that game.

It was a time of change in America, and one book captures it all: Beyond the Big Shootout: 50 Years of Football’s Life Lessons.

The author, Mark McDonald, will be the featured speaker Tuesday at noon at the Clinton School of Public Service. It is free, so pack a lunch.

McDonald will have some books for sale and will be available to sign them.

This is part of the Clinton School’s speaker series.

It should be a lively talk because McDonald devoted countless hours to writing the book.

McDonald is a former sportswriter for the Dallas Morning News and played college football at Texas-El Paso. His son is a former Longhorn football player.

The book captures not only the game but also the era in which it was played through dozens of interviews and hundreds of hours of visiting with the guys who played in that game.

A native of Texas, McDonald does a great job of staying neutral, and the book is about so much more than the final score.

It dwells deeply into how the game affected those who played it as well as those who viewed it.