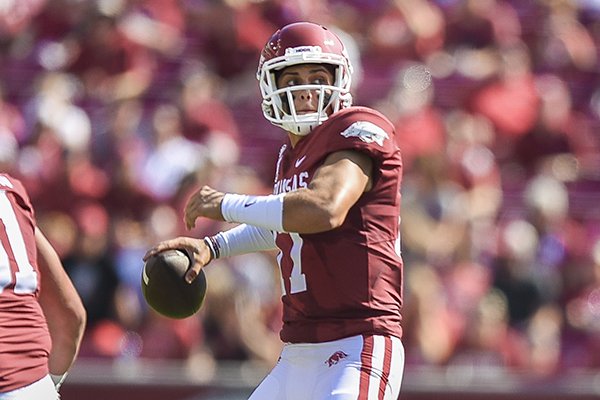 Arkansas quarterback Nick Starkel throws a pass during a game against Colorado State on Saturday, Sept. 14, 2019, in Fayetteville.

FAYETTEVILLE -- Did the Arkansas Razorbacks pop the clutch and stomp the gas in the passing lane Saturday?

The numbers from the University of Arkansas' 55-34 victory over Colorado State suggest the Hogs' offense got in its highest gear since Coach Chad Morris took over last season.

The Razorbacks produced big numbers on first down and third down, showed remarkable balance and lit up the scoreboard with 48 offensive points to improve to 2-1.

"It's the best we've executed offensively, without question," Morris said.

Arkansas, which hosts San Jose State on Saturday at 6:30 p.m., averaged 7.6 yards on first down and started the game with a bang on Nick Starkel's 38-yard pass to Treylon Burks. Starkel had four other first-down completions of 17 or more yards.

"I think we threw the ball well on first down and were able to push the ball down the field a little bit," offensive coordinator Joe Craddock said. "From the very start of the game, we hit the corner route to Treylon and kind of softened them up and in turn we got some running lanes inside."

The Razorbacks gained 520 yards, their top total in 15 games under Morris and Craddock. They converted 6 of 12 third-down plays, their highest percentage this season.

The first start for the junior Starkel clearly played a role in the improved offensive numbers. He passed for 305 yards and 3 touchdowns with no turnovers and one sack.

Starkel averaged 8.7 yards per pass attempt, tying his total for the year, which is tied for 32nd nationally.

"I love it," freshman receiver Trey Knox said of Starkel's willingness to throw to him and others with defenders nearby. "He's a medium-risk, high-reward type of guy, and I think that's what we need in this type of offense: Somebody to take chances, throw the ball downfield and give our playmakers chances."

Yet Starkel's play, which included 20-of-35 passing, tells only part of the story of the 520-yard performance.

A much-maligned offensive line got movement, protected well in the passing game and walled off defenders to create running lanes.

"With the offensive line, it is one of the better grades that they've graded out as a whole," Morris said. "And they continue to improve, which is good to see. They had one TFL [tackle for loss] and gave up one sack.

"Great first-down production. That's a credit to a lot of things, but it starts with our offensive line. I think our ability to throw the football helped our run game immensely. It allowed our running backs to see our running lanes a little clearer. I think it all worked hard in hand."

Junior center Ty Clary was named to the Pro Football Focus national team of the week for having the highest grade among all the nation's centers.

"This last game I was locked into the game plan, and I think I played aggressive and I played without worry of my assignment or my other O-linemen," Clary said. "I knew they were going to handle their jobs and that helped me handle mine."

Morris said he noted with pride that Clary adamantly corrected a fellow lineman for a missed assignment early in the game, a sign of his growing leadership.

"I definitely would have never done that last year," Clary said. "Just because I didn't feel it was my place. This year they've given me a little bit more responsibility. And just with a little bit of age, that if that stuff happens you just nip it in the bud and you can't let it happen anymore. He came to me and was, 'Thank you. I need that. Don't let me get away with anything.' "

Clary would not name the lineman he corrected.

Rakeem Boyd and Devwah Whaley combined to rush for 203 yards and three touchdowns. It was their best combined performance, topping the 176 rushing yards they posted last season against Ole Miss.

Tight ends Cheyenne O'Grady and Chase Harrell combined for two touchdowns, and position mate Grayson Gunter had his hands on another would-be touchdown pass that appeared to be screened by a defender.

The downfield passing game added a dimension that keeps defenses from packing the box to defend the run.

"Oh, it's definitely opened up," Knox said. "If you saw last week, we'd get safeties out of the box. You saw Rakeem have that long run because the safety was coming over the top to double me and bracket me. Going long just opens up the run game tremendously."

The freshman Burks (4 catches for 92 yards) and Knox (6 for 90) both came close to their first career 100-yard games. They combined for three catches for 49 yards on successive plays to trigger Whaley's go-ahead touchdown run early in the fourth quarter Saturday.

O'Grady turned a medium-depth out-and-up route into a tackle-breaking 62-yard touchdown on the Razorbacks' next possession as the offense racked up 140 yards in the final period.

"So it shows you what they're capable of in terms of how hard they play, and what I'm sure what Coach Morris and his staff are trying to instill in that program about finding ways to win, believing you can win the fourth quarter. Obviously, they did a nice job of that last week."