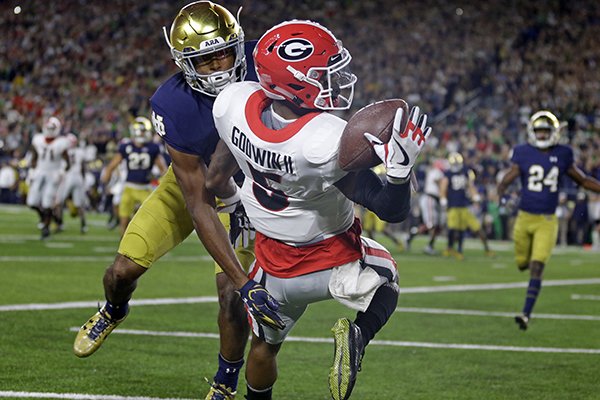 This is a little more interesting week in the Southeastern Conference with five conference games and Georgia hosting Notre Dame, while Ole Miss is home against No. 23 California.

Georgia is ranked No. 3 in the country, and the Fighting Irish are No. 7.

Last week was fairly predictable, going 10-1 in the picks to bring the season record to 28-9.

This week isn’t as easy, but here it is:

This isn’t necessarily a buy-a-win for the Razorbacks who are not deep enough to take anyone lightly. Still, the Hogs are favored by 21, but the defense fell to 72nd (out of 130) in total defense and are allowing an average of 379.3 yards per game. The Hogs’ offense seems to be getting into high gear and should move up from 60th in total offense. It’s the last tune-up before it gets real. Arkansas 35-21

The Salukis’ athletic director and former head coach Jerry Kill resigned Monday to take a position at Virginia Tech. That’s a distraction but nothing compared to what Red Wolves’ head coach Blake Anderson has been dealing with. His return to the the sidelines helped his team, but now he has to find the right quarterback. Have to say what Georgia did in memory of Wendy Anderson was amazing. Arkansas State 31-21

A rare 11 a.m. kick for the blue bloods of the SEC, but they could play this one at 6 a.m. on a golf course with Nick Saban taking a holiday ,and the Tide would win easily. Bama games are sellouts, but the crowds have been less than expected. The Tide’s receivers are worth going to see. Alabama 56-10

This is a huge game to see which team finishes third in the SEC West. There are two excellent defenses and one proven quarterback, the Aggies’ Kellen Mond. The Aggies are focused and won’t be looking ahead to the Hogs. Texas A&M 28-27

As the Gators search for a quarterback, the Vols’ search for a silver lining in a season that has been stormy. Beating Tennessee-Chattanooga didn’t help much. Florida 31-21

The Bulldogs have added seats for this showdown of undefeated teams. The Fighting Irish are coming off a 66-point performance against New Mexico but face the NCAA’s ninth-ranked defense. Someone is dropping out of the top 10 and maybe playoff contention. Georgia 24-21

The Bulldogs have suffered from suspended players, as they apparently try to get right with the NCAA. The Wildcats are still trying to prove last season started a new trend. Mississippi State 21-20

This is the Commodores’ chance to make some rain, unfortunately there is still a drought, and their odds go down as soon as the ball is kicked off. Joe Burrow will become a Heisman Trophy candidate if he keeps playing the way he has in the first three games, completing 75 of 90 passes (83.3%). LSU 42-14

The Bears are undefeated, barely. Their last two wins were by a total of seven points, 20-19 over a good Washington team and 23-17 against North Texas. Ole Miss is not consistent on offense, mostly because of the offensive line. In three games, the Rebels have outscored their opponents 81-61. California 27-24

Kelly Bryant is proving to be as good as billed when he transferred from Clemson. The Gamecocks are enduring some injuries. The Tigers are still trying to live down their season-opening loss to Wyoming. It’s a big game as both teams fight for position to be in a good bowl spot. Missouri 35-21