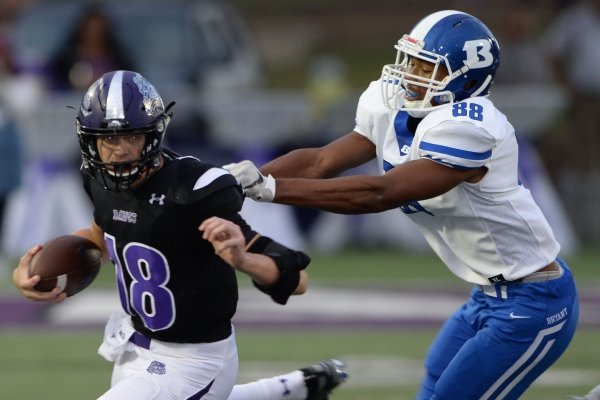 Fayetteville quarterback Hank Gibbs (18) looks for a receiver Friday, Sept. 20, 2019, as he is pressured by Bryant linebacker Catrell Wallace (88) during the first half of play at Harmon Stadium in Fayetteville. Visit nwadg.com/photos to see more photos from the game.

FAYETTEVILLE — It may have seemed like Bryant senior linebacker and Arkansas 2020 pledge Catrell Wallace (6-6, 215) actually began plays in the Fayetteville backfield Friday night.

He didn’t, but he sure spent a lot of time back there. Wallace finished with eight tackles, five quarterback knockdowns, two quarterback hurries and a pass breakup in the No. 1 Hornets’ 42-13 win over the Purple'Dogs.

“I feel like I’ve gotten way better reading my keys and being able to make more plays,” Wallace said. “Developing myself as a player, getting my speed and strength up, my knowledge of the game I feel has gotten a lot higher.”

Bryant coach Buck James, whose team moved to 3-0 on the year after going went 11-2 last season and winning the Class 7A state title, knows he has a special player in Wallace.

“He missed a few tackles and that’s uncharacteristic,” James said. “But he was physical. I thought he was very physical. He put pressure on the quarterback and hit him hard. He really changed the tempo of the game. They were looking to see where he was at.

“He’s like a knot. When he hits you it hurts. He’s still got a lot of room to improve, but he can run and does a lot of good stuff for our football team.”

Wallace showed off his speed during the game numerous times, including one play in which he pressured the quarterback around the 40 and ended up making a tackle inside the 5-yard line.

“It’s just an advantage,” Wallace said of his speed. “People really don’t look at me being a speed guy. On film I don’t look too fast. In the game I feel like the adrenaline gives me a bigger boost or something like that.”

It was the speed that James noticed first when Wallace was a sophomore.

“I talked to college coaches about it when he was a sophomore and junior,” James said. “We played him on kickoff team and he was the first one down the field. He’s fearless.

“I’m telling you now, when he gets to be a big, strong kid he’s going to be something to reckon with. He has got so much upside. I think he’s really raw right now, but his upside is tremendous. He can run and he’s agile. For a guy who is 6-6, 215-220 pounds in high school, he’s not going to do anything but get better as he gets bigger and stronger.”

Wallace committed to Arkansas on Sept. 1 and chose the Razorbacks over Ole Miss, Nebraska, Oklahoma State, Virginia and others.

He had previously stated he would take some official visits before making a decision, but changed his mind.

“I wanted to get out of the way,” Wallace said. “In case I get hurt I wanted something to fall back on. They said they wouldn’t pull my offer if I did. They are great coaches that just kept up with me. They talked to me every day, checked on me, my family and it felt just like I was home.”

Wallace had a big performance on Friday in front of Arkansas defensive ends coach Steve Caldwell, who was celebrating his birthday by watching one of his future players.

“He told me he was coming to the game,” Wallace said. “It made me feel warm inside to know he was watching. Got the win for him, too.”

Arkansas is off to a 2-1 start this season and is coming off a 55-34 win over Colorado State heading into tonight’s game with San Jose State.

“I’ve seen growth in the offense,” Wallace said. “They’re really coming together. They’ve got five new freshman starters. They’re just building a bond. I like what they are doing. I like the coaches and how they’re slowly progressing.”

“They are talking to me about playing a hybrid toward the boundary,” Wallace said. “Like third down and longs, I back into the pass or rush the passer, whatever they want.”

Bryant lost 24 seniors off last year’s championship team, but appears to be as good, if not better, than last year’s team.

“We’re just practicing harder,” Wallace said. “Practicing every day of the week. We’re in the weight room five days a week. Coach pushes us to be the best every day. We’re just doing what needs to be done.”

James likes what he sees in Wallace as a leader.

“The thing I like about him is he’s a good leader,” James said. “He does a good job in the locker room and practice fields. I think he makes the team better.”

Bryant kept many of it starters in late in a game that was played under the mercy rule and a running clock after the first series of the third quarter.

“Usually the coach would take us out around mid-third quarter, but the past year we’ve only won by a total of two or three points (against Fayetteville),” Wallace said. “He wanted to make a statement.”