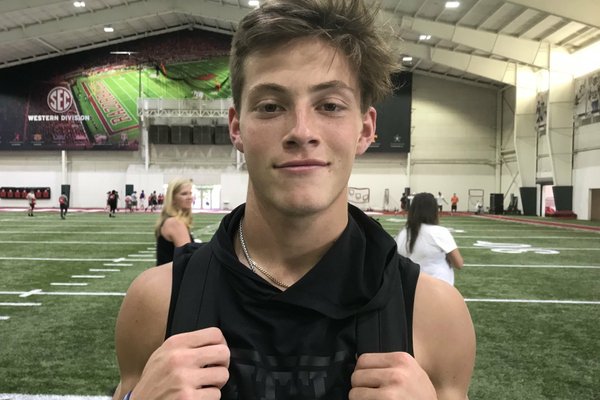 2020 WR Hayden Metcalf is joining his sister in Fayetteville after pledging to the Hogs.

Receiver Hayden Metcalf, who earned a preferred walkon offer from Arkansas during a June camp, has committed to the Hogs and will join his older sister Kendall in Fayetteville.

Kendall, who’s a junior at Arkansas, was overjoyed when she learned of his plans to be a Razorback.

“My sister was in tears when I told her I was committing,” Metcalf said. “She is so proud of me and everything I have accomplished. Every person she sees she tells them I’m her brother.”

Metcalf, 6-1, 170, 4.49 seconds in the 40-yard dash, of Prosper, Texas, picked the Hogs over an offer from Northern Colorado along with interest from Washington State, Holy Cross, Tulsa and Colorado State.

Metcalf, who had 34 receptions for 580 yards and 3 touchdowns as a junior, said there were several reasons why he chose to be a Hog.

“The biggest reason is how everyone there is treated like family,” he said. “The Hogs are so special. They are the only Arkansas football team. All of the coaches are wonderful and very talented. I’m already getting along with many of the players at the U of A and they already treat me like a player and it means a lot. And then the facility’s are the best in the SEC you don’t get anything better than that.”

Some schools have been working to get him on their campus.

"I was offered a few official visits, but declined because they asked me this week," Metcalf said. "I’m a Razorback."