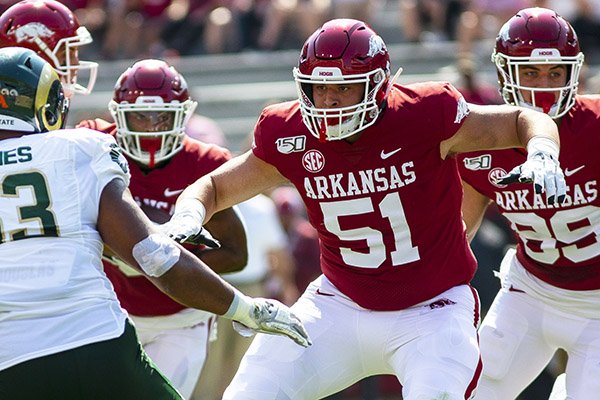 Arkansas offensive lineman Ricky Stromberg (51) is shown during a game against Colorado State on Saturday, Sept. 14, 2019, in Fayetteville.

FAYETTEVILLE -- Ricky Stromberg said his weight fluctuates between 275 and 279 pounds, which makes him a bit light for an SEC offensive lineman.

But while working to add weight, the 6-4 Stromberg compensates in other ways that have helped him become a starting guard as a true freshman for the University of Arkansas football team.

NOTEWORTHY Has played both left and right guard for Arkansas, and will make his third start tonight against San Jose State. … Changed commitment from Tulsa to Arkansas in late December when Razorbacks made a scholarship offer. … Rated a four-star prospect by 247sports and No. 19 guard in the nation. … Son of Diane and Scott Stromberg.

"He's got a mean streak to him, and that's really why he's playing as well as he is," Razorbacks Coach Chad Morris said. "I just think he's a really physical football player that's aggressive. He doesn't let the moment get too big for him.

"In fall camp going against some of the seniors and experienced guys up front, he never backed down. He's just a tough kid."

"Everyone's faster, everyone's stronger," Stromberg said of making the transition from playing at Tulsa Union High School to Arkansas. "Everyone I go against is bigger because of my weight right now. But overall, it's been pretty fun and exciting."

After Stromberg started against Ole Miss and Colorado State at left guard with senior Austin Capps out because of an ankle injury, he'll be in the lineup at right guard tonight.

"He's very athletic, plays with great balance," Morris said. "To be able to control his body and redirect himself has really helped him out a bunch, especially against some of these big defensive linemen -- and he's very smart."

Stromberg smiled when asked about his mean streak.

Capps, who played off the bench against Colorado State last week with Stromberg moving to right guard for some series, is starting tonight. But Stromberg has played too well to keep out of the lineup.

"As a player, you don't want to take any crap from other players," junior center Ty Clary said. "I think Ricky's definitely got that in him. He's not going to take anything from anybody. He's there to play.

"He's played hard. That's what impresses me the most about him."

Stromberg said he's adjusted to playing both guard spots through repetitions in practice.

"It was hard at first, but when they started switching me more and more, I got used to it," he said. "It's not really a big deal to me. It's just reverse the call in your head."

"Man, he's really good," Fry said. "You're going to be hearing that name a long time here on the Arkansas O-line.

"He's intense. Anything that happens, he's always just ready to go hit somebody else. There's nothing like, 'Oh my God, I'm overwhelmed.' He's in it, man. He's one of the most mature, locked in on the field guys that I've seen."

Stromberg is the first true freshman offensive lineman to start for the Razorbacks since Clary in 2017.

"If I need something on the line, Ty tells me what to do," Stromberg said. "He's kind of like a big brother to me, honestly."

Stromberg didn't expect to be starting this season.

"I came into camp just trying to make the travel squad, but I started playing and I kind of realized I could play with these guys," he said. "I had no clue I could.

"I realized I was going to play in the first scrimmage when I ran with the [starters] a little bit. Coach Fry then told me I was going to travel, so I got my mind prepared for it."

"He's not intimidated," Craddock said. "When we told him he was going to start against Ole Miss, he was just like, 'OK, sounds good, Coach.' "

Stromberg said he was more nervous than he let on at the time.

"I mean, I try to keep it under my skin, but inside I'm like a little kid jumping around," Stromberg said. "Outside, I'm just like, 'Yes sir, yeah.' "

Stromberg had two false-start penalties in last week's 55-34 victory over Colorado State, including on a fourth-and-1 play from the Arkansas 34 late in the third quarter with the score tied 34-34. After the penalty, Arkansas punted.

Stromberg said he didn't say anything back to the Rams when he made key blocks on touchdown plays.

"I just keep my mouth shut," he said. "I used to talk in high school, but I'm a freshman in the SEC. I'm not allowed to talk, really."

Stromberg was committed to the University of Tulsa as a high school senior, but flipped to Arkansas when the Razorbacks made a scholarship offer in late December.

If Arkansas hadn't offered, Stromberg said he likely would have gone to Oklahoma as a "gray shirt," meaning he would have delayed enrollment until January.

"I said it last year: I thought that he might be one of the biggest surprises in our signing class," Morris said. "Everywhere I went over in Tulsa, [the high school coaches] all spoke highly of Ricky.

"They talked about how physical he is, how he was one of the best offensive linemen in Tulsa. Obviously, playing for Union High School, he played in a great program, so we knew he was well-coached.

"I thought, 'Well, is he a little undersized for us?' But man, you just can't overlook what other people say about him and how hard he plays all the time. So we went on him, and we're very thankful we did."