Underdogs with bite: Gimme games have been anything but for Razorbacks in recent years 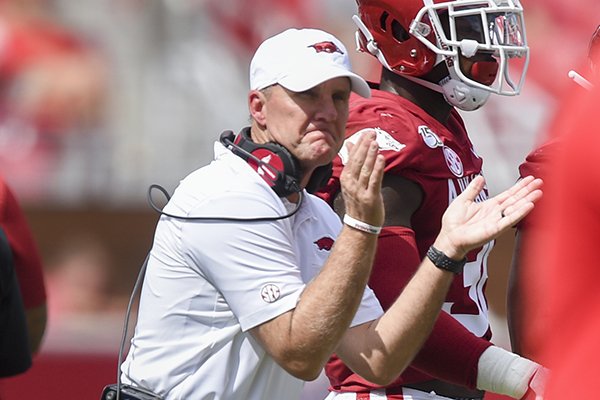 Arkansas coach Chad Morris claps during a game against Portland State on Saturday, Aug. 31, 2019, in Fayetteville.

FAYETTEVILLE -- In the not-too-distant past, the Arkansas Razorbacks were golden against lower-level competition.

Nowadays, University of Arkansas fans face games like tonight's 6:30 p.m. kickoff against San Jose State (1-1) with at least a hint of trepidation.

The Razorbacks are 20-6 in games against non-Power 5 opponents since the start of the 2012 season. A look at those games:

The Razorbacks (2-1) are a big favorite against the Spartans and are looking to build momentum from last week's furious fourth quarter in a 55-34 victory over Colorado State.

Arkansas fans might have a growing belief in second-year Coach Chad Morris' club, but they know better than to think their Hogs are a lead-pipe cinch tonight.

Not after the Razorbacks struggled against the likes of Coastal Carolina and Portland State recently, and lost outright to North Texas and on the road at Colorado State just last year.

A shocking 16-12 early season loss to Toledo is only four years in the rear-view mirror of regrets.

After Morris' post-game dancing with his team last week, he asserted that momentum is wearing Razorback red, and perhaps he's got a point.

Arkansas is a three-touchdown favorite over the Spartans in the first meeting between the programs.

Morris was asked whether style points are important for his team tonight.

Arkansas was a big favorite in the season opener against Portland State before hanging on for a 20-13 victory in an underwhelming offensive performance, even after having the ball in Vikings' territory on 11 of 12 possessions.

The numbers were on the uptick last week in junior quarterback Nick Starkel's first start. The Razorbacks racked up 520 yards, a program high under Morris, and put on a balanced display in the victory over Colorado State.

With the game tied 34-34 entering the fourth quarter, Arkansas outgained the Rams 140-34 in total offense to pull away.

"The great teams -- the teams that win national championships -- they typically run up the score on these teams," Clary said. "That's just a part of it. That's something that we want to do. We want to dominate."

Freshman receiver Trey Knox said the Razorbacks have to stay even keel while coming off an emotional fourth quarter.

"We're not going to get too high or too low," Knox said. "We're just going to stay the same and keep working and try to respond to a win, because it's all about how you handle success at this point, and hopefully we can have 'Uncle Mo' wearing an Arkansas jersey for the rest of the season."

Arkansas Athletic Director Hunter Yurachek, speaking the week after the Hogs' 31-17 loss at Ole Miss, hit on some themes that have gone in his hoped-for direction since then.

"Right now we're not getting some breaks, and sometimes you get into a little bit of a funk," he said. "We've just got to create some of our own breaks. If we can just get out early and have some confidence. I've watched this team practice enough during spring ball and during the preseason that there's good things ahead for this program."

A few years back, a nonconference game like this would have felt like a smackdown in the making. Coach Bobby Petrino was 13-0 in games against non-Power 5 opponents by a combined score of 547-217, for an average score of 42-17. And that was after escaping Western Illinois 28-24 and Louisiana-Monroe 28-27 in his first two games with the Hogs.

Those Hogs were money.

Since 2012, Arkansas has a 20-6 mark against Group of 5 or FCS opponents, and some of those days will live in infamy with the Razorback Nation.

John L. Smith's No. 8 team in 2012 fell 34-31 in overtime to Louisiana-Monroe after quarterback Tyler Wilson left with a concussion. Bret Bielema's 2015 club lost the 16-12 decision to Toledo despite outgaining the Rockets 515-318 in total yards.

Smith and Bielema both lost games to Rutgers before the Scarlet Knights joined the Big Ten and returned to their cellar-dwelling ways.

Last year's Razorbacks lost a 34-27 heartbreaker at Colorado State, a game they controlled for three quarters, then face-planted the next week in a 44-17 loss to North Texas. Morris and his team hope those days are long gone.

An analytic website called The Power Rank gives the Razorback an 83% chance of beating San Jose State, the second-highest odds for an SEC team this week. Alabama has a 98% chance to beat Southern Miss, according to the same metric.

San Jose State Coach Brent Brennan understands his team is a big underdog, though he sees parallels between the Spartans and Razorbacks.

"They're kind of in a similar process as we are," Brennan said on his weekly show on Facebook. "They're rebuilding a program and they're fighting tooth and nail. They had a really nice win last weekend, and they've got a great-looking football team."

The Hogs are 15-2 against teams in the current Mountain West Conference, including the two-game split with Colorado State the past two seasons.

Morris said the way the Razorbacks won last week with a fourth-quarter rally was extremely important.

"We've got to get better," he said. "That was one game last week. We executed really well. The challenge is can we string weeks together and put good days on top of good days? And our main goal is to win a football game on a Saturday night in front of our home crowd and defend our home stadium."

Knox is taking this perspective into the game against the Spartans.

"I think we're growing together as a team and just getting another win would help us to have that edge about us being 3-1 going into Texas A&M."