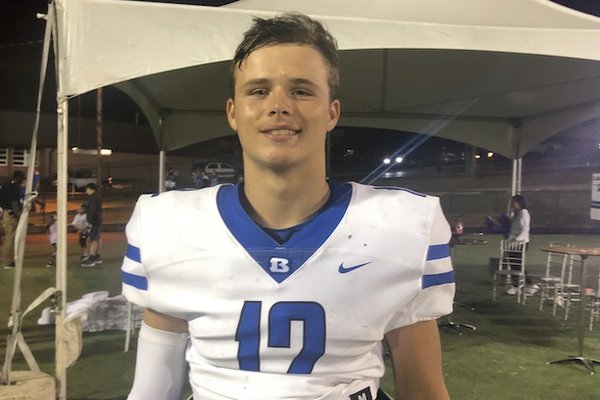 FAYETTEVILLE — Bryant junior Austin Ledbetter knows he is going to play baseball for Arkansas, but he also has thoughts of being a Razorback in another sport.

After completing 10 of 20 passes for 203 yards and 2 touchdowns in his top-ranked team’s 42-13 win at No. 3 Fayetteville, Ledbetter (6-1, 190) acknowledged that he is still casting an eye toward football in college as well.

“I would like to play both if I get an opportunity,” Ledbetter said. “I do plan on playing both, but I have a lot of time to decide.”

The Arkansas baseball pledge expects to be a pitcher for the Razorbacks, but is also being looked at as a corner infielder.

“I think I will pitch,” Ledbetter said. “They have talked to me about playing corner. That’s what I played in the summer. In high school ball I play the corner and pitch a lot.”

Ledbetter, a cousin for former Arkansas players DJ and Blake Baxendale, has three pitches and is working on developing a fourth.

“I work with the two-seam (fastball), changeup and curveball,” Ledbetter said. “I’m working on a slider right now.”

Ledbetter committed to Arkansas coach Dave Van Horn on April 4, 2018, when he was a freshman, after also considering Oklahoma and TCU.

The Razorbacks have been to back-to-back College World Series and came within an out of winning the national title in 2018.

“It’s unbelievable,” Ledbetter said. “Just the atmosphere of Baum. Just being there.”

He found out after his football game on Friday night that Arkansas had 6,000-plus fans at Baum-Walker Stadium for an exhibition game with Oklahoma.

“When Evan Lee was there I looked up to Evan Lee,” Ledbetter said. “I used to work out with Evan when he was at Bryant. Blaine Knight was a Bryant kid. They’re all good dudes and I just like to watch them play.”

Ledbetter tossed touchdown passes of 51 and 60 yards Friday night as Bryant moved to 3-0 on the season.

“Offensively we have some bumps and things like that we need to clean up,” Ledbetter said. “We just need some more execution on the offensive side. Defense is doing really well. They put up zero against (Bentonville) West and put up (13) against Fayetteville, which is a very good, skilled team. Now we just need to keep the train going.”

Ledbetter has taken over at quarterback for Bryant this season after splitting time with Ron Hefley, who walked on at Michigan. He was 33 of 58 passing for 549 yards and four touchdowns as a sophomore.

“Austin waited,” James said. “He was a good player for us last year. We played him in some crunch time. He’s just a winner. Before that kid is done I think he’s going to be some kind of special.

“He sees it. He’s like a coach on the field. He knows it’s going to happen before it happens. He throws them open. He has a lot of intangibles you don’t just see on Friday night. I think this guy could be one heck of a college quarterback.”