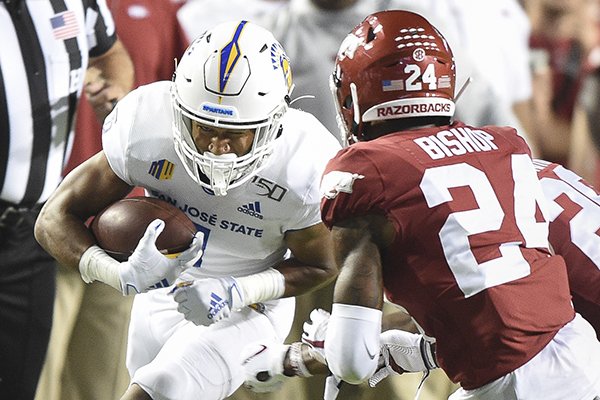 FAYETTEVILLE -- A cornerback from Ashdown started for the University of Arkansas football team for the fourth consecutive game, but Saturday night it was LaDarrius Bishop instead of Montaric Brown.

With Brown, a redshirt sophomore, out because of a leg injury he suffered last week against Colorado State, the redshirt freshman Bishop made his first career start at cornerback.

Junior Myron Cunningham, who started the first three games at right guard, started at left tackle in place of Jackson.

The Razorbacks started two tight ends with seniors Cheyenne O'Grady and Chase Harrell, who took Burks' place in the lineup with sophomore Mike Woods and freshman Trey Knox as the starting receivers.

Sophomore linebacker Bumper Pool, who missed the second half against Colorado State because of a shoulder injury, started Saturday night.

Senior left guard Austin Capps started for the first time since the opener. He missed the Ole Miss game because of an ankle injury and played off the bench against Colorado State.

With Capps back in the lineup, true freshman Ricky Stromberg moved from left to right guard and made his third consecutive start.

Fans cheered when Arkansas Coach Chad Morris passed on a field goal attempt and decided to go for the first down on fourth and 2 from the San Jose State 4 with 6:55 left in the first quarter.

But the play didn't have the desired result for the Razorbacks or their fans.

Running back Devwah Whaley was tackled for a 2-yard loss by defensive end Christian Johnson and linebacker Kyle Harmon.

Arkansas went for it again on fourth and 1 from the San Jose State 23 with 8:22 left in the second quarter, but Nick Starkel was stopped by nose tackle Sailosi Latu for what officially was no gain on a quarterback sneak. A measurement showed Starkel was a couple of inches short of getting the first down.

Colorado State also was stopped on fourth and 1 from the 50 with 10:50 left in the third quarter.

Arkansas senior defensive end Jamario Bell, who had missed the previous two games because of a knee injury, recorded his first career sack when he dropped quarterback Josh Love for a 9-yard loss in the third quarter.

Illegal formation penalties on back-to-back plays called on San Jose State negated 24 yards and caused a drive in the first quarter to stall out and result in a missed field goal attempt.

On first and 10 from the Arkansas 33, quarterback Josh Love threw a lateral to wide receiver Sitaleki Nunn, who then passed to tight end Brett Foley for a 16-yard gain.

After that play was called back, Dejon Packer rushed for 8 yards, but that gain also was wiped out.

Arkansas paid San Jose State a $1.5 million guarantee for coming to Fayetteville to play the Razorbacks. It was the Spartans' first game against the Razorbacks.

Three of Arkansas' four opponents have scored on their first possession of the game.

Josh Love's 3-yard touchdown pass to JaQuan Blackwell capped a 75-yard drive for San Jose State to open the game and put the Spartans ahead 7-0.

Portland State hit a field goal on its first possession, and Colorado State scored on a 75-yard touchdown run on its first play from scrimmage.

Arkansas forced a punt at Ole Miss on the Rebels' first possession.

Keith Burns, who played defensive back at Arkansas and was the Razorbacks' defensive coordinator from 1998-99, held the same position at San Jose State from 2004-09.

Willy Robinson, Arkansas' defensive coordinator from 2008-11, was a graduate assistant with the Spartans in 1979.

Arkansas has won the coin toss in its first four games and deferred each time, kicking off to open and then receiving the kickoff to start the second half.

San Jose State assistant coach Alonzo Carter made some national ripples a couple of years ago. A former backup dancer for the singer M.C. Hammer, Carter showed his team some of his dance moves in a video that hit it big on YouTube in the fall of 2017.

Talk show host Ellen Degeneres got wind of Carter's moves and surprised Carter, Coach Brent Brennan and a selection of players by giving them a surprise visit on her show. The segment ended with Degeneres promising a $25,000 donation to a charity that the Spartans promote.

Kenoy Kennedy, an All-American safety for Arkansas as a senior in 1999 who played eight seasons in the NFL with the Denver Broncos and Detroit Lions, served as the Razorbacks' honorary team captain on Saturday night.

Arkansas hosted about 70 prospects on unofficial visits Saturday night for the San Jose State game at Reynolds Razorback Stadium in Fayetteville. Here are some of the notable prospects who attended the game: