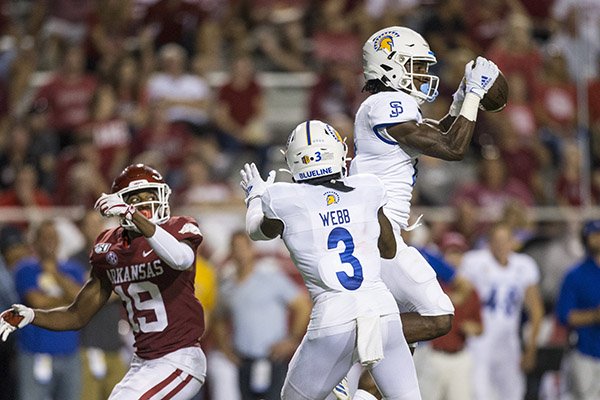 San Jose State defensive back Bobby Brown intercepts a pass during the fourth quarter of a game against Arkansas on Saturday, Sept. 21, 2019, in Fayetteville.

FAYETTEVILLE -- San Jose State flew east with a bag of tricks, plenty of bravado, a heady quarterback and nothing to lose.

The Spartans intercepted University of Arkansas quarterback Nick Starkel five times in their territory, stopped a pair of fourth-down runs and stunned the Hogs 31-24 on Saturday before an announced crowd of 56,058 at Reynolds Razorback Stadium.

San Jose State (2-1) left Arkansas with a $1.5 million guaranteed check -- handing the Hogs the highest-losing payout of the season, according to ESPN's Darren Rovell -- and its first victory over an SEC team in seven meetings.

"They outplayed us, they outcoached us, and I was very disappointed in the effort we got tonight," Arkansas Coach Chad Morris said. "For three quarters, they were the SEC football team. They took it to us.

"Everyone's going to be held accountable from me down. Totally unacceptable. We're going to get back in here [Sunday], and we'll figure it out."

San Jose State Coach Brent Brennan entered the game with a career record of 4-23, but the Spartans used an open date last week and the addition of speedy receiver Tre Walker after a two-game suspension to hone their run-pass option attack and spice things up with end arounds, flea flickers and other trickery.

"What a night," Brennan said. "Coming off a loss two weeks ago, our team just went to work. We practiced during the bye week a lot. I'm sure they didn't like that, but now they understand why.

"I'm just really proud of them because this is a team, I'm on my third season, and it's been two really hard years. Arkansas makes a run late and we didn't fold, we actually bowed up."

Arkansas (2-2), trying to build momentum after a dominating fourth quarter in a victory over Colorado State last week, saw its bowl hopes take a huge hit with the loss in their first meeting with the Spartans. The Hogs have not won back-to-back games under Morris.

"I was a little concerned in pre-game warmups, to be honest with you," Morris said. "I thought we were a little too loose ... a little too giddy. We're not good enough to come out and just walk out on the field with a Razorback logo on your helmet and expect you're going to win. You've got to show up and play, and we didn't show up and play in no phase of it."

Josh Love completed 32 of 49 passes for 402 yards and 2 touchdowns, and he directed a nearly perfect two-minute drill to break a 24-24 tie with time winding down.

The Spartans outgained Arkansas 503-487 in total offense and held the Razorbacks' run game, which had clicked in their 55-34 victory over the Rams last week, to 131 yards.

Walker had 12 receptions for 161 yards, while Isaiah Holiness and JaQuan Blackwell had touchdown catches for the Spartans.

The Razorbacks rallied from a 17-point second-half deficit to tie the game on Trey Knox's 8-yard touchdown reception from Starkel with 2:56 remaining. Arkansas was called for holding on its PAT attempt, but Connor Limpert booted the 30-yard extra point through the uprights to make it 24-24.

Arkansas had shut out the Spartans through the second half and needed one more defensive stop to fend off the upset bid, but the Hogs couldn't get it.

Love completed consecutive passes of 12 and 18 yards to Walker, then found Blackwell for 24 yards on a deep back-shoulder throw. DeJon Packer stormed through the right side for a 19-yard touchdown run to make it 31-24 with 1:13 remaining.

"We had the confidence to win the game, but it didn't happen," said Arkansas safety Kamren Curl, whose first-half interception was Arkansas' lone takeaway. "They made some plays in the air, and then they had that rushing touchdown. We just didn't tackle."

Bobby Brown picked off Starkel's deep throw for Mike Woods on the next Arkansas play, and the Spartans completed the game in the victory formation.

Starkel completed 28 of 50 passes for 356 yards and 3 touchdowns to go along with the 5 interceptions. Woods caught four passes for 115 yards to register his first 100-yard game.

Starkel's five interceptions were the most by an Arkansas quarterback since Wade Hill threw five in a 24-15 loss to Georgia in the 1991 Independence Bowl.

"I felt like I tried to force the ball a little bit," Starkel said. "Definitely wasn't just taking what the defense is giving us.

"It was just bad quarterback play, and I feel like I let everybody down and I let my teammates down, my brothers, my family, these coaches that worked so hard to prepare us, get us in the right calls. I just let them down."

San Jose State won the turnover battle by a margin of 5-1.

Trailing 24-7 at halftime, the Razorbacks drove to the San Jose State 31 and 7 on their first two possessions of the second half but did not score.

Safety Jay Lenard made a diving interception over the middle at the San Jose State 13 to end the first possession. Cornerback Nehemiah Shelton anticipated a throw near the goal line for Knox on the second series and intercepted Starkel at the 1.

The Razorbacks finally got points on their next two possessions.

Limpert's 47-yard field goal pulled Arkansas within 24-10 with 5:01 left in the third quarter.

The Razorbacks tightened the margin on their next series, but needed a critical fourth-down conversion in their own territory to do it. Devwah Whaley ran 16 yards with a pitch play over left end to convert the fourth and 1 from the Hogs' 29. Three plays later, Tyson Morris caught a slant over the middle and braced for contact. He took the hit, spun away from two defenders and turned it into a 30-yard touchdown.

Arkansas went three and out on its next possession but tied the game with an 80-yard drive.

Woods caught a 40-yard pass to convert third and 13, then Starkel found Knox for the tying touchdown.

Love capped his huge night by going 3 for 3 for 54 yards on the winning drive.