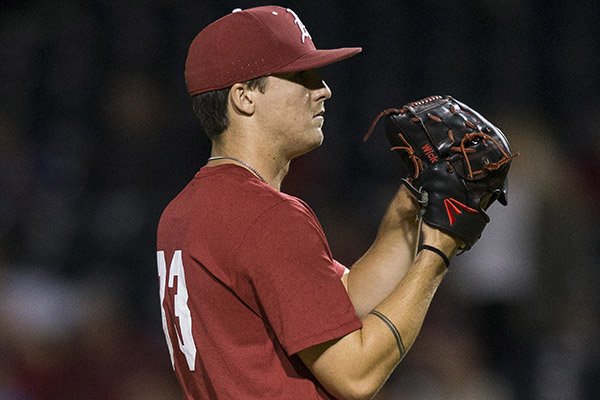 Arkansas pitcher Patrick Wicklander looks toward the mound during an exhibition game against Oklahoma on Friday, Sept. 20, 2019, in Fayetteville.

FAYETTEVILLE -- It was a pitchers' duel Friday night at Baum-Walker Stadium.

The University of Arkansas baseball team used 12 pitchers and Oklahoma used 14, but the Razorbacks and Sooners combined for just seven runs over 14 innings in an exhibition game before an announced crowd of 6,387.

Oklahoma was ahead 4-3 when the game finally ended at 12:12 a.m. on Saturday, and the Sooners won the nine-inning portion of the exhibition 4-2.

Over the first nine innings, the Razorbacks had six hits -- five singles and Heston Kjerstad's triple -- and struck out 13 times.

"We didn't have a good night at the plate," Arkansas Coach Dave Van Horn said. "Give credit to their pitching. They got after us.

"Their first six or seven arms shut us down pretty good. We just couldn't come up with the big hit. But it was a good learning experience for our players.

"Some of the young guys probably get more out of this than the guys who have been around for a year or two. Now I think [the newcomers] realize everybody at this level is pretty good."

Oklahoma had 13 hits in the first 9 innings along with 4 walks, but left 13 on base.

"They got some runners on, but that's going to happen throughout the year," Van Horn said. "It wasn't because we were walking them for the most part. They hit their way on.

"I think it's always good when pitchers find a way to get out of jams. We showed a little bit of something there."

Sophomores Patrick Wicklander and Connor Noland -- who both were part of Arkansas' SEC rotation last season -- each allowed a run in two innings. Tanner Tredaway led off the fifth inning with a home run against Noland.

Arkansas starter Kevin Kopps went only the first inning, when he allowed two singles, stranded both runners and threw 21 pitches.

"We were going to give him two innings if it went well," Van Horn said. "It didn't go real well. He didn't command the baseball like normal, and we just went to the next guy."

Zebulon Vermillion and Kole Ramage each pitched a scoreless inning for the Razorbacks. Marshall Denton came into a bases-loaded jam with one out in the eighth inning -- after Jacob Burton had allowed a run -- and got a double-play grounder.

Elijah Trest allowed an Oklahoma run in the ninth inning.

"Our pitchers really did a great job," Van Horn said. "We had one bad inning, maybe two."

Van Horn also was pleased with the four pitchers Arkansas used in the 10th through 14 innings when the Sooners didn't score.

"They got out there and threw the ball over the plate with good stuff," Van Horn said. "There's going to be a push to get on the mound this year.

"I feel like Coach [Matt] Hobbs and the pitching staff have been really good all fall. They were good again tonight. We just didn't score enough runs. That was the negative."

Kerstad, a junior, started at first base after playing in the outfield the previous two seasons. He had no mistakes on defense while going 2 for 4 with a run scored.

Cole Austin, a senior transfer from Arizona State, started at third base for the Razorbacks and went 2 for 3 with a walk, run scored and 1 RBI. He also made two nice defensive plays, with a diving stop and sliding stop with strong throws to get the outs.

"He made a little bit of a statement that he's a good player," Van Horn said. "A good defender, and he's going to help us out a lot."

Arkansas and Oklahoma will play twice during the 2020 regular season. The teams will meet Feb. 28 at a tournament in Houston, and Arkansas is traveling to Oklahoma for a midweek game on a date that hasn't been announced.

"I think it's good," Van Horn said of getting an early look at the Sooners. "Probably good for them, too. We didn't show them everything, and they didn't show us everything."