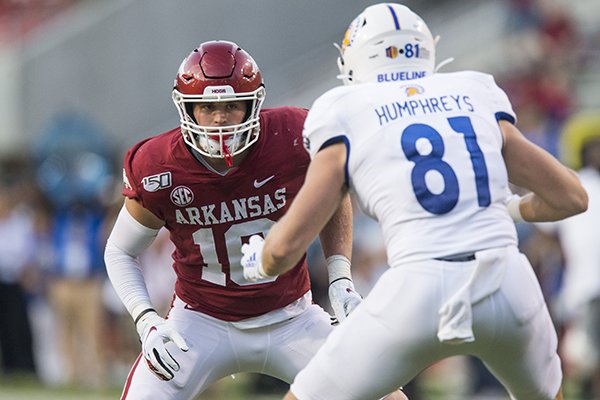 FAYETTEVILLE -- San Jose State's first offensive play against the University of Arkansas football team went for 50 yards on a pass from Josh Love to Bailey Gaither.

It was a sign of bad things to come for the Razorbacks' defense.

The Spartans, who gained 382 yards against Northern Colorado and 348 against Tulsa in their first two games, piled up 503 in beating Arkansas 31-24 on Saturday night at Reynolds Razorback Stadium.

"I think they got us on our heels on the first play of the game," Arkansas Coach Chad Morris said. "From that point forward, these guys, they just needed a little bit of momentum, a little bit of life, and they felt like, 'Hey, we're going to get these guys on their heels,' and you've got to credit those guys. They were aggressive and made some plays."

"I thought they did whatever they wanted to do as far as throwing the football," Morris said. "The Love kid had a career night."

It actually wasn't a career-high for Love in terms of passing yards and touchdowns, but to surpass his numbers against the Razorbacks took him five overtimes previously.

Arkansas sacked Love just once, when defensive end Jamario Bell dropped him for a 9-yard loss in the third quarter.

"I didn't think we could get any pressure on the quarterback," Morris said. "I thought the guy had a chance to sit back there and eat a sandwich and pick us apart underneath.

"I mean, really, that was it. We didn't get much pressure on him. And when we did, he was throwing the ball up, and he got a couple of calls."

"I mean, they called it and we apparently did it," Morris said when asked whether he thought the calls were borderline.

San Jose State had 305 yards in the first half to build a 24-7 lead, but the Arkansas defense shut out the Spartans in the second half until they scored the game-winning touchdown on DeJon Parker's 19-yard run with 1:13 left.

"We had the confidence to win the game, but it didn't happen," Razorbacks junior safety Kamren Curl said. "They made some plays in the air, and then they had that rushing touchdown. We just didn't tackle."

The Spartans started the game-winning drive in a first-and-15 hole after a delay of game penalty, but backup quarterback Nick Nash rushed for 7 yards, then Love hit Tre Walker for 12 yards and 18 yards before finding JaQuan Blackwell for 24.

"But [Love] made some plays. They didn't turn the ball over but one time. Those guys, give them credit, they found a way to drive down the field on us and they made some plays. We weren't there to make them."

"We just had breakdowns in the back end," Curl said. "We just got to watch the film and see what we did wrong."

Walker, a junior who missed San Jose State's first two games for an undisclosed disciplinary reasons, had 12 catches for 161 yards.

"He's a good player," Curl said. "He made plays today. That's your goal, try to make plays for your team. That's what he did."

Walker had 65 catches for 1,002 yards combined in the previous two seasons.

"We knew that he was a great receiver," Morris said. "But my goodness, the guy had 161 yards."