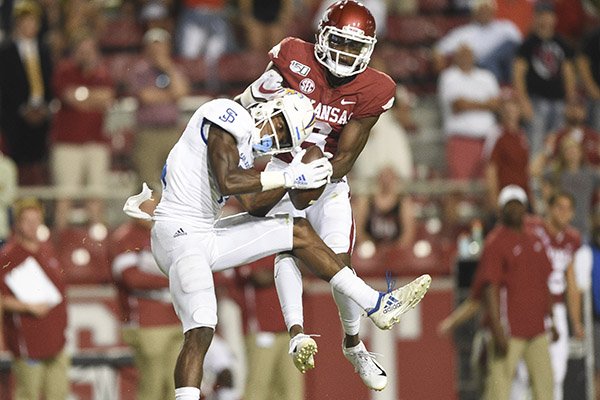 FAYETTEVILLE — Before Arkansas can expect to win in the SEC, it has to compete more consistently against the Mountain West Conference.

With its stunning 31-24 victory, San Jose State dropped the Razorbacks to 1-2 against MWC teams in the Chad Morris era. Arkansas also lost to Colorado State last season and scored the final 21 points to defeat the Rams last week.

Morris' team is now 2-3 against teams from the Group of 5 conferences. The Razorbacks shut out Tulsa and were blown out by North Texas last season in Fayetteville.

The difference in the two games was Arkansas' second-half response. Instead of folding like they did a year ago when North Texas went ahead by as many as 34 points, the Razorbacks fought back and tied the game at 24-24 with less than three minutes remaining Saturday.

But the need to come back at all illustrates just how poor of a position Arkansas finds itself in under Morris. After the game Morris said, "We're not good enough to walk out on the field...and expect you're going to win. You've got to show up and play, and we didn't show up and play."

• This loss will go down as one of Arkansas' most forgettable, alongside some others during the Razorbacks' eight-year struggle.

To give an idea of how bad San Jose State has been, consider:

— The Spartans had not defeated a Power 5 team since 2006 - a streak of 25 games entering Saturday.

— San Jose State has lost 11 games in each of the past two years and its third-year coach, Brent Brennan, improved to 5-23 in his career with the victory at Arkansas.

— Since moving to the MWC in 2013, the Spartans' only regular-season victories over nonconference teams were against members of the NCAA's Football Championship Subdivision.

The Razorbacks were a 20 1/2-point favorite, rather telling given their own shaky play. It was Arkansas' first loss in a game they were favored to win by that much since 2015 when 21-point underdog Toledo won in Little Rock.

According to reports the Razorbacks paid San Jose State $1.5 million to play the game.

• Arkansas' offense had shown life with Nick Starkel at quarterback for the majority of six consecutive quarters entering Saturday's game.

Starkel was fortunate he didn't throw more interceptions, getting away with at least two more passes that could have been picked.

To make matters worse, the Razorbacks twice were unsuccessful on fourth down at the San Jose State 4 and 23. The decision to kick field goals in either of those instances almost assuredly would have created a different scenario in the fourth quarter.

Arkansas' Connor Limpert made his only field goal attempt of the game - a 48-yard in the third quarter - and was the reigning SEC special teams player of the week after he made a 54-yard attempt last week.

The Razorbacks had 26 first downs and 487 yards of offense, but only scored four times.

Arkansas' run game totaled 131 yards on 32 carries. It wasn't so much that the Razorbacks struggled to run the ball (they averaged 4.1 yards per carry) as they had to abandon the run game when they fell behind.

It was thought that Arkansas could have success running the ball against the Spartans. In its previous game San Jose State allowed 256 yards on 47 carries against Tulsa, a team that had rushed for minus-73 yards the week before at Michigan State.

Arkansas' biggest issue was in short yardage, notably the inability to convert a pair of fourth-and-shorts with called run plays in the first half.

The Razorbacks allowed 503 yards, including 402 passing to a quarterback who threw for 1,963 yards in eight starts last year while playing in a conference that does not play good defense.

This is the third consecutive week Arkansas' defense has allowed gobs of chunk plays. San Jose State had 21 plays of 12 yards or more, often on slant passes that were especially effective before halftime.

Those numbers, coupled with a 16-game sample and plenty of youth at Arkansas, do not encourage that the Razorbacks will quickly turn things around on that side of the ball. It puts an onus on the offense to score big, and when that doesn't happen outcomes like Saturday's aren't so surprising, regardless of the opponent.