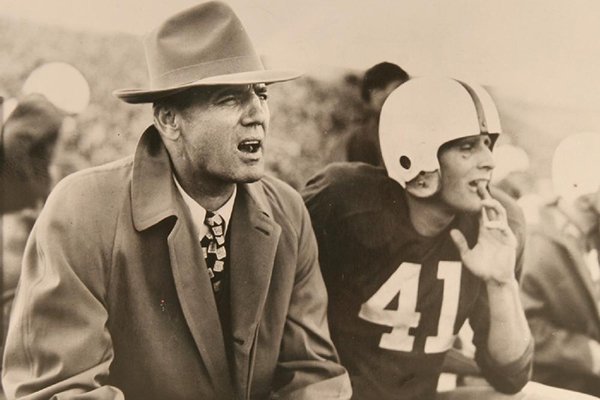 Arkansas coach John Barnhill and player Buddy Sutton watch from the sidelines during an undated game at War Memorial Stadium in Little Rock in 1949. The photo is the cover of the new collector's book "Footsteps Have Trod: 125 Seasons of Arkansas Football."

FAYETTEVILLE — Nine individuals associated with the Arkansas Razorbacks will be inducted into the Southwest Conference Hall of Fame during a ceremony Nov. 11 in Little Rock.

Barnhill, Rose and Richardson will be inducted posthumously.

The induction will take place during the Little Rock Touchdown Club meeting at the Doubletree Hotel Downtown.

This year's class is the sixth large class of Razorbacks to be inducted in an effort to add more Arkansas athletes and coaches to the hall. With their addition there will be 66 individuals associated with the Razorbacks who are in the SWC Hall.

Jones and Johnson had been inducted into the Texas Sports Hall of Fame by virtue of their affiliation with the Dallas Cowboys.