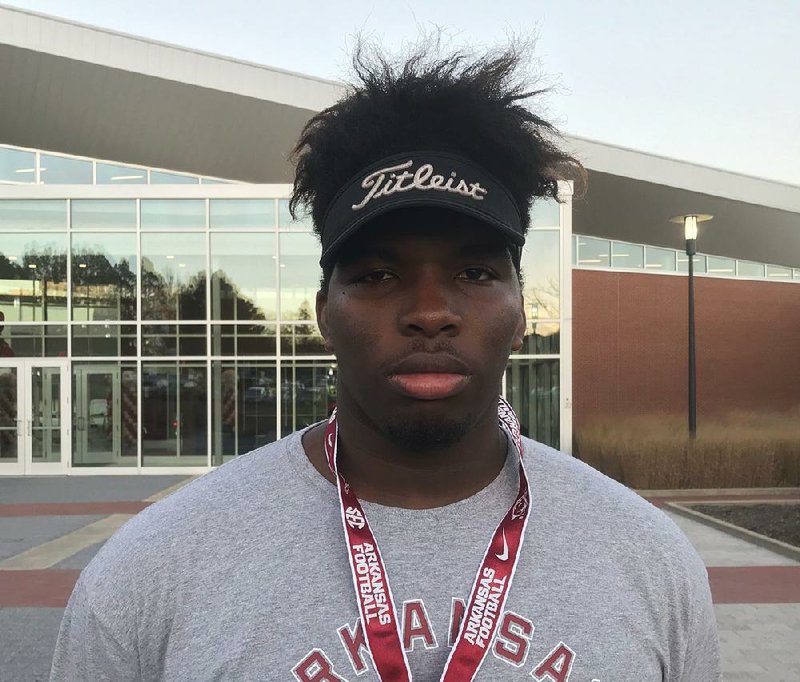 CARTHAGE, Texas — Arkansas offensive line commitment Ty’Kieast Crawford is confident the Razorbacks will bounce back from the loss to San Jose State and believes his class will help the Razorbacks get back on track.

ESPN rates him a 4-star prospect, the No. 24 offensive tackle and No. 185 overall prospect in the nation for the 2020 class. ESPN ranks the Hogs’ class of 15 commitments No. 26 nationally.

He said Morris and the staff are in the process of rebuilding the program, but sees the Razorbacks turning the corner next season.

“You can still tell they’re still building and trying to get it to where it used to be,” Crawford said. “So that means when my class comes in it’s probably going to be ready, but at the same time I feel like my class is the one that’s going to set it off.”

Carthage coach Scott Surratt, who was former Razorback Ryan Mallett’s quarterback coach from the 8-12th grade, said Crawford has been outstanding during the early part of the season.

“He’s a leader upfront on the O-line for us,” Surratt said. “He’s doing a great job for us this year. We moved him from right to left tackle this year to protect the quarterback. He’s done a phenomenal job. Seeing how far he’s come maturity-wise has been fun to watch. He’s a special kid to be a round. He’s always laughing and having fun.”

Arkansas will be the home team against Texas A&M in Arlington, Texas, on Saturday, which allows the Razorbacks to distribute tickets to recruits. Crawford called offensive line coach Dustin Fry on Sunday and spoke to him and associate head coach and running backs coach Jeff Traylor to request tickets.

He announced his plans to attend the game on Twitter and Arkansas fans showered him with love. He plans to meet up with some fans in Arlington.

“It’s great because everyone knows who I am and people respect me,” Crawford said. “I’ll take some pictures with them and sign a few things for them.”

He also plans to make a game in Fayetteville with his teammate and fellow Razorbacks pledge Kelvontay Dixon.

“I should be there for the Auburn game,” Crawford said.

He recently made another trip to Baton Rouge to visit LSU.

Crawford, who has visited Fayetteville five times since last fall, made his official visit to Fayetteville in April. He plans to officially visit others after his season.

“Mainly all of them will have to be after the season,” Crawford said. “LSU, (Texas) A&M, West Virginia and the last one is undecided.”

When asked when he would make a final decision after his other visits, Crawford implied his that decision has already been made.

“I don’t think it’s going to come down to anything,” he said. “I think I’ll still be 100 percent with Arkansas.”

Crawford plans to sign on the traditional first Wednesday in February so he can have a ceremony with his teammates.

“I feel like that’s when everybody really signs and that’s when the people I know here sign,” Crawford said.

He had a message for Arkansas fans.

“I love you guys and I’m coming home soon,” he said.