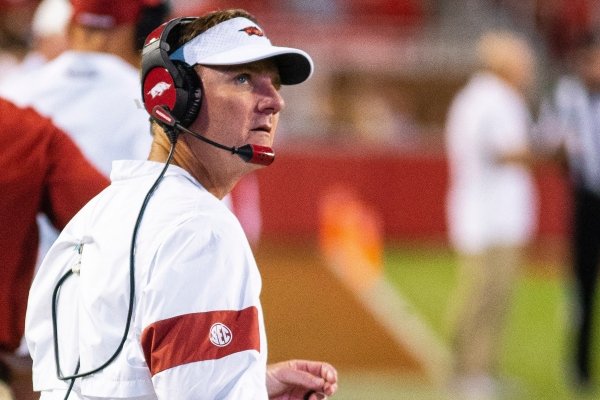 • Treylon Burks, who did not play against San Jose State (concussion protocol) is listed as a starter this week vs. Texas A&M at receiver and punt return.

• Cornerback Montaric Brown (muscle strain) is down as a starter this week, too. He did not play on Saturday, giving way to LaDarrius Bishop's first career start.

• Senior offensive lineman Colton Jackson (concussion protocol) is listed as a starter as well. He also wore a walking boot on the sideline Saturday evening.

• Offensively we had seven possessions where we didn't get any points. We were too inconsistent. We decided late in the third quarter we were going to turn it on, but we waited too late to get it done.

• Defensively it was a tale of two halves. We gave up too much in the first half and too many drive-continuing plays. They responded in the second half right up until the last drive. We didn't make a play and they did. The only thing we can do is go back to work. That's everybody - players, coaches. Our total focus is getting this team prepared for this weekend. We're going to find out a lot about ourselves.

• We've got a tough SEC game ahead and it's always been a good ballgame. They have nine returners back - 5 on offense, 4 on defense.

• We always self-scout ourselves and see if there are any tendencies. The preparation last week, I thought we had a good week of practice. They responded coming off Colorado State. I did not see that coming through the prep we had.

• On holding everyone accountable: It's the performance at all levels from everybody. We have to get our guys to play at a high level. Coaches have to get guys ready to do that. They need to be ready to play fast and play hard. We have to make sure we're not overlooking any aspect of our program. It's from me on down to the equipment guys.

• The little things we let slide lead to big things. As I mentioned a minute ago, there was nothing in practice I saw last week that made me believe we would not come out and perform well. There was nothing that led to that.

• Offensively, we pressed and tried to make a 14-point play. I thought that there were some things there ... we give our guys freedom, and it's what has made our scheme successful. But when you don't hit on those plays it hurts. We can't press. I felt that we pressed too much, especially as the game went on.

• I think when you're down 24-7 and you have a lot of time left, you play within the system. Run the offense you're able to run. As it went, early in the second half, we had to start throwing the ball a little more often.

• We have to get Nick Starkel better prepared for what we're asking of him. That's completely on me. It's not on him.

• On being too loose pre-game: What I recall was that I didn't feel it was as tight as it needed to be. That hasn't been the first time I've felt that. You feel that as a coach sometimes. I felt something different I didn't feel the week before. When we called them up at the end, I addressed it right then and there. I have no problem telling my team what I see and what I feel. I felt we were too loose, we need to tighten it up and let's get this thing right. That hasn't been the first time in many different stops. It happens. That was the one point where I thought something wasn't right.

• Guys showed back up Sunday and came to work. I feel like this was a huge learning experience for everyone involved in our program right now. I expect nothing more than for us to set our jaw and keep working. It's about a response right now.

• More on Starkel: He was extremely disappointed and felt he had let his teammates down. He was back in yesterday and he'll respond. He didn't play to his standard or our standard. You play this game long enough, it might not be the last time he doesn't feel like he plays to his standard. The response and how we handle things is going to define us. Nick was one of the first guys in here Sunday ready to go.

• Every is part of our every day talk. We talk about that word all the time. Our message to the fans is that was unacceptable, embarrassing and I hurt for our fans and players and coaches and our program and university. That performance is not who we are. We have a choice now and we can dwell on it or do something about it. I will be totally shocked if they don't respond.

• We've been in this situation before, and it's not a one-year finished product. It is a continuation, program building. As a player and recruit, you see opportunities. We'll recruit the guys who love the Hogs and want to be here.

• On the Texas A&M series: The Dallas area means a lot to our recruiting footprint. My only focus is getting this team getting ready to go down there this week. Whether he prefers the game to be played on campuses again is a conversation for another day, he said.

• On Jevan Snead's passing: It was a difficult phone call to get. Thoughts and prayers to his family. He was like a son to my family and I. It's tough.

• Not a whole lot to say other than we didn't get the job done. The team has to be better prepared. I know you wonder how does it happen? And I do, too. I don't have the answer right now at this point, but it's coming. We have to play much better. We're capable of much more. San Jose State was ready to play.

• SJSU did a good job getting rid of the ball quickly. It's hard when there's a lot of quick game. Receivers did a good job running routes, getting open and catching the ball. We made adjustments at halftime, but it wasn't enough. We didn't see anything we didn't expect.

• On playing A&M: Really, it's the next game. I'll say this, my time over there, I was treated as well as I could be treated. Good people in the administration. It's just the next game and it's what we're looking forward to, and we have to be our best. We have talent - and I'm not going to compare the talent - but we have to have a great week of practice. It's going to take our best week of prep of the season.

• Our guys got ready to play last season against the Aggies. They were ready to play and we kept it simple. Kellen Mond is a talented guy who can beat you with his arm and with his feet. It's going to be a big challenge getting him where he's not comfortable.

• There were a couple of back-shoulder throws they got us on on the final drive. Am I surprised? Yeah, I didn't expect that to happen. We didn't have the right call and we didn't execute. I haven't had many like that, but I've had enough to know that when certain things align it's a possibility.

• I'm not going to talk about attitude. Maybe we were a little immature. I don't know that for sure. The kids have had a great attitude. Sure, we can say things and make excuses, but it's my responsibility. Could we have competed better in some situations? Sure. That goes back to what you get done in practice. It's frustrating for me because I know we have to play better. We have a list of things we're going to get done. I'm not going to give you the list, but we have to attack those things with a sense of urgency. We have to get it done. Where we are, we can't allow it to continue to go that way. If you lose a game because someone is better than you, OK. But when you don't play well enough and you have an opportunity to, it hurts you. I haven't slept much.

• We've talked about me going back upstairs, and I could be up there this weekend. He did not give a firm answer.

• We're auditioning all the time. I'm not going to name names, but there could be some changes on who is on the field.

• Pretty embarrassing. It took a basically a half to decide we wanted to play. That's on me, and I take the blame for that one.

• In the second half, early on, we tried to stick with our game plan. I'm not sure the number of times, but Nick threw it on a run play. He found Mike Woods down the field. They were dropping eight. That was entirely too many pass attempts. I think he was trying to do too much. When we got down, we all pressed. When you feel like you're better than the other team you just have to execute. I have to call better plays.

• The biggest thing I can think of is when Rakeem Boyd runs for eight yards, we tempo it, throw to Koilan Jackson incomplete then we don't pick up the first down on third down and the drive stalls.

• Everybody has a bad day. It's all about trying to overcome some of those throws. Last week he was throwing balls on the money, but they were high this week. He has to keep his base, trust protection and make throws. Take a check down or two. That's going to happen, but you have to overcome it and he'll do that as he keeps growing.

• SJSU did a nice job. They had a week off and they played some new fronts and techniques. We could have done better, but the most disappointing thing was how unsuccessful we were in short-yardage situations.

• I hope this game means the same to Rakeem and Nick as any other game. I think they'll look at it the same way we do as a staff, that it's the next game.

• Starkel: Nick is a confident kid. Anyone who has played the sport has played a bad game. It's about how you get up, wipe the blood out of your nose and respond. He took some responsibility, too, last night, and I did the same. I told him it wasn't all on him. I could have been better.

• A&M is giving up 20 points per game, and considering who they've played, that's pretty good. They do a really good job and have a good scheme. They're going to be a big challenge for us. Looking back on last year, we settled in and did a few good things. It's about starting fast and finishing strong. No. 1, their MIKE, runs well and reminds me of Devin White, who played at LSU. They have a lot of length at corner. No. 9 reminds you of Earl Thomas with the way he runs through the alley. We're looking forward to responding this week.

• On the OL: I think they played well against Colorado State and not so well the other night. I don't know what it was. That's something you'll have to ask them. We felt like CSU's line was better than San Jose State's.