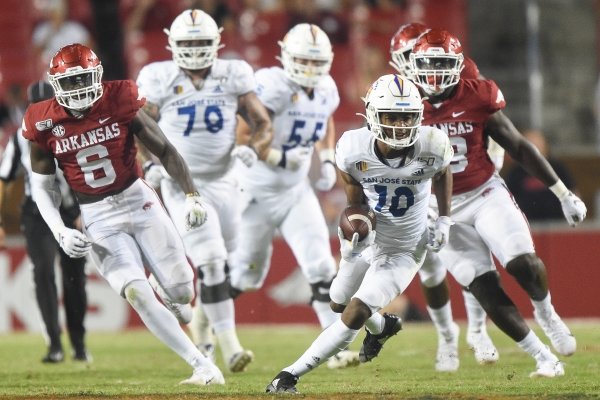 FAYETTEVILLE — In John Chavis' possession is a list of corrections geared toward improving Arkansas' defense following an uninspired performance against San Jose State on Saturday.

Chavis, in his second season with the Razorbacks, did not go into any detail about those objectives or the prescribed fixes Monday at his weekly press conference, but, based on his group's play against the Spartans, one is led to believe the list is comprehensive and not at all short.

San Jose State, which totaled 348 yards of offense in its previous game, a 34-16 loss to Tulsa on Sept. 7, ran up 503 yards on Arkansas in its 31-24 win over the weekend, including 402 through the air by a former walk-on quarterback. Chavis credited the Spartans for their gameplan and added, as he often does days after losses, that he would right the wrongs.

But, as of now, he doesn't have an answer.

"You know, we're sitting here through four ball games, and I'll be honest with you, it's a frustrating situation for our head coach to look at our defense," he said. "It's frustrating for me because we need to be playing better. We have to get it done in practice. You're not just going to walk out there and play better.

"We've got things we've got to get done in practice with a sense of urgency."

Razorbacks coach Chad Morris, following Saturday's game, said he didn't necessarily like his team's demeanor in pre-game warmups. He thought players were too loose, and he addressed that prior to kickoff, he noted Monday. Asked about his defense's attitude entering the game, if perhaps players overlooked the Spartans in any form or fashion, Chavis didn't particularly want to discuss the matter.

He did say, though, his unit could have competed better, harder and played with more discipline, which lacked in the first half and on the final series of the game when San Jose State marched 75 yards in five plays for the game-winning score.

"Maybe, maybe, and I'm just saying maybe, we were a little immature," he said. "I don't know. I don't know that for sure, but our kids have had great attitude. They prepared well last week. Certainly, we can sit here and make excuses, and I'm not going to make excuses. Heck, it's my responsibility. We're not going to go there."

After allowing 607 yards passing and 321 on the ground to Mountain West opponents over the last two weeks, Chavis admitted he hasn't slept well. But it isn't because he is afraid. His only fears are snakes and heights, he said. His long nights stem from attempting to pinpoint the active problems on his side of the ball.

"I want to help get this program where it needs to be," Chavis said. "And by God, we've got to have the sense of urgency to take it there. Where we are, we can't allow it to continue to go there. We've got to get it turned and we've got to play better. If you lose a game because somebody is better than you, OK.

"We don't like to lose. We hate to lose. But when you don't play well enough and you've got an opportunity (to win), it kind of grinds you a little bit."

One of the likely items on Chavis' list is a personnel assessment, a re-evaluation of which players deserve to be on the field. Last weekend, cornerback LaDarrius Bishop made his first career start in place of injured Montaric Brown, who is likely to return for Texas A&M, Morris said.

He did not commit to "drastic changes" being made, but said a shakeup in the lineup could be on the horizon.

"We're auditioning all the time," said Chavis, who noted a move from the field to the box in AT&T Stadium is a possibility. "We're not just going to sit there when it's not going good and not try to make it better."

Following Saturday's loss, Morris stated that Arkansas' lack of pressure from its front seven was concerning, adding that quarterback Josh Love had enough time in the pocket "to eat a sandwich and pick us apart underneath." The Razorbacks' defense was credited with only five quarterback hurries on Love's 49 pass attempts.

Senior defensive end Jamario Bell, in his first game back from a left knee injury, recorded the unit's lone sack in the game in the third quarter. Arkansas' top four defensive tackles - McTelvin Agim, TJ Smith, Jonathan Marshall, Isaiah Nichols - combined for only two tackles and did not once drop a Spartans player behind the line of scrimmage.

"They did a good job getting rid of the ball quickly. It's hard when it's not all, but a lot of quick game," Chavis said. "It's coming out quick and the receivers did a good job of running routes and getting open and getting the ball. We made some adjustments at halftime that made it a little bit better for us, but it wasn't enough. We just didn't play well enough. We didn't coach well enough.

"When I say we didn't play well enough, understand that's not on the players, that's on me. We've got to prepare and have them ready for every situation that can happen. We didn't do good enough job of that."