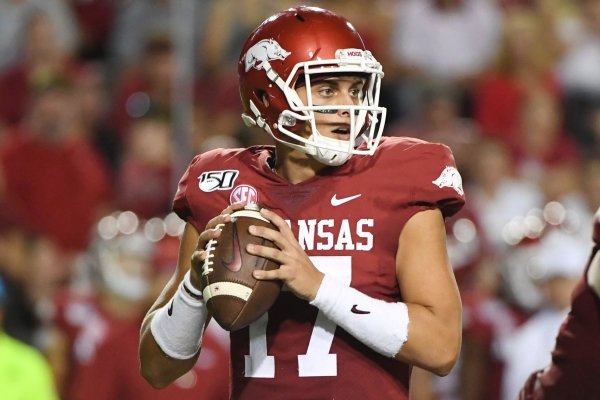 Each week throughout the 2019 season I plan to re-watch the previous week's game and chart each pass thrown by an Arkansas quarterback:

Analysis: Nick Starkel's second start with the Razorbacks is one he'll want to forget. The junior threw for 356 yards and three touchdowns, but was intercepted five times - three on throws 16-plus yards downfield. He has not been particularly accurate at that level of the field over the last two weeks, completing just 7 of 20 such passes. He was 3 of 12 at that depth against San Jose State, throwing a beautiful ball to Mike Woods for a 62-yard touchdown and another to Woods for a 40-yard gain in the fourth quarter. Aside from those completions, though, he was 1 of 10 for 18 yards. I charted Starkel with eight other inaccurate passes, mostly on deep balls, but he also missed easy throws like the would-be touchdown to Cheyenne O'Grady from eight yards out. Many of his misses, like his first pass of the game to Chase Harrell, sailed high of his target. Joe Craddock noted that this was the case because Starkel did not trust his protection or keep his base. In Starkel's defense, that is difficult to do when said protection breaks down as often as it did Saturday. I counted at least nine times in which Starkel was hit by a Spartans defender on a pass attempt. He also threw three passes that likely would have been picked off by SEC defensive backs. The strange issue of attempts being tipped at the line reared its head again. He saw three of his passes batted down against San Jose State, bringing his two-week total to six. Starkel simply pressed, tried to do too much and hit the 14-point play, Chad Morris said Monday. After a successful first start in Week 3, Starkel perhaps trusted his arm too much. Coaches have encouraged him to play within the system, and that is the plan this weekend against No. 23 Texas A&M, which owns the SEC's No. 2 pass defense. Aggies coach Jimbo Fisher said Wednesday he doesn't doubt Starkel will bounce back from his five-pick game last weekend. He also commended him for his resilience. Facing his former team for the first time, we'll see how it goes, but it's sure to be an emotionally charged game.