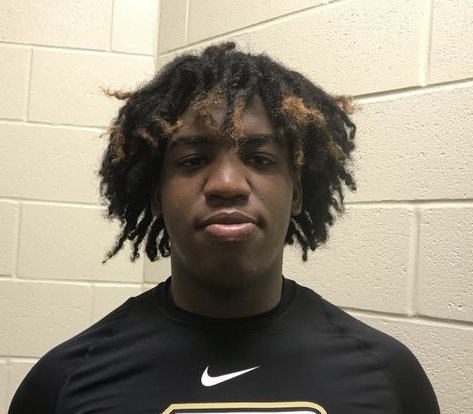 “I love it. It’s a blessing come true,” said Phillips of the Arkansas offer. “As soon as they told me, I was in the cafeteria eating lunch and I just started crying and called my mom. My mom loves Arkansas. She was so happy. She couldn’t wait to tell the family.”

Phillips, 6-7, 270 pounds, of Texarkana (Texas) Pleasant Grove, moved from Hope to his new school shortly before fall practice. He said his late uncle would’ve been proud of his offer.

“My uncle was a big role model to me and he loved Arkansas,” Phillips said.

“Unbelievable feet, great hands,” Gibson said. “Plays a little high right now and maybe not as physical as the other two, but raw the talent is unreal. The growth he’s had the past 5-6 weeks has been really, really good.”

“Great kid, really humble, doesn't have the big head,” Gibson said. “I asked him after he got the Arkansas offer if he could have any three schools in the nation offer him who would you want as No. 1 and he said Arkansas. So I was like, it’s pretty cool that you already have your dream school as an offer. He’s an Arkansas kid that loves Arkansas.”

“I like Arkansas so much. I think they played a good game,” he said. “I think it was a positive with me going to my first college game. I like them so much.”

Phillips said the Razorbacks fans stayed positive throughout the game.

“Even when they’re doing bad the fans still love them,” Phillips said. “They were saying, 'Please come to Arkansas. We need you.' It felt good. They showed me a lot of love and I like that.”