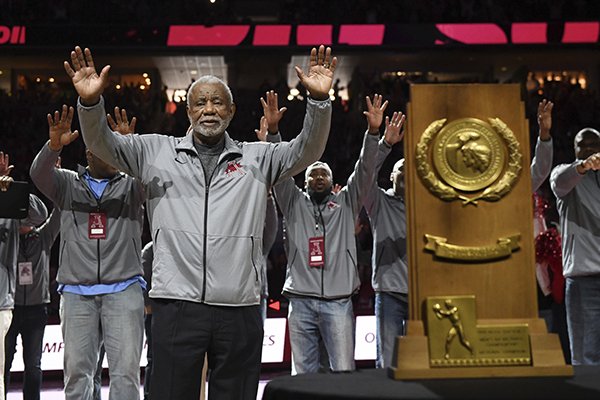 FAYETTEVILLE — The Arkansas Razorbacks will unveil a court with Nolan Richardson’s name during an exhibition game against Arkansas-Little Rock next month.

The exhibition between the Razorbacks and Trojans is scheduled for Sunday, Oct. 20, at 3 p.m. at Bud Walton Arena. It will be the first of two exhibitions for the Razorbacks, who are also scheduled to host Southwestern Oklahoma State on Friday, Oct. 25, at 7 p.m.

The University of Arkansas announced in March its plans for Nolan Richardson Court. Richardson won a school-record 389 games in 17 seasons as the Razorbacks’ head coach and in 1994 led the team to its first NCAA championship.

Richardson, who was the first black basketball coach for a major program in the South, was fired by the University of Arkansas in 2002 near the end of a season in which the Razorbacks finished with a 14-15 overall record.

In 2004, Richardson sued the university, multiple university leaders and the Razorback Foundation for wrongful termination, alleging discrimination in federal court. His lawsuit was dismissed, and the decision was upheld on appeal.

Richardson has since coached national teams in Mexico and Panama, and the WNBA team in Tulsa, but never moved away from Fayetteville. He reconciled with UA leaders in time for a 2009 ceremony honoring his national championship team and in recent years he has attended several Arkansas games, drawing loud ovations when shown on the arena video board.

There has been a groundswell of support in recent years to honor Richardson with a court naming, a practice that has become commonplace at many programs. In February 2018 the UA Associated Student Government submitted a recommendation to UA athletics director Hunter Yurachek for the court to be named for Richardson.

Yurachek did not make his own recommendation until more than a year later and the university’s board of trustees approved Yurachek’s recommendation during a March 28 meeting in Hot Springs.

The Razorbacks and Trojans received a waiver from the NCAA to play the exhibition game. Exhibition games typically do not include two NCAA Division I teams.

UALR, coached by former Arkansas All-America guard Darrell Walker, is coming off of a season in which it was 10-21 overall and 5-13 in the Sun Belt Conference. The Razorbacks and Trojans have never played in men’s basketball.

The Razorbacks are scheduled to begin preseason practice today and play their annual Red-White intrasquad scrimmage on Oct. 5 at Barnhill Arena.