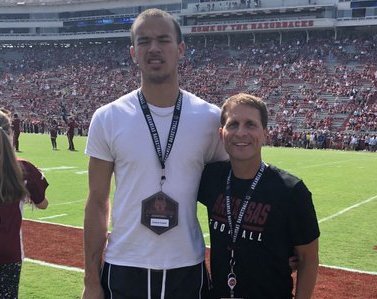 Powell 6-7, 225 pounds, played at DeSoto (Texas) as a sophomore and had transferred to Huntington (W. Va.) Prep to play there as a junior, but has decided to reenroll at DeSoto early next week. He chose the Hogs over scholarship offers from Ole Miss, SMU, St. Louis, TCU and Tulsa. He becomes the Hogs' first commitment for the 2021 class.

He and his father made an unofficial visit to Arkansas on Sept. 14. He admitted he was close to committing to the Hogs after receiving an offer during the trip.

He took his time before pledging to the Hogs.

"I took some time, I didn't want to make decision based on emotion," he said. "I wanted to make sure that was what I wanted to do."

"I could tell Coach Crutchfield was a real genuine coach right off the bat," Powell said."Then Coach Musselman's pro experience and the pro experience throughout the program from assistants up. Everybody has either put somebody in the pros, played in the pros or coached in the pros. So from a basketball standpoint, there's no better option. It's a no-brainer."

He averaged 22 points, 8 rebounds and 2 blocks as a sophomore. ESPN rates Powell a 4-star recruit and the No. 11 power forward in the nation for the 2021 class.

The Razorback fans had a major impact on him during the Colorado State football game.

"I can't stress enough how much the fan base... the fan base is crazy," Powell said. "Even at a non-conference football game the fan base was crazy. I can't wait to see what it's like for basketball."