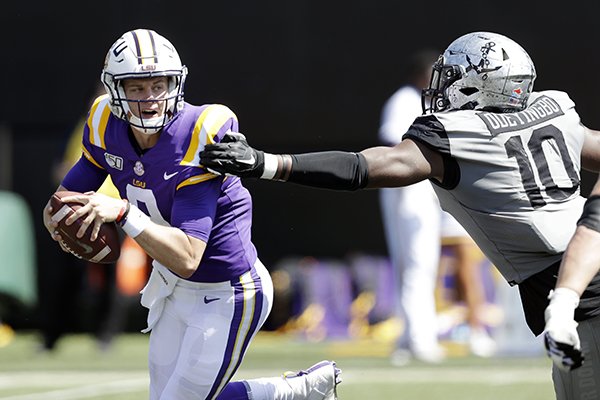 At this rate, the SEC might have to name its offensive player of the week award after Joe Burrow.

LSU's senior quarterback won the SEC offensive player of the week for the third time in four games after he completed 25 of 34 passes for 398 yards and 6 touchdowns in the Tigers' 66-38 victory at Vanderbilt.

"With Joe, I don't know if he even knows he was the SEC player of the week," LSU Coach Ed Orgeron said. "He is so in tune to his football team, and tough and into the fundamentals and wanting to get better."

Burrow, who also was SEC offensive player of the week for his games against Georgia Southern and Texas, has completed 100 of 124 passes (80.6%) for 1,520 yards and 17 touchdowns with 2 interceptions.

"I do believe that Joe could be in the Heisman race at the end of the season with the great season that we can have," said Orgeron, whose Tigers are 4-0 and ranked No. 4 nationally. "I think he's that type of player.

"I've been around a lot of Heisman Trophy winners, and I believe that Joe needs to be mentioned [as a candidate], and perhaps he can win it."

In case you're wondering who was the SEC offensive player of the week when Burrow didn't win, it was Alabama junior quarterback Tua Tagovailoa who won it in the third week when he had 444 passing yards against South Carolina.

Missouri wide receiver Jonathan Nance, a graduate transfer from Arkansas, is off to a good start with the Tigers.

Nance, who decided to quit at Arkansas after four games last season to preserve a redshirt season, has 9 catches for 144 yards and 2 touchdowns through four games as a starter.

"He's done a great job," Missouri Coach Barry Odom said. "He's been productive. He's been a great guy in the locker room. He's been a tremendous teammate, and he practices really hard.

"His habits are aligning with what we want to see to be able to go play effectively on game days."

Odom said Nance has done a good job of blocking and running routes even when he's not the primary receiver.

"The mark at that position is how does he play when he doesn't have the ball in his hands?" Odom said. "And his effort level is really good. I'm proud of his progress and the things he's done for our program."

Rodriguez was set to replace Mike Shula as the Crimson Tide's coach, but he had a change of heart and stayed at West Virginia for another season before taking the Michigan job.

"I just wonder with all the national championships they've won in the last 13 or 14 years ... I should get a little bit of credit," Rodriguez jokingly told reporters this week with Ole Miss playing at Alabama on Saturday. "There's no mention at all of my responsibility in helping them win all those championships."

After the attempt to hire Rodriguez failed, Alabama turned to Nick Saban, who left the NFL's Miami Dolphins and has led the Tide to five national championships.

"Everybody asks, 'Do you have regrets?' and I think every coach at some point in their career has regrets that they look back on, decisions that they made, that they think twice about," Rodriguez said of not going to Alabama. "I've had great experiences since then. I'm blessed to be here. I'm grateful to have this opportunity."

Auburn Coach Gus Malzahn is known for calling trick plays, and Tulane ran a version of the "Woody" to beat Houston 38-31 last week.

It appeared the Green Wave would play for overtime with the game tied and 16 seconds left when quarterback Justin McMillan lined up as if he would take a knee.

But after the ball was snapped, McMillan faked to his right, hid the ball and handed off to Amare Jones, who ran for 18 yards, setting up McMillan's 53-yard touchdown pass to Jalen McCleskey on the next play.

"Woody" first came to national prominence in 2006 when Malzahn was Arkansas' offensive coordinator and called it in the Razorbacks' 27-10 victory at No. 2 Auburn.

Arkansas 5-7 receiver Reggie Fish hid behind the offensive linemen and took a handoff after quarterback Mitch Mustain had faked to Felix Jones.

Fish slipped out unnoticed and ran for 28 yards to the Auburn 6, setting up a touchdown that pushed the Razorbacks' lead to 24-10 with 4:54 left in the third quarter.

The play completely fooled the Tigers and Will Muschamp, the current South Carolina coach who at the time was Auburn's defensive coordinator.

After being fired as Florida's coach, Muschamp returned to Auburn in 2015 to be Malzahn's defensive coordinator.

"That's something we haven't seen," Muschamp said after the 2006 Arkansas-Auburn game. "We were in regular defense and the kids got a little confused."

Malzahn has continued to run versions of "Woody," which is named after Chris Wood, who is now Springdale Har-Ber's coach and was an assistant for Malzahn at Shiloh Christian.

"The original 'Woody' was with Chris Wood back at Shiloh Christian in the '90s," Malzahn said. " 'Woody' was his play way back when."

Alabama receivers Jerry Jeudy and DeVonta Smith were captured on camera playing rock, paper, scissors before a play in the Crimson Tide's 49-7 victory over Southern Mississippi on Saturday.

Tide receiver Henry Ruggs -- among the Alabama players available for interviews Monday -- said playing rock, paper, scissors is a way of determining which receiver gets to line up on certain calls.

"We have playmakers everywhere and at any moment, any guy can make a play," Ruggs said, according to AL.com. "So once they got the play call, they knew, 'Oh, this is the route that is going to catch the touchdown.' So they rock, paper, scissored over who was going to run that route."

The play ended up being a pass for a 25-yard gain to Jaylen Waddle, which set up a touchdown.

"We all know every position, so at any moment, we can move around," Ruggs said. "I can go in the slot or go outside. So if [the receivers] see a big route coming, everybody wants it, so they just did rock, paper, scissors to see who was going to run it."

"That's the first I ever heard of it," Saban said. "I don't know where you read it or who put it out there. It may be right, may be wrong. I have no idea."

Having extra time to get ready for games hasn't worked out well for Missouri Coach Barry Odom.

When Wyoming beat the Tigers 37-31 to open this season, it dropped Missouri's record to 1-7 under Odom when they have more than a week to prepare for a game.

That includes an 0-3 record after open dates with losses at Florida, Kentucky and South Carolina; bowl losses to Texas and Oklahoma State the previous two seasons; and a 1-2 mark in season openers, including a loss at West Virginia in 2016 in Odom's first game as Missouri's coach. Missouri beat Missouri State 72-43 in last year's season opener.

With Missouri having an open date before playing Troy on Oct. 5, Odom has taken a different approach to this week.

Instead of giving the players extra time and having the coaching staff go out to recruit, Odom has treated it as more of a game week. The coaches aren't going recruiting until Friday to watch high school games.

The idea is to maintain the momentum from a three-game winning streak, including a 31-14 victory over South Carolina on Saturday.

"We've stayed in-house, and it's been full steam ahead trying to get our team ready to go play our best," Odom said. "We're coming off a big win against South Carolina, and we've done some really good things, but we've also had the urgency of being in the moment of right here, right now."

• In the past two seasons, Alabama has outscored Ole Miss by a combined score of 128-10.

• LSU's 66-38 victory at Vanderbilt marked the most points the Tigers had scored in an SEC regulation game. LSU's previous high had been a 63-28 victory against Kentucky in 1997.

• South Carolina has lost five consecutive games to Kentucky after the Gamecocks beat the Wildcats 13 of 14 times from 2000 through 2013.

Mississippi State junior running back Kylin Hill is leading the SEC in rushing with an average of 137.8 yards per game. He has 91 carries for 551 yards with 5 touchdowns through the first four games, and has rushed for more than 100 yards against all four opponents.

But getting a fifth consecutive 100-yard rushing game figures to be a major challenge Saturday when the Bulldogs play Auburn. The Tigers have one of the nation's top defensive fronts, and they've held their first four opponents to an average of 89.5 rushing yards. Texas A&M had just 56 rushing yards on 21 attempts against Auburn last week.

Mississippi State at No. 7 Auburn

Auburn (4-0, 1-0 SEC) is playing Mississippi State (3-1, 1-0) at home after a big road victory — 28-20 at Texas A&M — and before taking on No. 9 Florida in the Swamp on Oct. 5. That scheduling makes the Bulldogs an especially dangerous opponent. Mississippi State, a 10-point underdog, is good enough to upset Auburn if the Tigers suffer any type of letdown or are looking ahead to a matchup with the Gators. Considering Mississippi State beat Auburn 23-9 last season, the Bulldogs should have the Tigers’ full attention.

Ole Miss at No. 2 Alabama

Towson at No. 9 Florida

2003 -- Last season Tennessee won at Florida, when the Vols beat the Gators 24-10 in the Swamp. Since then, Florida is 8-0 at home against Tennessee.

"I guarantee you, they're the best 1-3 team in the country, no doubt about that. They're a talented group. They've got very good players."

"We needed a little bit of adversity. We got it. This was good."