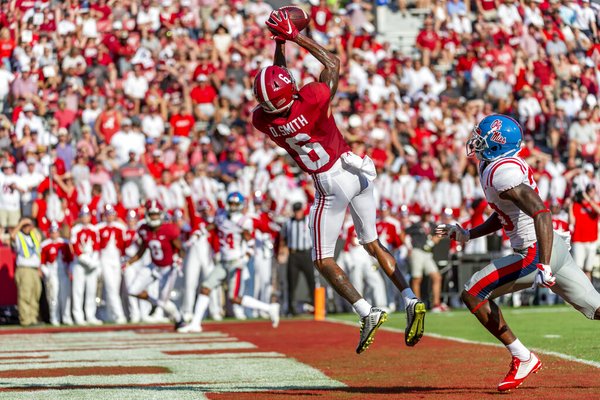 Alabama wide receiver DeVonta Smith (6) leaps into the air for his fourth touchdown reception well ahead of coverage from Mississippi defensive back Keidron Smith (20) during the first half of an NCAA college football game, Saturday, Sept. 28, 2019, in Tuscaloosa, Ala.

NASHVILLE, Tenn. — Ke'Shawn Vaughn rushed for 138 yards and one touchdown, Riley Neal threw for 189 yards and a touchdown and Vanderbilt defeated Northern Illinois 24-18.

The victory was the first of the season for the Commodores (1-3), who dropped their first three games to Power Five teams, two of which came against Top Five ranked opponents No. 3 Georgia and No. 4 LSU.

On Vanderbilt's opening drive, Brooks broke loose for a 61-yard touchdown run, the freshman's first of the season. He had only one more carry of the game. Entering Saturday, Brooks had just eight carries for a total of seven yards in two games this season.

The Huskies pulled to within four in the third quarter after posting points on their first two drives of the second half. John Richardson kicked a 39-yard field goal to get Northern Illinois on the scoreboard, and then Mitchell Brinkman had a 38-yard touchdown reception. But Vanderbilt answered right back 1:49 later when Neal found Kalija Lipscomb with a 38-yard touchdown pass.

Vanderbilt improved its record to 8-2 against Mid-American Conference opponents, including 4-0 against Northern Illinois.

Early in the fourth, the Huskies cut the deficit to six following a one-yard touchdown run by Marcus Jones and a two-point conversion reception by Brinkman, but the Commodore defense denied the Huskies on their final drive, and the Vanderbilt offense was able to run out the remaining three minutes to seal the victory.

Northern Illinois: After not allowing a 100-yard rusher in 17-straight games, the Huskies allowed an opponent to eclipse the century mark for the second consecutive game. Vanderbilt's Vaughn rushed for 138 yards on 17 carries and one touchdown. In Northern Illinois last game Sept. 14, Nebraska's Dedrick Mills ran for 116 yards on 11 carries.

Vanderbilt: In their three losses to open the season, the Commodores allowed an average of 46 points to Georgia, Purdue and LSU. After not allowing any points in the first half, Northern Illinois recorded a field goal and a touchdown on their first two possessions of the second half. The Commodores allowed the Huskies to convert just four of 13 third down opportunities in the game.

TUSCALOOSA, Ala. — Tua Tagovailoa and DeVonta Smith hooked up for five touchdown passes and a few school records while No. 2 Alabama ran away from Mississippi 59-31 on Saturday.

The Crimson Tide (5-0, 2-0 Southeastern Conference) actually trailed for the first time this season before flexing its muscles against the 37 1/2-point underdogs. The Rebels (2-3, 1-1) couldn't even slow down Smith, who sometimes gets overshadowed in a loaded receiving group.

Not this game. Smith had 11 catches for school records of 274 yards and five TDs, all by early in the third quarter. He had 221 yards by halftime, and added a 27-yard score to punctuate the biggest game of any Tide receiver.

Tagovailoa passed for a school-record six touchdowns and rushed for a seventh. He had matched the record of five TD passes in two straight games but finally eclipsed it in the fourth quarter.

It wasn't all smooth sailing for the Tide, even with a blocked punt for a touchdown tossed in.

Ole Miss turned a muffed punt into a score and then took a 10-7 lead on Luke Logan's 33-yard field goal. Alabama's first deficit of the season lasted 3: 44.

Then Alabama scored 31 points in the second quarter.

Plumlee passed for two touchdowns and ran for a third. He finished 10-of-28 passing for 141 yards with an interception, and ran 25 times for 109 yards.

Tagovailoa's touchdown run in the second quarter was the 81st TD passing and rushing of his career, passing AJ McCarron for the school record. He also ultimately tied McCarron's 77 scoring passes.

Former starting kicker Joseph Bulovas replaced an injured Will Reichard (hip flexor). Bulovas made a 36-yard field goal and hit the right upright on a 28-yarder.

Mississippi: Rebounded from a tough loss to Cal by starting 4 of 5 on third-down conversions. Had 476 total yards and 279 on the ground against the Tide.

Alabama: Had some struggles defensively but the offense produced even more big plays than usual. Ale Kaho both blocked and recovered the punt for a touchdown.

Alabama gets its first open date before visiting No. 23 Texas A&M on Oct. 12.

GAINESVILLE, Fla. — Kyle Trask threw for two touchdowns and ran for another, helping No. 9 Florida beat lower-division Towson 38-0 Saturday and extend its winning streak to nine.

Trask set a school record in the process. The junior making his second collegiate start completed 15 consecutive passes to open the game, giving him 18 straight completions and breaking Chris Leak's mark (17) set against Wyoming in 2005.

Trask's hot streak ended with an incompletion to Jacob Copeland early in the third quarter. He responded with a perfect throw to Kyle Pitts in the corner of the end zone for his second TD pass of the afternoon.

Trask finished 18-of-20 passing for 188 yards, giving way to Emory Jones in the fourth quarter. Trask showed progress by not having any turnovers. He threw two interceptions and lost a fumble in his first start , against Tennessee.

He was considerably more efficient, as expected, against the overmatched Tigers (3-2).

The Gators (5-0) need it to continue as they begin a daunting October against seventh-ranked Auburn next week.

Although Florida won the game and covered the 35 1/2-point spread, it also struggled to run the ball early. Coach Dan Mullen's team mustered 60 yards on 16 carries in the first half.

Towson moved the ball well, meanwhile, ending its first two drives with a fumble and a missed field goal.

The Gators led 17-0 at halftime, the same score they had against fellow Football Championship Subdivision team Tennessee-Martin earlier this month. And just like the first one, Florida played better after the break.

Towson continued to help. Tom Flacco, a younger brother of Denver Broncos quarterback Joe Flacco, threw interceptions on his first two drives of the third quarter. Donovan Stiner got the first one, and Jon Greenard the second.

Flacco completed 16 of 27 passes for 157 yards, with two interceptions. He was sacked four times and involved in a fumble. Freshman Jaydon Hill also dropped an interception that he surely would have returned for a touchdown in the first half.

Towson: Fell to 0-2 against Southeastern Conference teams but held its own in both games. The Tigers lost 38-22 at then-No. 3 LSU in 2012, a game in which Odell Beckham Jr. caught five passes for 128 yards and two touchdowns. They trailed Florida 17-0 at halftime and botched two scoring chances early.

Florida: Clearly has issues along the offensive line, which could prove problematic against the more dangerous Tigers: Auburn and LSU. Auburn's dynamic duo of Derrick Brown and Marlon Davidson will provide the first test.

Florida should remain in the top 10 for the fourth consecutive week. Moving up will require beating more Tigers: first Auburn and then LSU.

The Gators held out two defensive starters — cornerback CJ Henderson and defensive end Jabari Zuniga — who probably could have played. Both are recovering from ankle sprains. Henderson missed his third straight game. Zuniga has sat out the last two.

Towson gets a week off before hosting Colonial Athletic Association foe Albany on Oct. 12.

Florida begins the toughest part of its schedule by hosting Auburn next Saturday. The Tigers have won all three meetings since the schools stopped playing annually in 2003.