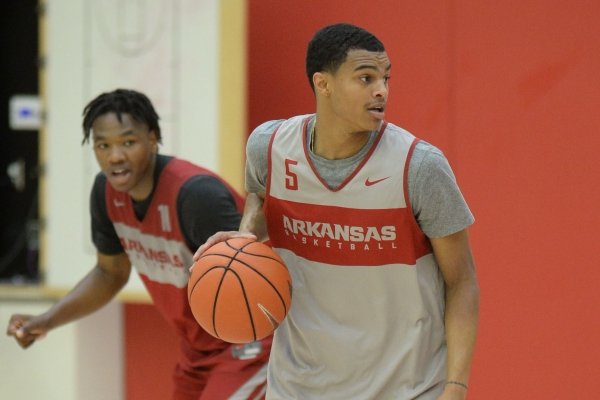 FAYETTEVILLE — There was one glaring weakness in Arkansas guard Jalen Harris' game in his first season with the Razorbacks.

Coming off a redshirt year after transferring from New Mexico, Harris, who started all 34 of Arkansas' games in 2018-19, struggled mightily with his jumpshot, particularly from 3-point range.

He finished 5 of 39 (12.8 percent) beyond the arc on the left side of the floor, 0 of 8 between the elbows and 3 of 15 on the right side of the floor, according to shot chart data collected throughout the season with the exception of the Texas-San Antonio game in North Little Rock.

Harris, whose final 3-point make came in Arkansas' 90-89 win at LSU on Feb. 2, came to grips with his deficiency from distance and, by all accounts, carried a serious approach into the offseason geared toward becoming more of a viable threat on the perimeter.

According to coach Eric Musselman, Harris was among a handful of players, including Isaiah Joe, Desi Sills and Jeantal Cylla, who made up the Breakfast Club, a group dedicated to consistently putting up hundreds of shots in the early morning hours.

"I come in every morning at 6-7 a.m. with (graduate assistant) Max (Pendery) and get a lot of shots up before weights, then get in the weight room," Harris said Sept. 26 at Arkansas' annual media day. "Then I come back later on in the day, so I worked on it real hard. It's been real big.

"During the summer when we were off I was in here with (graduate assistant) Velton (Kennedy) and Trey (Thompson), so that was real big, too."

Even amid his shortcomings shooting the ball last season, Harris knew his jumper needed a few corrections, but he did not want to tweak too much for fear of getting in his own head. But not long after assistant coach Corey Williams arrived on campus, he offered a bit of advice, a mechanical tip, that has proven beneficial.

"He told me I was leaning back on it," said Harris, who erased 83 percent of his positive scoring value shooting 3-pointers last season, according to HoopLens analytics. "So my whole thing is trying to stay straight up in my shot. That's been a real big improvement. I have a lot more confidence than I did last year."

Musselman, when asked last Tuesday about Harris' efforts to improve his shot, said the junior looks "really good" when shooting on his own. Trusting the motion and release can be a challenge mentally.

"He’s been getting in reps. I feel like his confidence is growing," Musselman added. "Having said that, now I think any time with any upperclassman it comes down to … whether you’re a baseball hitter, you get in grooves or get in slumps. I think with J5, it’s really just getting him into a game and him knocking down a couple 3s and then what we see behind closed doors.

"Hopefully he’ll shoot the ball at a much higher rate this year."

Attempting to right his shooting woes wasn't the only item on his offseason to-do list, though.

Listed at 164 pounds on Arkansas' 2018-19 roster, Harris has added 12-13 healthy pounds since March thanks to methodical training with head strength and conditioning coach Dave Richardson, who is entering his second full season with the Razorbacks.

Richardson pushed Harris to limits he had not experienced before in their 45-plus minute sessions, the guard noted. And Richardson has been adamant about nutrition as well. Harris, a big fan of team nutritionist Kristin Jakus' peanut butter and jelly sandwiches, is subject to extra running if he fails to fuel up at breakfast each day.

"He has been real tough on me," Harris said. "Going in there, having my mind right with him and knowing that we're going to do a lot of circuits that get me stronger and (help me) stay on balance when I get hit going to the hole. Coach Rich has been a big part of my offseason."

Taking care of his body has provided added stamina for Musselman's detailed, fast-paced practices, which feature plenty of timed shooting drills, defensive work and late-game scenarios that require players to be mentally sharp.

Harris added, too, that the Razorbacks will be more structured this season on the offensive end. He estimated Musselman has implemented upwards of 50 plays to this point. Retention is a work in progress, he joked.

"I feel like that's going to be a big part of us this year, knowing last year when it wasn't going (well) we didn't really have plays to get into," Harris said. "Now, if we're not (getting anything) going we can just run a play, and I think we'll get right back on track."