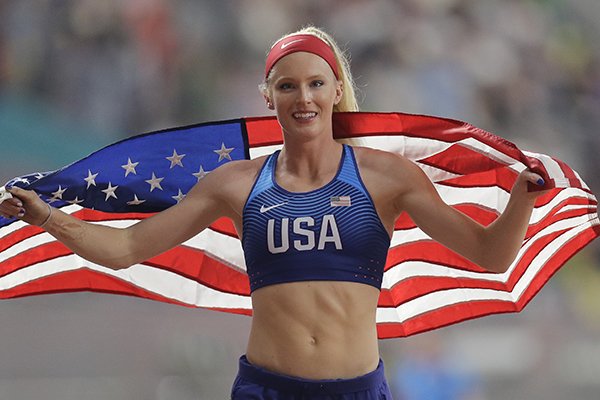 Sandi Morris, an NCAA champion for the University of Arkansas who lives and trains in Fayetteville, cleared 16 feet, 1 inch to finish second in the pole vault in the World Outdoor Championships on Sunday on Doha, Qatar.

Anzheilka Sidorova, a Russian who is competing unattached because of her country’s international ban from athletics, cleared 16-3 on her third and final attempt to win the gold medal and edge Morris.

Morris, the American record-holder at 16-3, cleared her season-best height after undergoing ankle and toe surgeries in the last year.

Morris, speaking to the media with an American flag drapped around her shoulders, said she was determined to have fun on Sunday after working to come back from injuries.

“When I went out there I said, ‘No matter what, I’m going to walk away happy,’ “ she said. “So I was being my usual self, goofing off in warmups, smiling, being bubbly.

“I jump so much better when I’m having a good time and so that’s exactly what I did. I gave everything I had. I can’t ask anymore for myself.

“This meet for me was about just getting that edge back and being Sandi again.”

“I had three really good attempts,” she said. “But [Sidorova] just just got me on that last attempt.”

Morris, 27, won her fifth medal in world competition. She won the gold medal at the 2018 World Indoor Championships and also won silver medals at the 2016 Olympics, 2016 World Indoors and 2017 World Outdoors.

As an Arkansas senior in 2015, Morris won the NCAA Indoor title. She also is a four-time U.S. champion.