Not all losses equal for Hogs 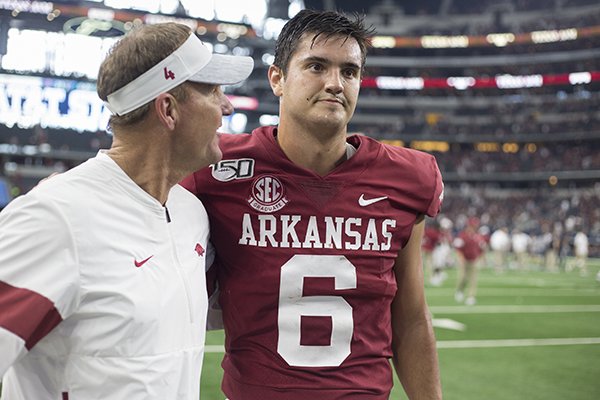 ARLINGTON, Texas -- The University of Arkansas has suffered back-to-back losses to San Jose State and Texas A&M, but the losses hardly look the same.

Arkansas fought the No. 23 Aggies to the final seconds before Texas A&M got a fourth-down stop at its 19 to hang on for a 31-27 victory on Saturday at AT&T Stadium.

San Jose State came into its game at Arkansas as a 20-point underdog because of a 4-23 record since 2017, but the Spartans went home with their first victory over an SEC team in seven tries, along with a $1.5 million guarantee.

Instead of dwelling on the embarrassing loss, the Razorbacks played an inspired game against Texas A&M

Coach Chad Morris said after the San Jose State game that he could sense in warmups that some of the Razorbacks were still "giddy" about their 55-34 victory over Colorado State.

"We have the same guys in the locker room. I think we have the same work ethic," Arkansas quarterback Ben Hicks said after the Texas A&M game when asked to explain how the Razorbacks could play so differently in back-to-back weeks. "I think after beating Colorado State we started reading our press clippings a little bit, and it came back to bite us in the butt against San Jose State.

"But the guys responded extremely well this week. We had a great week of practice and really got after it."

Hicks came off the bench to pass for 188 yards against Texas A&M after starting quarterback Nick Starkel was sidelined by an arm injury.

"You can appreciate the guys, how much they fought and how bad we wanted it," Hicks said. "It kind of breaks my heart to see our guys be so down, but we'll find a way to get it right and get it done."

Arkansas lost its 13th consecutive SEC game and fell to 0-10 in conference games under Morris.

"We knew it was going to be a four-quarter game, and that's what we ask for," Morris said. "But losing is not acceptable. There are no moral [victories].

"We've got to find a way to win when you get down to the end like this. And we will."

After the Razorbacks lost to San Jose State, Morris said how the team prepared for Texas A&M would be a gut-check for the coaches and players.

"I thought that this was a pivotal week for our football team," Morris said. "We all knew that the performance last week was unacceptable.

"How we responded was the only thing that matters, and why we got the results that we did. And so there was a lot of challenging going on this week among each other, challenging each other to really, really lock in and focus in and just do what we do."

Morris said the Razorbacks were locked in all week.

"We've got to continue to keep coaching hard and continue to put these young men in situations to be successful, and that's what we're going to do," Morris said. "We're going to go back to work."

Senior tight end Cheyenne O'Grady, who had career highs of eight receptions and 91 yards, said the Razorbacks were highly motivated after their loss to San Jose State.

"Everybody just sat down and said, 'That's enough, man. We've got to show everybody what we're capable of doing,' " O'Grady said. "Even after [challenging Texas A&M] there's a bunch of stuff we've got to fix, but we came out to play."

Junior safety Kamren Curl, who had a career-high 12 tackles, said he believes the Razorbacks opened some eyes against Texas A&M to how good they can play.

"We just have to keep going and show who we are every week," Curl said. "I feel like playing the way we did is going to help us win some games."

Arkansas has an open date, then will resume SEC play at Kentucky (2-3, 0-3) on Oct. 12. The Wildcats, who lost 24-7 at South Carolina on Saturday night, also have an open date this week.

"I know guys are going to be itching to get back out there and play Kentucky in a couple weeks," Hicks said. "We'll go back and watch the film and get after it on the bye week."

Morris said the open date comes at a good time after the grind of training camp and playing the first five games.

"I think these guys need a mental break for just a couple of days and to step back physically," Morris said. "Let's get healthy as we go into playing [six] more conference games."