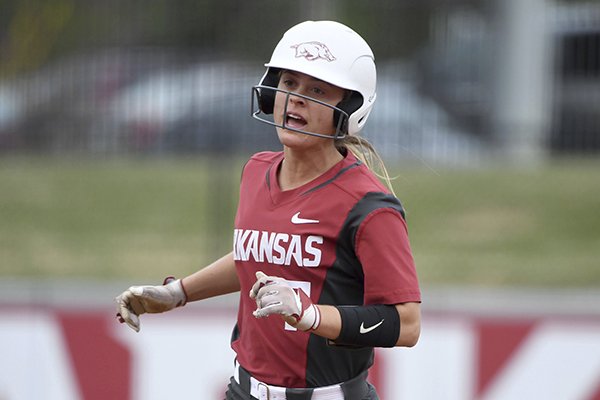 Arkansas' Sydney Parr advances to third base against Arkansas-Pine Bluff during an NCAA softball game on Tuesday, April 16, 2019 in Fayetteville. (AP Photo/Michael Woods)

Sydney Parr and Braxton Burnside still are adjusting to being off the field at a time when they normally would be in the middle of their softball seasons.

The University of Arkansas players are not accustomed to being away from the chatter of teammates as the calendar moves into spring, but the coronavirus pandemic has changed everything.

"As athletes, we have been wired for so long to have these extremely busy schedules from the weight room to class to practice to putting in extra work," said Parr, a senior from North Little Rock. "So I'm not going to lie, the first week at home was an adjustment. I was like, 'Oh my gosh, I'm not used to this.' "

After the initial shock, they have come to grips with the decision and understand the significance of social distancing, but it hasn't made it easier, Burnside said.

"I think most of all, it was just shock because I didn't think or imagine it having the impact that it did," the junior from Paragould said. "We found out that we were going to play without fans. Then we found out the season was going to be suspended for a while, and all of the sudden people were just dying. Honestly, I didn't have time to take it in and put it in perspective. The first thing that happened I was shocked, and the next thing happened and it just got worse and worse.

"To be honest, I'm still at the point where it doesn't really sink in that this year is over. All of these pretty days we're having outside, it feels so weird that I'm home in March and April when I should be on the softball field."

The cancellation of springs sports robbed collegiate seniors of what would have been their final season.

[Video not showing up above? Click here to watch » https://www.youtube.com/watch?v=w-plHmh-2n4]

Burnside now could have two seasons of eligibility, and Parr has the option to return for one season.

Arkansas softball Coach Courtney Deifel said she expects all six seniors to return next season, which could mean a 28-player roster next season.

"We're still waiting to hear all the details on how all of that is going to unfold," Deifel said of the NCAA eligibility rule, "but just more than anything, I'm happy with the decision because it gives all of our student-athletes a choice more than anything.

"I'm excited to get another year with our seniors. As of right now, they all want to come back."

Burnside will return next season, but she has not made a decision beyond that.

"To be honest, I have not put that much thought into it because I'm trying to take it day by day," she said. "This next year would be my fifth year, and then that extra year of eligibility would be my sixth year, so that's a decision I don't have to make right now. That's a decision I'm just going to kind of let come to me. I think if I made that decision right now, I'd be trying to see too far into the future."

Deifel said she could have nine pitchers on the roster next season if everyone returns, coupled with the incoming recruiting class. She admits roster management might be a challenge, but it's one she said is preferable to the players losing a season.

There is also the issue of scholarship restraints. Under NCAA rules, there are 12 scholarships to divide among the roster. A 28-player roster and no change to the scholarship limit could create difficulties, Deifel said.

"Being completely honest, this changes everything," she said. "When we set out to map out our recruiting, we're expecting this freshman class to replace the senior class, not play with the senior class. So there are different things we're going to have to work through.

"We have four pitchers in this freshman class, and only one is a pitcher-only; the other three play positions and pitch. So with keeping Autumn [Storms] and hopefully Lauren Graves as well, we'll have nine pitchers on our staff next year. So that's something we'll have to work through."

Burnside and Parr are adjusting to the new normal of working out at home while taking online classes for the remainder of the spring semester.

"To be honest, it's weird that I'm home and not playing softball and I'm still in school, so it's like I'm staying in a routine of getting up, doing some schoolwork," Burnside said. "I'm working out every day, hitting every day, throwing every day, just trying to stay in the swing of things."

Both players have been involved in the sport for years, starting as youngsters in travel ball. Having the season end in the manner in which it did has flipped their life upside-down, Parr said.

"It is terrible sitting at home during this time because for as long as I can think back, I would be playing softball during this time," said said. "Right now, we're supposed to be putting on our uniforms taking on Tulsa in a midweek game. To not be out on the field and to not be competing with my team and against another team, it's heartbreaking. It's not fun to think about."