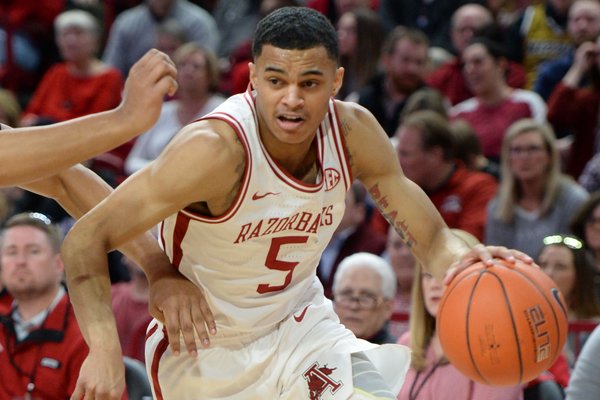 Jalen Harris drives to the basket on Friday, Feb. 21, 2020, during the second half of a game between the Razorbacks and the Missouri Tigers in Bud Walton Arena in Fayetteville. Harris has decided to transfer from the Razorbacks basketball team.

FAYETTEVILLE — Jalen Harris, who played the last two seasons at Arkansas, is transferring to Georgetown, according to a picture he posted on his Twitter account.

Harris, a 6-2 guard, is dribbling a basketball and wearing a Georgetown uniform with his signature and “Georgetown Hoyas” in the background with the tweet, “New beginnings! @GeorgetownHoops.”

Harris, from Wilson, N.C., will be immediately eligible at Georgetown as a senior graduate transfer.

Harris redshirted at Arkansas during the 2017-18 season after transferring from New Mexico. He announced on March 24 he was entering the NCAA transfer portal.