Musselman puts himself out there 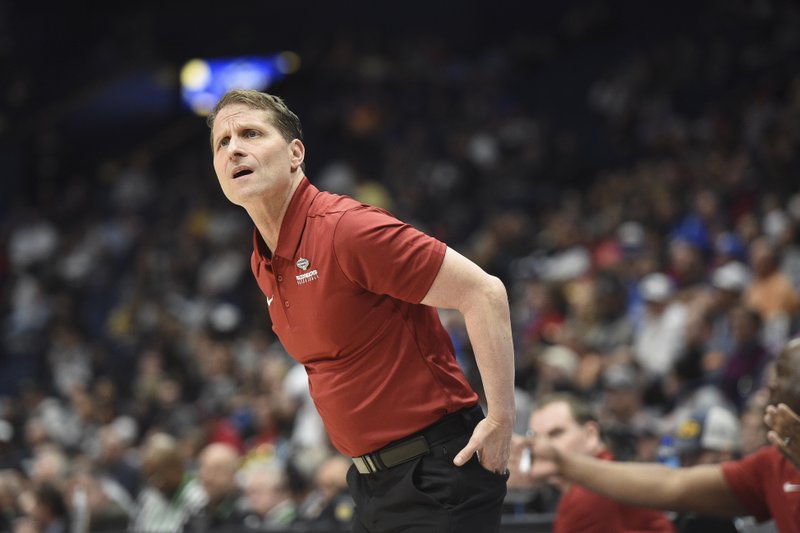 When contacting the numerous basketball transfers that have been mentioned with Arkansas lately, many of them have talked about how creative the Razorback coaching staff has been during the covid-19 pandemic.

With prospects unable to visit campus now, Arkansas is displaying its program the best way it can according to Razorback director of recruiting Michael Musselman.

After starting 21 games for UConn as a true freshman, Jackson averaged 12.2 points and 6.2 rebounds the last two seasons for New Mexico and has hit 157 3-pointers in his career.

It’s easier for acquisitions like this to happen when head coach Eric Musselman, who doubles as Michael’s dad, is so willing to put himself out there.

The head coach has done several videos of himself in an empty gym, an empty press room and even a practice with no players that have gotten to the social media world and on outlets such as ESPN’s SportsCenter, Bleacher Report, Barstool Sports and others.

“It definitely helps,” Mussel-man said. “In between the lines, he is straight-edged and there is discipline and there is a place for everything and everyone knows their role, but when he is outside of that, he is really fun and interesting to be around.

“The crazy part is that he really comes up with most of this stuff. But when he doesn’t come up with it, he is still willing to step out of his comfort zone and take a chance on things that might come off as silly or other coaches wouldn’t necessarily do that.”

It is part of a calculated effort to build a brand that is inviting to prospects.

“His willingness to put himself out there and to put our program out there has kind of created our brand and shows that it is a fun time to be playing at Arkansas,” Musselman said. “We want to get across we are not just here for basketball, but we want you to enjoy being here and it will be the best four or five years of your life.

“When it is time for business, we get down to business, but then we want to have fun and I think is a huge advantage for us.”

Arkansas has been on the list of some 30-plus graduate or regular transfers, seemingly just minutes after they get into the transfer portal.

“We pride ourselves on being among the first to get in contact with the players in the portal,” Musselman said.

“It’s really just like a database and you can refresh the page,” Musselman said. “There are four or five of us that keep up with it and when someone pops in there, usually late at night or early in the morning, we start doing our research and work to get a phone number, get in touch with the people around them, check them out and see if we want to move forward.”

Once Arkansas makes contact, there is a concerted effort to evaluate.

“We start by explaining the role that you can fit in with us and kind of compare and contrast with ‘this is the role you played at your last school,” Musselman said. We ask what role are you looking for and see if that kind of matches up.”

Several schools are taking their recruits on virtual tours of their campus.

“Everybody is kind of tossing out this phrase virtual tour, but there really isn’t an industry standard what to do or what it is,” Musselman said.

“I have studied a lot of the football programs like ours, Kansas and Minnesota because (head coach) PJ Fleck is so ahead of his time on things like this even before the pandemic came around. How we do it is probably different than how everybody else does it.

“I know that some people have like a tour of campus and then play it on Zoom, a virtual tour where they are explaining what you are looking at on video. We don’t necessarily do that.”

Instead, Arkansas tries to make it more of an interactive event. Musselman says the Hogs were fortunate to get so many 2020 and 2021 prospects on campus this past summer, fall and winter.