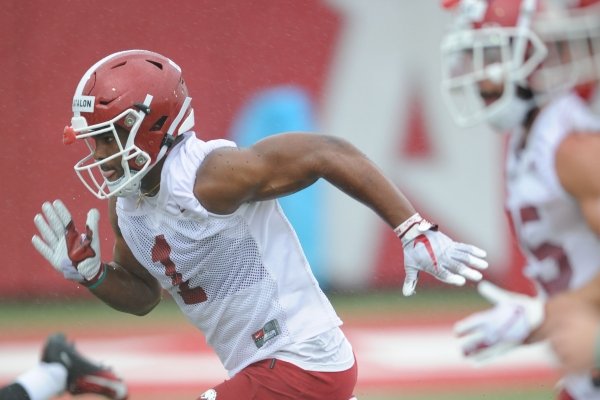 Arkansas defensive back Jalen Catalon runs Saturday, Aug. 3, 2019, during practice at the university practice field in Fayetteville. Visit nwad.com/photos to see more photographs from the practice.

FAYETTEVILLE — While Arkansas is not getting to have spring practice, Razorbacks players have seen enough to be excited about their new coaching staff.

Freshman safety Jalen Catalon (5-10, 198) has been impressed with the tone new coach Sam Pittman set from the beginning.

“It’s definitely a transition, but I think that’s what builds us so strong is you have the older guys who have been through it before to give us some guiding points and lead us through it all,” Catalon said on a Friday afternoon teleconference. “I think the staff came in and Coach Pittman did a really good job of just emphasizing what he’s about and making sure we understand that he loves every single person on the team.

“He wants every single person to be a part of this. There wasn’t no weeding out or nothing like that. He wanted to make sure he established the point on making sure we bond as a team and come together as one and make sure that everyone is in this together, so it’s been a great transition.”

Catalon is also impressed with Arkansas’ strength and conditioning staff and how the new virtual instruction allowed by the SEC has gone this week after spring practice was called off due to concerns over the coronavirus.

“I’ve loved the new strength staff and how they operate the workouts we’ve been doing and along with the coaches and the (virtual) meetings we have, and just kind of give us life lessons, too, making sure are we’re good academics-wise,” Catalon said. “Altogether it’s been really great so far and I’m excited to see how things go down the road.”

“I know one thing: we all fought so hard in the winter to get our conditioning better and how to get stronger because we’re going to be playing a whole different type of football again,” Morgan said. “To be able to maintain that this spring when we’re not there is big for our whole football team. Just for the whole state of Arkansas to see that we put a bunch of work in just in the three months of this new coaching staff being here.

“I know every single person on the team has a chip on their shoulder and do not want it to fade away, so everyone is taking care of their business.”

Morgan was asked to expound on the different type of football he mentioned.

Catalon was one of Arkansas’ highest-rated recruits in the 2019 class, but he only played in three games and recorded six tackles.

He doesn’t think it had to do with a shoulder injury that resulted in him having surgery for a slight tear in his labrum.

“I don’t know. That was kind of a coaching-and-player thing,” Catalon said. “At the end of the day, last year was just last year. I am not worried about what happened last year, just worried about the future and down the road.

“I’ll just go out there, get a game under my belt and play, get some reps in and stuff like that. At the end of the day, I am just worried about what is down at the end of the road for me, helping this team out and being the best that I can be and I plan on doing the same thing for fall camp, working hard, keeping my head down and just making sure I put my defense and my team in the best situation it can be for it to be successful.”