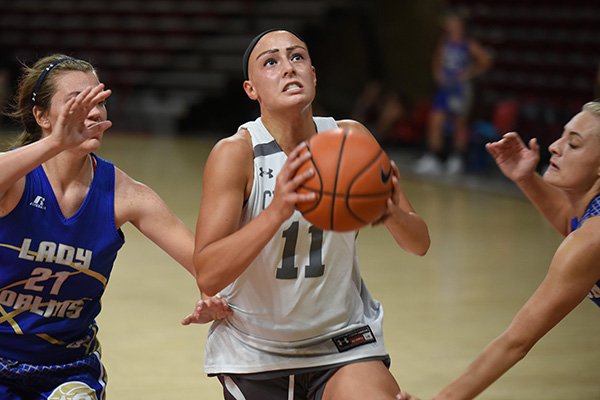 Rylee Langerman of Christian Heritage High School in Del City, Okla., drives to the basket during the Arkansas women's basketball team camp on Tuesday, June 11, 2019, at Bud Walton Arena in Fayetteville. Camps and clinics hosted by the Razorbacks' coaches have been canceled this summer because of the coronavirus pandemic.

FAYETTEVILLE — Summer camps, including sports camps hosted by Razorback coaches, have been canceled at the University of Arkansas this year.

The cancellation, which is for camps through at least Aug. 31 and was prompted by the coronavirus pandemic, affects at least 180 separate youth camps or clinics that were scheduled to be hosted in 13 of the sports sponsored by the Razorbacks, including football, men’s and women’s basketball, and baseball.

According to a UA spokesperson, the university hosted around 5,000 campers last summer, including for non-sports camps.

The UA athletics department reported $46,655 in revenue from camps in fiscal year 2018. Most camps are operated independently through agreements with the university’s head coaches, and revenue is generated through rental fees to use the UA’s playing venues.

On Friday, the Southeastern Conference announced it would suspend all coaches' camps and clinics on its campuses through at least the end of May. Summer camps are used to teach skills in various sports, and also allow coaches to evaluate potential recruits.