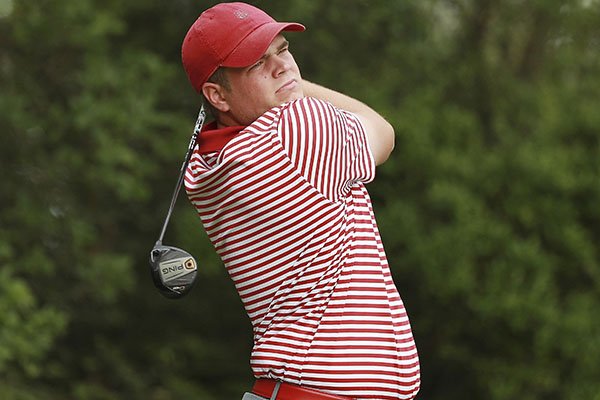 Mason Overstreet of Arkansas hits a tee shot during the Valspar Collegiate Invitational at the Floridian on Monday, March 18, 2019, in Palm City, Fla. (AP Photo/Scott Halleran )

Due to the cancellation of the spring seasons across the NCAA because of the coronavirus pandemic, the NCAA has voted to allow its members to extend scholarships for another year to seniors and extra seasons to the other classifications, even if it means exceeding roster and scholarship limits.

Senior Mason Overstreet said he has talked to McMakin and intends to restart his senior season of eligibility in the 2020-21 school year.

"I think it's probably in my best interests to come back, granted that all the scholarship stuff gets worked out, which we're still waiting to see on that," Overstreet said on a teleconference arranged by the UA on Thursday. "I think I will come back for another year and try to see what kind of damage we can do next year with three of us guys coming back, and then all the guys that we'll have in next year as well."

McMakin seemed to indicate seniors Overstreet, William Buhl and Tyson Reeder, who have all won tournaments, would be in line to return. Luis Garza is still in question.

"Hoping that they all come back, but we have Luis Garza in Mexico, and he's really uncharted right now on how things are going to go over there in Mexico throughout this period," McMakin said.

"We know we get an extra year of eligibility back, but is there going to be the funding in place is the biggest question," Taylor said. "Grace's intentions are to come back to school. She's a big part of what we do, and obviously if we can have her back and everything works out perfect, then that's what she'll do."

Like the other spring sports, most Arkansas golfers -- many of them international students -- have returned home since the SEC on March 17 canceled all spring competitions and practices.

One player on each squad has remained in Northwest Arkansas, and they are both being well taken care of, McMakin and Taylor said on the teleconference.

Sophomore Julian Perico of Lima, Peru, is living in town because returning to his home country is not allowed.

"They've got a shutdown in Peru, obviously, and he can't get home," McMakin said. "For him, catching up on school is very important. We had a very busy spring, and we always get a little bit behind during this time of year."

Perico started the fall with a second-place finish at the Carmel Cup and was playing well with a team-best stroke average of 70.38. The Razorbacks' lone participant as an individual at least year's NCAA Championships at Blessings Golf Club, Perico has spoken in the past about the effort it takes to stay on top of his academics. He's now getting plenty of time to do so.

"I talk to him every day to get him to stay on top of his schoolwork," McMakin said. "He's in a good frame of mind, and he's just going to try to get through this. He doesn't know if he'll even get home for the summer. He may be here until the first of the year. So hopefully in the next couple of months, golf will be back on its feet and he'll be able to start practicing his game."

Mistry, off to a great start with a fourth-place finish at the ANNIKA Intercollegiate, said she looked into an itinerary for returning to South Africa but decided against it.

"It was my parents' and my decision to stay," Mistry said. "I think in South Africa especially, the resources aren't the best. The virus hadn't really gotten there yet, but you knew it was going to come. So the question was, where was it safest for me to be? And flying for 30 hours, the odds of me getting it are extremely high, especially when you fly through Europe, which I didn't want to do. It's gotten really bad there."

Mistry said her parents were on Day Six of a mandatory 21-day curfew in Johannesburg.

She said she is grateful Gwen and Terry Matthews took her in.

"So I'm really lucky," she said. "She's got a lovely family. Her mom and her dad have been super helpful and also are really nice. I've gotten really close to [Brooke], which is really nice."

Mistry said she has been playing tennis with Brittany Matthews, Brooke's younger sister, and hitting balls into a net in the family's garage.

"I've been working technically on my swing, which I don't think I would have had time to do because of the postseason, so I'm really doing a lot of little things on my swing," she said.

While Mistry and Perico are unable to get out to ranges or courses in Northwest Arkansas, Overstreet and Reeder in Oklahoma and Buhl in Alabama have been able to play some.

"I've been here about two-and-a-half weeks now," said Overstreet, who lives in Kingfisher, a town of about 4,900 people a short drive from the northwestern Oklahoma City suburbs. "We actually just had our first positive [coronavirus] test just [Wednesday], so stuff is starting to close down here as well.

"Luckily the golf course is still open, so I've been able to get out and play a few rounds here and there by myself most of the time."

Taylor and McMakin repeated a few times that staying up on schoolwork and keeping safe are larger concerns for their players than how much practice time they can get.

"I've challenged my team to try to become an elite thinker," Taylor said. "We can't do the golf course technical stuff, but we can do things to become better and smarter in the way we think and our belief systems.

"Hopefully in their free time they're using this opportunity to dig deep and become tough upstairs mentally. That's a huge part of our sport, and a part that I think sometimes we don't cultivate enough. Once we start seeing some light at the end of the tunnel, we can start worrying about trying to get them back out on the golf course."

McMakin said he's trying to prepare his team to focus on having a big 2020-21 season.

"We're mainly trying to stay healthy and stay safe right now, and golf is kind of on the back burner," McMakin said. "As soon as we get an opportunity with a course or two back open, we'll get back out there."