On this date in Razorback history, April 4 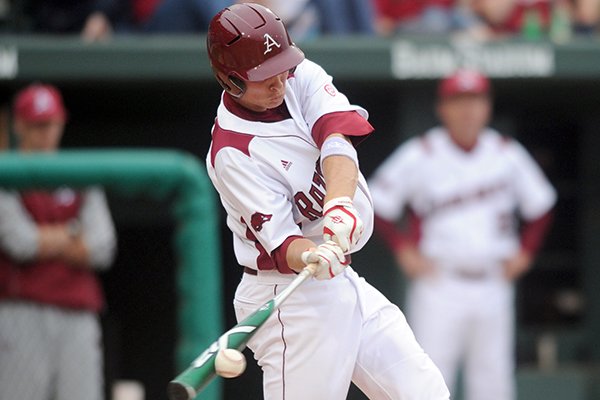 Arkansas outfielder Collin Kuhn bats during a game against Georgia on Friday, April 16, 2010, in Fayetteville.

Collin Kuhn hit a two-out grand slam in the bottom of the ninth inning to give Arkansas a thrilling 17-16 rubber-game win over Kentucky on Easter.

Kuhn’s homer capped a crazy game in which the Razorbacks scored 13 straight runs after falling behind 5-0, but the Wildcats scored 11 straight to take a 16-13 lead to the final inning. With the wind blowing out at 25 mph, the teams combined to hit seven home runs.

“As a player and a head coach, that might have been the craziest game I’ve ever been involved in,” Arkansas coach Dave Van Horn said at the time.

After Jared McKinney walked with one out, the Razorbacks put three consecutive hitters on base with two outs in the ninth. James McCann singled on a 3-2 pitch to bring pinch hitter Andy Wilkins to the plate. Wilkins had suffered a hamstring injury a day earlier that significantly hampered his running ability, so the only way he could extend the game was to hit a ball to the outfield or draw a free pass. He walked on a full count.

Kuhn’s homer came on a 2-2 pitch from Kentucky reliever Matt Little. His right, dominant hand came off the bat as he swung, but he hit it well enough to get the ball into the wind, which carried it into the Arkansas bullpen beyond the left-field fence. Kuhn finished the game 4-for-5 with 4 RBI and 3 runs scored.

"Coming from behind to win in the ninth, it doesn't get any better than that,” Kuhn said.

The moment carried extra significance for Kuhn, whose parents attended the game from his hometown in Beaver Dam, Wis. His mother, Karen, had recently undergone surgery to remove her voice box in an effort to treat throat cancer. Van Horn choked up when he saw her during his postgame interview on the field.

"I'm sorry, not sure I can talk right now," Van Horn said. "That's pretty special for her to be here to see Collin do that. Unbelievable for her and for him today….I need to pause for a second or I may lose it. What a day."

The win over Kentucky was the second in a 13-game win streak for the Razorbacks, who peaked two weeks later at No. 7 in the national coaches poll.