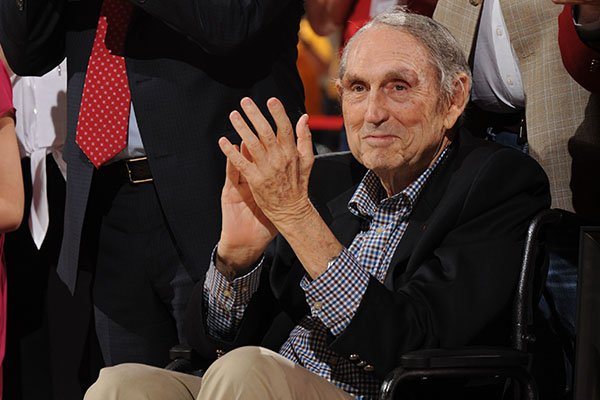 Former Arkansas coach Eddie Sutton (center) watches Saturday, Feb. 20, 2016, as he is surrounded by family, administrators and former players as a banner honoring him is dedicated in Bud Walton Arena during a ceremony at halftime in Fayetteville. Sutton coached Arkansas from 1974 to 1985 and led the Razorbacks to the Final Four and a third-place finish in 1978.

FAYETTEVILLE -- The seventh time was the charm for Eddie Sutton making the Naismith Memorial Basketball Hall of Fame.

Sutton, who got 260 of his 806 victories as a college head coach at the University of Arkansas, received the call Friday at his home in Tulsa that he is being inducted into the Hall of Fame, sources confirmed to the Arkansas Democrat-Gazette. The news also was first reported by the Tulsa World.

This year marked the seventh time since 2002 that Sutton, 84, had been a finalist.

"Finally," tweeted Darrell Walker, the University of Arkansas at Little Rock coach who was an All-American guard for Sutton's Razorbacks as a senior in 1983.

The official announcement of the 2020 Hall of Fame inductees will be made at 11 a.m. today on ESPN. The induction ceremony is scheduled for Aug. 29 in Springfield, Mass.

Sutton will be the second Arkansas coach to be inducted into the Naismith Hall of Fame. Nolan Richardson, who succeeded Sutton as the Razorbacks' coach for the 1985-86 season and led Arkansas to the 1994 national championship, was inducted in 2014.

Sidney Moncrief, who starred at Little Rock Hall High School and was an All-American for Sutton's Razorbacks in 1978 and 1979 before a long NBA career, was inducted into the Naismith Hall of Fame last year. Moncrief is the only Arkansas player in the Hall of Fame.

"Jumping with Joy: finally EDDIE SUTTON elected to the @Hoophall Hall of Fame," read a tweet from Dick Vitale, the long-time ESPN analyst and a former coach at the University of Detroit and for the NBA's Detroit Pistons. "So happy for Eddie & his family!"

Sutton had an 806-326 record in 37 seasons -- including 260-75 in 11 seasons at Arkansas from 1975-85 -- with 26 NCAA Tournament appearances. He was the first coach to lead four different colleges to the NCAA Tournament while he was at Creighton, Arkansas, Kentucky and Oklahoma State.

"My college coach Eddie Sutton has been elected to the Naismith Hall of Fame," Rex Chapman, who played for Sutton at Kentucky, tweeted. "I could cry. Thanks Coach. It's about damn time."

"Congratulations to Coach Sutton getting the Naismith Hall of Fame," tweeted Arkansas assistant coach Corey Williams, who played for Sutton at Oklahoma State and was a Cowboys student coach. "He is well deserving of this honor. Proud to have played for him."

Sutton led the Razorbacks to NCAA Tournament appearances in his final nine seasons at Arkansas, including appearances in the Elite Eight in 1979 and Sweet 16 in 1981 and 1983.

A native of Bucklin, Kan., Sutton is a member of the Collegiate Basketball Hall of Fame, the state sports halls of fame for Arkansas, Kansas and Oklahoma, and the sports Hall of Honor at Arkansas and Oklahoma State.