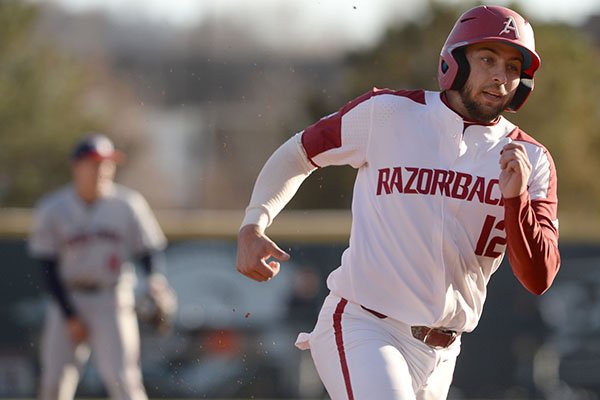 Arkansas catcher Casey Opitz heads to third base Friday, Feb. 21, 2020, on his way to the plate on a single by Robert Moore during the fifth inning at Baum-Walker Stadium in Fayetteville.

The Arkansas Razorbacks junior catcher is eligible for whatever semblance of a draft that MLB fashions this summer in the coronavirus pandemic’s worldwide wake.

Canceling the 2020 collegiate season because of the virus menace affects potential livelihoods for all draft-eligible juniors considered pro baseball prospects.

Ironically, canceling the season may affect some prospects for the better.

The NCAA for 2021 restored the 2020 class eligibility for all athletes in spring sports.

That means this year’s baseball juniors would be draft-eligible juniors in 2021 with a 2022 senior college season available.

It expands options. Especially for some.

The juniors the scouts figure as prime candidates, like Razorbacks preseason All-Americans Heston Kjerstad and Casey Martin, should go within the first two rounds. Presumably, they get lucrative offers whether the draft is the traditional 40 rounds or just five rounds, which Arkansas Coach Dave Van Horn foresees as a possibility.

So some scouts sounded skeptical.

“It’s a mix,” Van Horn said. “They don’t know Casey like we know him. As far as the total package, the mental part of it, the defense and the offense, I feel like Casey is probably one of the top three catchers in the country. There are some scouts that are not sure.”

Got to be past hitting that haunts.

He muscled up in the offseason and heeded advice of hitting coach Nate Thompson.

“I made a lot of adjustments in my swing - timing, being more aggressive in my approach,” Opitz said. “There were a lot of things we improved on. I felt good with where we were at and where we were going.”

He should be going pro, working out back home in Centennial, Colo., as UA classes now improvise online. But he would be working just as hard if coming back to Arkansas, which he doesn’t rule out.

“When the time gets closer, just to have where that is an option, that’s unbelievable, Opitz said.

Van Horn expects somebody professionally seeing what he sees in Opitz. But if they don’t and lowball their offer?

“Obviously we would love to have him back,” Van Horn said. “I think he would get his money next year. He knows that option is there and I’m happy for that.”