Hogs had some 'swine intervention' at Oxford 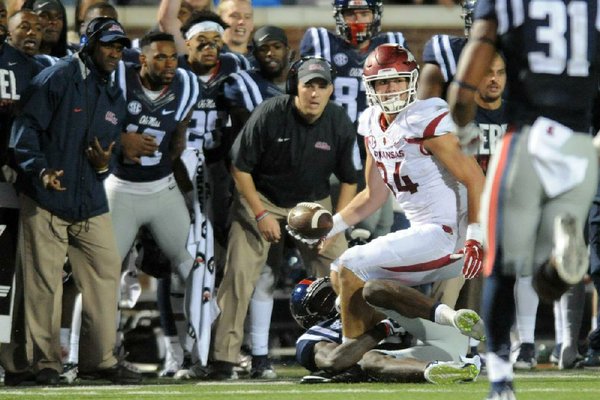 Arkansas tight end Hunter Henry prepares to lateral the ball backward as he is dragged down by Ole Miss defensive back Tony Bridges on fourth and 25 during the overtime period of the game on Nov. 7, 2015, in Oxford, Miss. Arkansas’ Alex Collins scooped the lateral and converted the fourth down. The Razorbacks eventually won 53-52. (AP photo)

FAYETTEVILLE -- A game doesn't earn its own nickname unless it's a whopper.

The "Henry Heave" game for the University of Arkansas was a double whopper, with cheese. It spawned its own episode of ESPN's Sports Science, such was the weirdness of the game's key play.

On the subject of longest odds in a Razorback football win, Arkansas' 53-52 overtime triumph at Ole Miss on Nov. 7, 2015, probably tops them all, even both Miracles on Markham, because the game seemed over -- should have been over -- on two different plays in overtime.

Need proof? Just look at the pictures captured by the Arkansas Democrat-Gazette on that fall evening which show Ole Miss Coach Hugh Freeze and others on the Rebels' sideline raising their arms in the universally understood gesture of triumph.

More on that later.

The name of the game comes from Hunter Henry, the acclaimed Arkansas tight end from Little Rock who would go on to win the Mackey Award as the nation's top tight end that season. His no-look, underhand heave on the Ole Miss sideline while being tackled 12 yards shy of first-down distance on fourth and 25 from the Ole Miss 40 touched off the insanity that was to follow.

And there's a lot to unpackage.

First of all, the largest share of credit on the play has to go to Alex Collins, who was in the backfield when Brandon Allen unleashed the check-down throw to Henry with the Rebels' defensive backs blanketing the deeper throws.

Arkansas' 6-10 tackle Dan Skipper was the first person to touch the "heave," just getting a fingertip on it at the top of his jump near the line of scrimmage. His touch put the proper rotation and angle on the ball for it to take one hop into the waiting arms of Collins, who was already gaining a head of steam.

I've heard or read that several Ole Miss defenders "gave up" on the play, but I never saw that. It looked like all 11 were engaged and running full tilt to rush the passer, tackle Henry or chase Collins.

My vantage point on the play was about 5 yards off the Arkansas sideline on about the 13-yard line. When I saw Allen's throw across the field and well short of the line to gain, I thought "game over." I didn't see Henry's heave, but a couple of seconds later I saw Collins hauling ass in my direction with an escort of Jeremy Sprinkle, Drew Morgan and Denver Kirkland.

I had no idea how Collins got the ball. One of his last jukes threw defenders off stride just long enough for him to surge past the 15-yard line for a first down. On the replay, I can spot myself walking up close to the sideline on the 13 in a state of confusion.

Speaking of confusion, both Collins and Henry thought (in error) that Arkansas had to score on the play. So Collins intentionally lateraled onto the turf as he reached the 10. Ole Miss could have ended it right there with a fumble recovery, but Arkansas receiver Dominique Reed, who joined Morgan in having monster statistics in that game, cradled it on the 11.

Two plays later, Morgan caught a 9-yard touchdown pass, his third of the game and Allen's sixth to bring the Razorbacks within 52-51.

Coach Bret Bielema had already made the decision that the Razorbacks were going for the two-point conversion. The Razorbacks' first effort was a disaster, with Allen rolling out and getting quickly swarmed. Arkansas caught a break, however, as Marquis Haynes grabbed Allen's facemask on the sack, giving the Hogs another try from the 1 1/2 yard line.

Allen took a hard shot as he crossed the goal line on a keeper over the right side, but he hung on to the ball and delivered the Razorbacks' second of four consecutive wins over the Rebels.

Collins rushed for 108 yards yards and Kody Walker had 49 to give Arkansas some balance, but Morgan and Reed were massive in the passing game. Reed, whose profile rocketed around midseason after injuries to Keon Hatcher and Jared Cornelius, had seven catches for 105 yards and two touchdowns and made a spectacular leaping catch that gave Arkansas a shot at a game-winning field goal. Reed's catch, with one leg way off the ground as he was being upended, on a 21-yard throw from Allen came with three seconds left. Cole Hedlund came on for a potential game-winning 47-yard field goal, but it was blocked by Tony Bridges, who minutes later would have Henry's legs wrapped up on the Ole Miss 27 before his fateful fling.

Among the most interesting facets of the shootout was the score was tied at the end of every quarter and neither team ever led by more than seven points.

Allen was carried off the field by thankful teammates after he outdueled Ole Miss' Chad Kelly by completing 33 of 45 passes for 442 yards and the 6 scores. Kelly passed for 368 yards and 3 touchdowns and ran for 110 yards and 3 more scores, but he did not get a chance to answer the Razorbacks' game-winning heroics.

Bielema famously mis-spoke in the postgame interview room beneath Vaught-Hemingway Stadium, when he said he was going to "jump on my wife" before correcting that to say "airplane."

"Henry Heave" and "Swine Intervention" were among the headlines used by media outlets to describe the game, but the former took off and made its way into Razorback football lore.