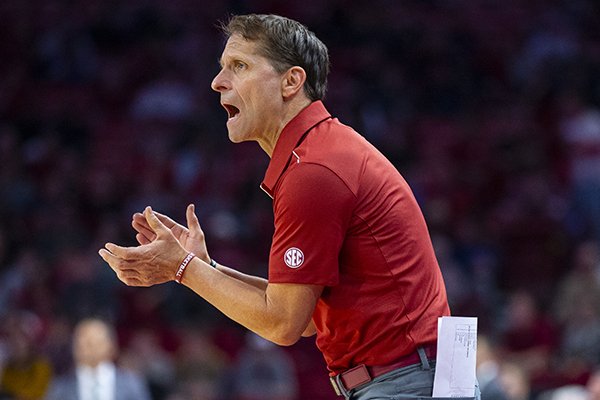 Arkansas coach Eric Musselman and his wife, Danyelle, hosted a 30-minute live question-and-answer session on his Instagram account Sunday evening. Here are a few of the highlights:

Negative recruiting in the SEC

Musselman was asked by a fan to describe the biggest differences coaching in the Mountain West Conference and Southeastern Conference, and it led to what I thought was the most interesting answer of the entire Q&A.

He and his staff have put forth strong efforts in recruiting since arriving at Arkansas, and he began his breakdown there, noting that there is much more negative recruiting in his current league than anything he experienced in his last stop.

“I think the Mountain West coaches were really respectful to one another, you know, and just worried about recruiting the right way and worried about their own programs,” he said. “I haven’t really experienced that coming into this league, which is pretty unfortunate because it’s hard enough to coach and recruit to your own team.

“When you start worrying about and saying negative things about other people in your own conference, it’s not good for the conference.”

His second point was geared toward the overall athleticism and length of players in the SEC. There are more athletes and good rebounders who make up the 14 teams than in any league in America, he said.

The head coaches in the SEC, as a group, are as good as any in college basketball, he added. Musselman mentioned John Calipari, Tom Crean and Buzz Williams as coaches he admires.

“There are so many guys that have great class,” he said. “Those guys are awesome to try to compete against.”

Musselman has another video to release

If it were up to Danyelle, her husband's quirky and fun 2-3 minute videos would be a thing of the past, she joked, but he said one more might be on its way soon.

Shortly after the 2019-20 season ended abruptly, Musselman released three videos that made the rounds on social media. The first clip was of Musselman coaching and shouting instruction in Arkansas’ Basketball Performance Center as he would in any other practice, except there were no players.

The second featured him in Bud Walton Arena’s interview room, where he regularly met with reporters to preview and review games. It included jokes and personalized one-liners directed at media members from his seat behind the microphone.

And the third video showed him coaching a game in an empty Bud Walton Arena, often yelling the names of players expected to be on his 2020-21 roster. All three skits were well-received by Arkansas fans, but they apparently ruffled some feathers around the SEC.

“We don’t want to upset any of the other SEC assistant coaches or anything,” Musselman said laughing. “But we might actually put out another video.”

After the fake press conference video surfaced, an assistant coach in the SEC posted a tweet that read as something of a jab at the Arkansas coach. Sunday, after the above quote spread around Twitter, the assistant retweeted then un-retweeted his near-month-old tweet.

Most memorable games to this point in his Arkansas tenure

As a coach, not much beats earning a hard-fought win on the road, and three wins away from Bud Walton Arena stood out to Musselman: Indiana on Dec. 29, Georgia Tech on Nov. 25 and Alabama on Feb. 1.

The Razorbacks entered the back end of their previously scheduled home-and-home series with the Hoosiers at 10-1 and were coming off a narrow win over Valparaiso in North Little Rock the week before. Arkansas overcame an 11-point second-half deficit to knock off Indiana and enter SEC play on a high note.

“When I was growing up, Bobby Knight was coach at Indiana and my dad was the coach at Minnesota,” Musselman said. “I actually went on two road trips to Bloomington, Ind., when I was very young with my father, so that win, because of the history of Assembly Hall, was really, really special and will be a lifetime memory for me.”

He added that Assembly Hall was the loudest road crowd Arkansas faced this season.

Junior guard Mason Jones pushed the Razorbacks to 6-0 in Musselman’s first season with a deep 3-pointer off the glass, dropping the Yellow Jackets in dramatic fashion in overtime. Jones’ bucket was the lone Arkansas score in the extra period.

The Razorbacks found themselves with their backs against the wall early in Tuscaloosa, Ala., but they got the last laugh on the first day in February. After falling behind 12-0 to begin the game, Arkansas beat the Crimson Tide 82-78 behind 30 points from Jones and 26 from Jimmy Whitt.

“We were hurt and kind of banged up,” Musselman said of his team. “That was another great win as well.”

Encouraging players to take care of business academically and athletically

Considering his players are away from campus, staff and team facilities at the moment due to concerns over the coronavirus, Musselman was asked what they are doing right now and what his message has been to them.

He said the main focus is making sure players are taking personal responsibility for their academics. If you don't get it done in the classroom during this time, you can't play ball when everyone reconvenes.

From a basketball standpoint, Musselman noted his guys are having to take an old school approach. He is hopeful they are getting shots up on outdoor courts and continuing to work out on their own.

"A lot of guys are just kind of doing stuff in their garage - pushups, jumping jacks, jumping rope," he said. "You want to keep your cardio. Players that utilize this time most are going to make the biggest jump when we all get back together."

Musselman himself is still working out on a consistent basis, getting in a couple hours of work each morning in his garage.

He estimated that he drinks only 1 Diet Pepsi per half

It is assumed that many coaches in college basketball drink either water, Gatorade or Powerade on the sideline during games. I feel like that’s fairly standard.

We all learned quickly last season that Musselman does not go that route.

He prefers small bottles of Diet Pepsi. Musselman explained that his mother, her dad and her brother owned Pepsi plants in Ohio and Texas. Pepsi has always been a big part of his family, he added.

“I only sip on it, though,” Musselman said of his in-game habit. “It looks like I’m drinking Diet Pepsi all game, but it’s not as bad as it looks.”

Danyelle noted that Musselman’s staff is so large that some of the team managers do not have seats on or behind the team bench. Their daughter, Mariah, often walks around the arena during games, which leaves a seat open for a manager.

“One day one of the managers was sitting next to me," Danyelle said, "and I was like, ‘What is your job this game?' He was like, ‘I have the important job.’ He had the Diet Pepsi job.”