THIS WEEK IN ARKANSAS ATHLETICS 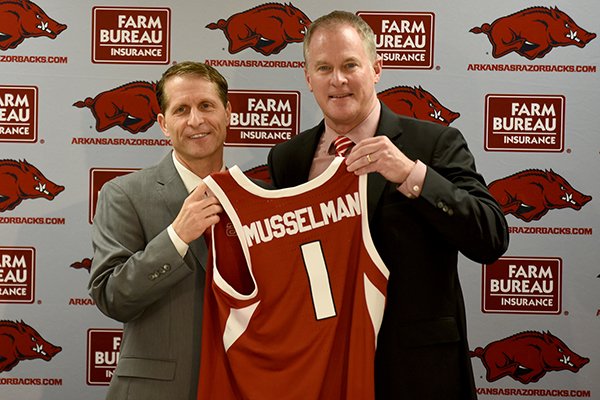 Freshman Patrick Wicklander threw five shutout innings and the Razorbacks blanked Auburn 8-0 to win a road series at Plainsman Park in Auburn, Ala.

Wicklander (3-1) allowed 2 hits and walked 3 while striking out 6 Tigers in his 96-pitch outing. Cody Scroggins allowed one hit in one inning, and Zebulon Vermillion struck out three in three shutout innings for his first save as a Razorback.

Arkansas had outlasted Auburn 9-6 in 15 innings in the second game of a doubleheader the night before to snap a four-game losing streak. In that game late Saturday night, the Tigers thought they had won in the bottom of the 12th inning and even had a dog pile on the field before a replay review changed a call on left fielder Christian Franklin's throw to home plate.

In Sunday's rubber match, Heston Kjerstad hit a two-run single in the third inning to get the scoring started. Trevor Ezell added a three-run home run in the fifth inning off Richard Fitts (2-1), scoring Casey Opitz and Franklin ahead of him to give the Razorbacks separation.

Arkansas put the game away with a three-run seventh. Casey Martin walked and scored on Dominic Fletcher's double. After Matt Goodheart's fly ball moved Fletcher to third, Jack Kenley walked and stole second before Jacob Nesbit drove in two runs with a single.

Former Arkansas guard Patrick Beverley was selected as Eurocup MVP for the 2011-12 season. Beverley averaged 12.9 points, 4.1 rebounds, 3.3 assists and 2.0 steals for his Russian team, Spartak St. Petersburg. He led Spartak to the Eurocup finals against BC Khimki, which is based in Moscow.

Beverley, now in his eighth season in the NBA, plays for the Los Angeles Clippers.

Aurelija Miseviciute downed Martina Banikova 6-2, 6-2 for her 45th victory, a school single-season record. She broke the mark set by Lori Zacharias in 1981.

Eric Musselman was hired as Arkansas' basketball coach after leading Nevada to a 110-34 record the previous four seasons, including three consecutive Mountain West Conference regular-season and tournament championships and three consecutive NCAA Tournament appearances. He received a 5-year contract with an annual salary of $2.5 million that included a $5 million buyout if he leaves after either of his first two seasons. The deal also included a no-compete clause that prevents from taking another SEC job.

Musselman, who also was an NBA head coach with Golden State and Sacramento, led the Razorbacks to a 20-12 record this season. Arkansas won its SEC Tournament opener 86-73 over Vanderbilt before the remainder of the tournament and subsequently the rest of the college season was canceled by the coronavirus pandemic.

The Razorbacks scored a school-record 14 runs in the first inning of a 32-8 romp over Saint Louis.

The teams combined for 40 runs, the most in an Arkansas game in school history.

Katy Henry pitched a three-hit shutout as the Arkansas softball team beat No. 23 Florida 1-0 in Gainesville, Fla. Whitney Cloer's single in the sixth scored pinch-runner Hillary Freeman on a head-first slide into home for the game's only run.

Mary Haff fired a one hitter and got all the support she needed in the first inning of the No. 20 Razorbacks' 4-0 win to open an SEC series at No. 11 South Carolina in Columbia, S.C.

Haff (17-2) retired 18 of the first 19 batters she faced, giving up only a hit by pitch, and took a no hitter into the seventh inning before allowing a leadoff single. She rallied to retire the next three batters to polish off her fifth one-hit outing of the season.

Freshman Tim Carver gave Arkansas its first lead with a two-run single to put the Razorbacks ahead 8-7 in the fifth inning. Andrew Darr, from Gilbert, Ariz., went 3 for 4 with 4 RBI to lead Arkansas' comeback.

The women's gymnastics team advanced to the NCAA Championships for the first time in its fourth year of existence by taking second behind No. 3 Florida at the South Central Regional at Barnhill Arena.

Seniors Dana McQuillin and Katie Hardman turned in the most critical performances, anchoring Arkansas' beam lineup with scores of 9.775 and 9.850.

John Pelphrey was introduced as Arkansas' basketball coach after Dana Altman backed out of the job and returned to Creighton. Pelphrey came to Arkansas from South Alabama, where he led the Jaguars to records of 24-7 and 20-12 his last two seasons.

Pelphrey was fired at Arkansas with a 69-59 record in four seasons. He is now the head coach at Tennessee Tech.

Susie Gardner was introduced as the Razorbacks' new women's basketball coach. She replaced Gary Blair, who left after 10 seasons to become coach at Texas A&M when he didn't receive a contract extension.

Gardner came to Arkansas from Austin Peay, where she had a 112-92 record in seven seasons and led the Lady Govs to three consecutive Ohio Valley Conference championships and NCAA Tournaments.

Gardner went 64-54 at Arkansas, including 16-40 in SEC play, and resigned after four seasons. She is now the coach at Mercer.

Nolan Richardson was hired as Arkansas' basketball coach to replace Eddie Sutton, who resigned after 11 seasons to take the Kentucky job.

Richardson came to Arkansas after five seasons at Tulsa, where he led the Golden Hurricane to a 118-37 record in five seasons, including the 1981 NIT championship and three NCAA Tournament appearances.

Richardson was at Arkansas for 17 seasons and led the Razorbacks to a school-record 389 victories and the 1994 NCAA championship. He also guided Arkansas to the Final Four in 1990 and 1995 among 13 total NCAA Tournament appearances.

Athletic Director Jeff Long announced the firing of successful coach Bobby Petrino with cause, meaning the coach had no legal claim to the huge buyout in his contract.

Petrino was fired for his failure to disclose his relationship with Jessica Dorrell before or after hiring her to a position in the football program and for providing her $20,000 to help purchase a car.

In his letter to Petrino detailing his reasons for the dismissal, Long wrote, "you deliberately failed to tell me that you had engaged in an extra-marital affair with Ms. Dorrell over a period of several months leading up to your recommendation to hire her. As such, you used your University position to advance your personal interests in violation of the University's policies on conflict of interest. If you had been forthcoming with me about the true nature of your relationship, I would not have approved the hiring of Ms. Dorrell for this position."

The Arkansas golf team shot 23-under par to capture the All-American Intercollegiate event at The Woodlands, Texas, its school-record seventh title of the season, under Coach Brad McMakin.

The Razorbacks also captured the Gopher Invitational, the Golfweek Challenge, the Windon Memorial Classic, the Cabo Collegiate, the John Hayt Invitational and the Callaway Match Play title with victories over Washington State (3 and 2), East Carolina (4 and 1), Tennessee-Chattanooga (5 and 0) and Duke (3-1-1) prior to snaring the All-American.

The team was led by honorable mention All-Americans Sebastian Cappelen, a sophomore, and senior Ethan Tracy. Junior Austin Cook, who was named the SEC's scholar-athlete of the year, was an All-American the next season. Other key players on that team were Kolton Crawford, who was selected to the SEC All-Freshman team, sophomore Josh Eure and freshman Thomas Sorenson.

Arkansas placed fifth at the SEC Championships and sixth at the NCAA South Central Regional at The Club at Olde Stone in Bowling Green, Ky.

Morris broke the record of 15-1½ set by former Razorback Tina Sutej in 2011 at the SEC Championships.

Lewis went on to win the 2007 NCAA individual title and is now playing on the LPGA Tour. She has won two major championships: the Kraft Nabisco Championships in 2011 and British Open in 2013.

Christy Smith, a four-year starting point guard who led the Lady Razorbacks to the 1998 Final Four as a senior, resigned as a UA assistant coach to become the head coach at Incarnate Word, a Southland Conference school in Houston. Smith is a member of the UA Hall of Honor and Arkansas Sports Hall of Fame.

Hamblin went 4 for 5 with solo homers in the third and sixth innings, a two-run shot in the eighth, a double in the first and scored four runs.

Blake Parker hit two home runs, while Jake Dugger, John Henry Marquardt and Ben Tschepikow hit one apiece in the Hogs' onslaught. Parker and Marquardt had three hits each and Arkansas posted 12 extra-base hits, including a triple by Clay Goodwin, among its 18 total.